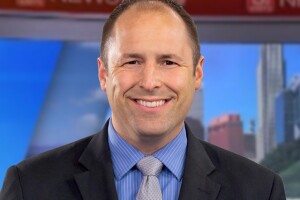 Jake Wasikowski joined KMTV 3 News Now as the Senior Reporter in September 2012. Excited to be back in his hometown of Omaha, he finds it surreal working at a place just down the road from where he grew up.

Jake previously spent about two years at another TV station in the Omaha market; and nearly three years at KSBI in Oklahoma City, where he worked as an anchor/reporter and covered many major court cases. While there, he also hosted a pre- and post-game Show for the Oklahoma City Thunder. Other highlights included witnessing the initial announcement of the NBA team as well as the unveiling the team’s name and logo; and covering Game 6 of the 2010 NBA Playoffs against the Los Angeles Lakers.

Jake also worked as the weekend anchor/reporter at NTV (KHGI) in Kearney for four years. While in Central Nebraska, he earned multiple Nebraska Associated Press Broadcast Awards in the investigative and agriculture categories.

He graduated from University of Nebraska-Lincoln with a degree in broadcast journalism.

Coming back to Omaha is something Jake looked forward to for a while. He grew up in the metro, and is a graduate of Ralston High School. Being able to tell the stories of the community which has been such a large part of his life is something he expects to be very rewarding.

Jake enjoys spending time with his wife, Tara; his son, Cade; and his Jack Russell Terrier named Sonny. When not at work, Jake enjoys running, playing sports, singing karaoke, and wearing anything that has a Lacoste alligator on it!