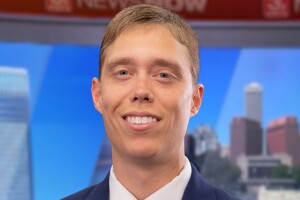 John Madden joined KMTV 3 News Now in April 2019. John grew up in Aurora, Colorado just outside of Denver. He spent the last two-plus years working for KREX in Grand Junction, Colorado as the Weekend Anchor and Reporter.

Journalism runs in John’s family, his Uncle Larry was an accomplished writer. John followed the same path to work in print journalism but ultimately got into broadcasting. While in Grand Junction, John covered a wide variety of topics from the impacts of legal marijuana, immigration, and deportation, and outdoors-related stories. John won the 2018 MCCOA “Television Journalist of the Year” award also during his time at KREX.

When he’s not working, John enjoys going hiking with his dog Blu. He also enjoys writing, reading, and watching baseball. If you have a story idea for John, send it his way at john.madden@3newsnow.com and follow him on Twitter (@JohnMaddenTV) and Facebook (John Madden - KMTV).