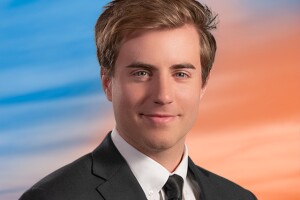 For the last three years, Kent has been anchoring and reporting in Missoula, MT for KPAX News. Kent says there is a lot going on in Montana. He was there when the state burst into flames for a historic wildfire season. This is where Kent saw the importance of journalism. "Evacuations, air quality and new fire starts were so important for those residents impacted. We were there to help inform them before, during and after this emotional event," Kent added.

His time in Montana was also spent covering politics. Kent says these past few years, Montana has been an unusual political battle ground as the President visited four times. Plus, the current Montana Governor recently announced he is running for president, another historic first for the state. Kent says he enjoys covering politics and getting answers from our country's leaders.

Kent graduated from the University of North Dakota. During his time in college, he was on the Track & Field team. He was a 400 meter hurdler and 4x4 relay runner.

Kent loves to travel. He spent a semester studying in Australia, worked in Ireland for a summer and was a contestant on one of Norway's top reality shows, Alt For Norge.

Kent says Journalism is his passion. He is dedicated to storytelling that matters and wants to continue to make a difference through his reporting. He loves using social media to connect with viewers and discuss stories.

If you have a story idea for Kent, reach out to him! His email is kent.luetzen@3newsnow.com, or reach him at Kent Thomas Luetzen on Facebook. He's also on Instagram and Twitter. (@kentluetzen)