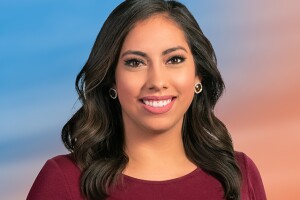 Maya Saenz is a bilingual multimedia journalist who first joined KMTV 3 News Now News in March 2016 Maya began her career at KMTV as a reporter and was promoted to morning anchor in January of 2019. She currently anchors evening broadcasts.

Before moving to Omaha, Maya was the Assignment Editor for Telemundo Denver, where she contributed to the extensive coverage of the Aurora Theater Shooting trial, the booming marijuana industry, severe weather, the Planned Parenthood shooting, and the Longmont Craigslist attack, where a woman cut the baby out of a pregnant woman’s womb.

During her time with Telemundo Denver, Maya and her team won several awards from the Colorado Broadcast Association, including ‘Best Breaking News’ coverage and ‘Best Spanish Speaking TV Station of the Year’ in Colorado.

Since Maya was six years old, she watched the news with the hopes that one day she would be able to be on the other side of the screen, serving as the community’s source of news. For Maya, being a journalist is more than simply bringing you the news, it’s about giving voice to the voiceless, and sorting through a story to find the deeper meaning.

As a Mexican-American, it’s important to Maya to strive to tell the stories of a population that is underserved in mainstream media. With Omaha having a large Hispanic population, Maya found the city to be a good fit for her next work venture.

Maya enjoys traveling, especially to Mexico and anywhere with a beach. She also loves dancing – bachata, salsa, cumbias, banda – you name it! Maya is a true Coloradan and enjoys staying active. That includes one of her favorite pastimes, horseback riding and playing soccer. Some would say Maya is obsessed with her favorite NFL team, the Denver Broncos (#SB50 World Champs...#NeverForget) but she is not ashamed of that in the least bit.

Maya holds a Bachelor’s Degree in Journalism and Communications from the University of Denver and is a member of the National Association of Hispanic Journalists.

Maya enjoys getting to meet her viewers, so if you see her around town, say hi!