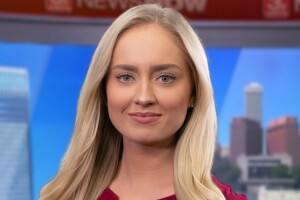 Ruta Ulcinaite joined the KMTV 3 News Now team in June of 2019. Elated to be in Omaha, she loves the city, the people and all the great food.

Ruta graduated Michigan State University in May of 2019 with a major in broadcast journalism and political science. In her time at Michigan State she worked for the student newscast, Focal Point News, as an assignment editor, producer and then reporter and anchor. She has had the opportunity to intern at HOMTV in Okemos, Michigan, NBC affiliate WDIV in Detroit, Michigan and The State News in East Lansing, Michigan.

Her experience has propelled her into an enriching career as a full time reporter. With her focus being in politics, she has already helped cover important stories at KMTV on illegal immigration and the 2020 Presidential Race.

Ruta loves storytelling and meeting new people. She thinks everyone has a story to tell and thinks Omaha is the perfect place for a young, eager reporter.

Ruta moved to the United States when she was a little girl. Born in Siauliai, Lithuania, Ruta loves to travel back to her home country and visit new ones as often as she can.