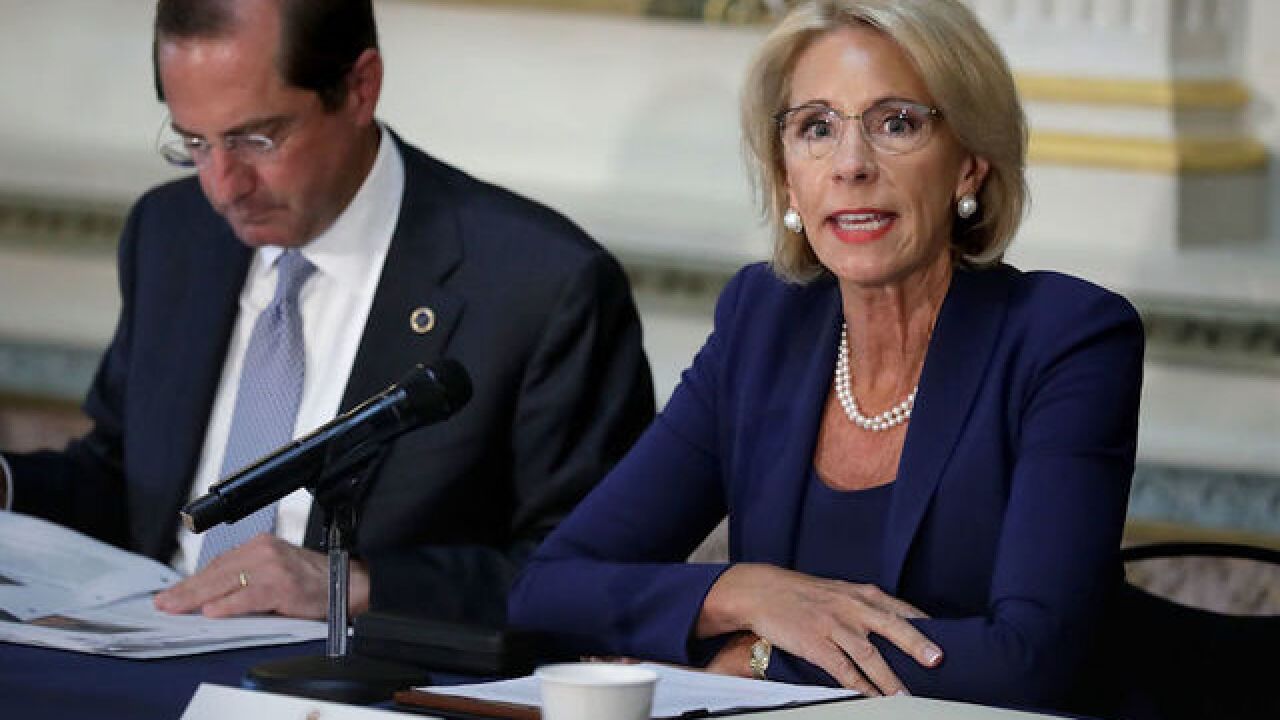 Image copyright 2018 Getty Images. All rights reserved. This material may not be published, broadcast, rewritten, or redistributed.
Chip Somodevilla
<p>U.S. Health and Human Services Secretary Alex Azar (L) and Education Secretary Betsy DeVos participate in a meeting of the Federal Commission on School Safety in the Indian Treaty Room in the Eisenhower Executive Office Building August 16, 2018 in Washington, DC. </p>

The Trump administration is pushing back on a New York Times report that Education Secretary Betsy DeVos is looking into a plan that would allow states to use federal funding to buy firearms for teachers.

On Wednesday, the Times reported that the Education Department was considering using a grant program called the Student Support and Academic Enrichment Program as a way to give federal funding for firearm purchases to states or school districts. The report cited multiple people with knowledge of the plan.

A senior administration official told CNN that the idea laid out in the Times report did not originate with the Department of Education or DeVos. That official said the department received a letter from the Texas state Department of Education asking if the funds from a federal grant program could be used to purchase firearms. It was circulated to departmental lawyers and researchers for guidance, according to the official. The department ultimately chose not to respond, the official said.

The official added that DeVos thinks that Congress should take action to clarify whether or not using the grant funding to buy guns is permissible. Moreover, the Education Department believes the grant program is intentionally vague to give school districts flexibility, and the idea of purchasing firearms was likely not considered when it was written, according to the official.

In response to the Times report, Education Department spokeswoman Liz Hill told CNN that "the department is constantly considering and evaluating policy issues, particularly issues related to school safety. The secretary nor the department issues opinions on hypothetical scenarios."

The discussion around arming teachers has been a deeply controversial one. President Donald Trump floated the proposal to arm educators and school staff on multiple occasions in the wake of the deadly school shooting at Marjory Stoneman Douglas High School in Parkland, Florida in February 2018.

"If you had a teacher who was adept with the firearm, they could end the attack very quickly," Trump said during a listening session on school safety a week after the shooting.

The idea of arming school staff has been met with sharp condemnation.

Former Congresswoman Gabrielle Giffords said in a statement Wednesday that "arming teachers is not a solution."

"It recklessly puts American children in even more danger," she said in response to the Times report. "It's time for Americans to find the courage to take on the powerful and fight for our own safety."

The American Federation of Teachers and the National Education Association also lambasted the proposal. Nicole Hockley, whose six-year-old son was killed in the 2012 Sandy Hook Elementary School shooting, took the microphone and told Trump she would rather arm teachers with ways to prevent shootings in the first place rather than with a firearm.

Despite the criticism, Trump doubled down on the proposal on several subsequent occasions, and in March, the Trump administration proposed providing some school personnel with "rigorous" firearms training.

In the wake of the Parkland shooting, the Trump administration also created a federal school safety commission, which is chaired by DeVos. In June, she testified before a congressional committee that the commission would not focus on looking at the role the role of guns in school safety. That stance was panned during a public forum . Democrats on the House Committee on Education and the Workforce have called on DeVos to explain how the commission will explore the role of guns.

"The Commission was charged with recommending policies and funding proposals to prevent school violence," 17 members of the committee wrote in a letter in June . "A core element of combating school violence is addressing gun violence, both in school and in our communities."