Could America abolish the Electoral College? 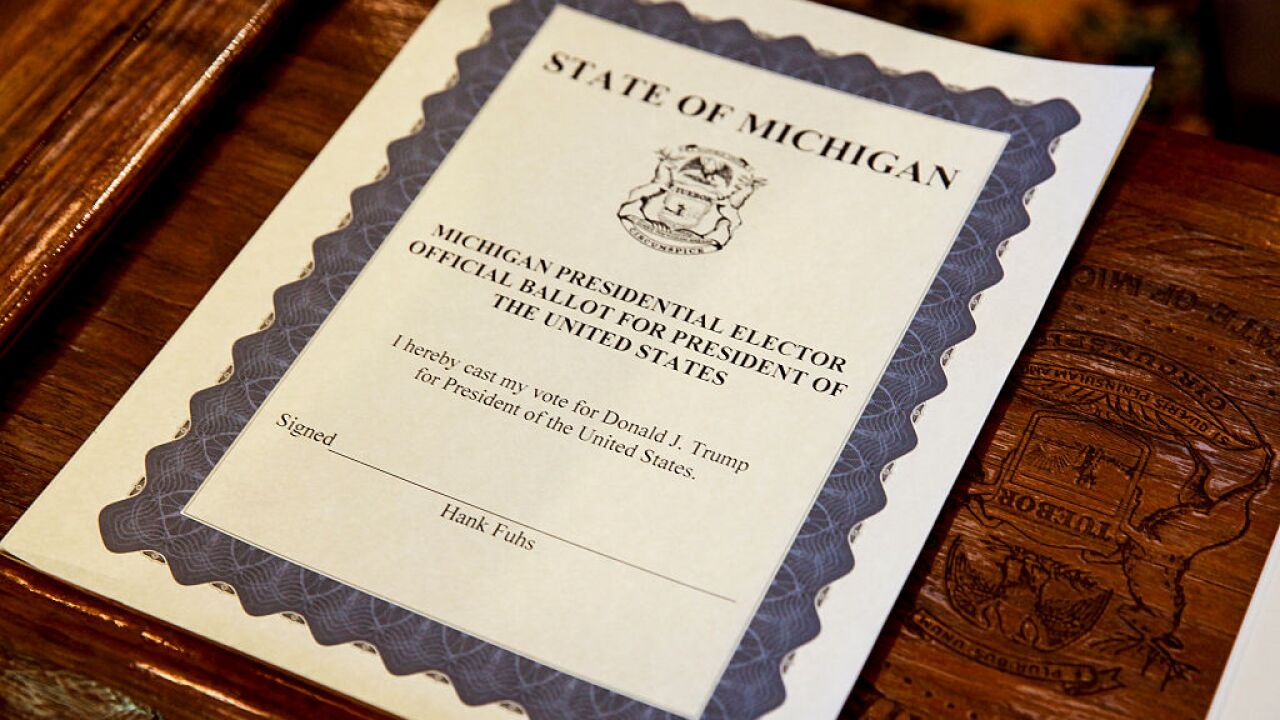 The Electoral College is certainly the weirdest part of American democracy; a confusing system with a troubled history and an ugly past.

Here are some questions you might have wanted to ask:

1. Why are people talking about the Electoral College right now? A Democrat running for President, Sen. Elizabeth Warren of Massachusetts, said at a recent CNN town hall should be abolished.

"Well, my view is that every vote matters," Warren said. "And the way we can make that happen is that we can have national voting. And that means get rid of the Electoral College and everybody counts."

Plus, 11 states and the District of Columbia have joined something called the National Popular Vote Interstate Compact , whereby states would simply agree to pledge their electoral votes to the national popular vote winner. Colorado became the 12th state to join that effort last week and Delaware and New Mexico may be next.

2. Why do Democrats in particular want to get rid of the Electoral College? The simplest explanation for this is that Democrats have gotten more votes but lost the White House twice in the last 20 years (2000 and 2016), whereas Republicans have twice gotten fewer votes and won.

The Wall Street Journal reported that shortly after taking office, Trump mused about pursuing an end to the Electoral College, but Senate Majority Leader Mitch McConnell steered him away from the idea, according to the paper, citing the difficulty of a nationwide recount.

4. Didn't Trump say he solidly won the election in 2016? Trump's Electoral College victory was just as decisive as Clinton's popular vote margin -- 306-232, well north of the 270 needed to win. The only single Trump state Clinton could have won to change the outcome was Texas .

5. Slow down. What exactly is the Electoral College? American voters actually don't select the President directly. They vote instead for 538 electors who, according to the Constitution, meet in their respective states and vote for president and vice president. These people, the electors, comprise the Electoral College. Their votes are then counted by the president of the Senate in a joint session of Congress.

6. Why did the framers choose this system? There are a few reasons: First, they feared factions and worried that voters wouldn't make informed decisions . They didn't want to tell states how to conduct their elections. There were also many who feared that the states with the largest voting populations would essentially end up choosing the President. Others preferred the idea of Congress choosing the President , and there were proposals at the time for a national popular vote. The Electoral College was a compromise .

7. Why is the history of the Electoral College so fraught? The stain of slavery is on the Electoral College as it is on all US history; the formula for apportioning congressmen, which is directly tied to the number of electors, relied at that time on the 3/5 Compromise , whereby each slave in a state counted as fraction of a person to apportion congressional seats. This gave states in the South with many slaves more power despite the fact that large portions of their populations could not vote and were not free.

8. Why are there exactly 538 electors? There's an elector for every member of the House of Representatives (435) and Senate (100). Plus an additional three for people who live in the District of Colombia. It takes 270 electoral votes to get a majority of the Electoral College.

9. How are the 538 electoral votes assigned? Each state gets at least 3 electors. California, the most populous state, has 53 congressmen and two senators, so they get 55 electoral votes.

Texas, the largest reliably Republican-leaning state, has 36 congressmen and two senators, so they get 38 electoral votes.

Seven states -- Alaska, Delaware, Montana, North Dakota, Vermont and Wyoming, along with DC -- are so small, population-wise, that they only have one congressperson apiece, and the lowest possible three electoral votes. Other Americans, such as those from Puerto Rico, get no electoral votes, although they can take part in presidential primaries. Puerto Ricans can vote for president if they leave Puerto Rico to live in a state.

The states are in charge of selecting their own electors. And a number of states do not require their electors to honor the election results, which has led, occasionally, to the phenomenon known as a " faithless elector ."

11. That seems extremely complicated. Would a popular vote system be simpler? It certainly would be simpler to understand. However, as proponents of the Electoral College point out, if you thought that recount in Florida in 2000 was nasty, imagine a nationwide recount of more than 130 million votes. THAT would be messy. And it could happen. Some states have automatic recounts for elections that are separated by less than .1% In 2016, with 136 million voters, that would have been a margin of around 136,000 votes. You can imagine a recount in the razor-thin election of 1960 , which featured a less-than .2% difference in vote totals , but a solid Electoral College victory for John F. Kennedy.

13. Do the number of electoral votes ever change? Yes and no. The total number of electors -- 538 -- cannot change unless there are more lawmakers added on Capitol Hill or a constitutional amendment. But the number of electors allocated to each state can change every 10 years, after the constitutionally-mandated Census. The number of congressmen is reapportioned -- that's the technical term -- according to changes in the population. Some states gain a House seat or two and others lose some. No state, no matter how small, can have zero members of Congress.

14. When is the next census? It's in 2020. The reapportionment coming in 2020 has a lot to do with the current political debate over whether the US Census should ask if someone is a citizen . Some fear that asking it could make an accurate population count more difficult, or that states with many immigrants could end up with fewer lawmakers in elections starting in 2022.

15. How could the Electoral College be changed? It's in the Constitution and changing the Constitution is very difficult. It takes years to accomplish and requires broad majorities in Congress or state legislatures. States that currently benefit from the Electoral College would have to give up some of that power. The other possibility is something like the aforementioned agreement by states to honor the national popular vote winner. But you can bet if that proposal takes hold, there will be lawsuits.

16. So the Electoral College has never changed? It's actually changed three times, each by constitutional amendment. The 12th Amendment , passed after the tie election of 1800 ( read about it! ) made it so that electors voted for president and vice president instead of voting for two people who could be president. The 20th Amendment put a time limit on the process. The 23rd Amendment gave electors to the District of Columbia.

18. Who supports the Electoral College system and what's their argument? Plenty of people! One of the most important supporters is McConnell, who has spoken out against things like the National Popular Vote Interstate Compact. McConnell is the powerful legislator who has used a majority built on an increasingly rural electorate to create a more conservative court and is expected to proposals for gun control and climate change legislation.

He's weighed in against the idea of a national popular vote effort on the Senate floor.

"It would diminish the influence of smaller states and rural areas of the country; lead to more recounts, contentious fights over provisional ballots, and conflicts over the results of presidential elections; and encourage voter fraud. It could also radicalize American politics and lead to presidents who are elected with very small pluralities, or who failed to qualify for the ballot in all 50 states and the District of Columbia."

"Actually what would happen if they do what they say they're gonna do is white people will not have anything to say," LePage said, according to reports. "It's only going to be the minorities that would elect. It would be California, Texas, Florida. All the small states like Maine, New Hampshire, Vermont, Wyoming, Montana, Rhode Island, you'll never see a presidential candidate again. You'll never see anybody at the national stage come to our state," he said. "We're gonna be forgotten people. It's an insane, insane process."

20. What do most Americans say? Sixty-five percent of Americans supported selecting the President by popular vote, compared to 32% who preferred the Electoral College in a June 2018 PRRI/Atlantic survey. There's less support if the wording includes changing the Constitution. A Pew survey in March of 2018 asked if Americans supported amending the Constitution to select the President by popular vote and a smaller 55%, still a popular majority, endorsed the idea.