'Where is Stephon's justice?' Tension remains after more than 80 arrested in Sacramento protest 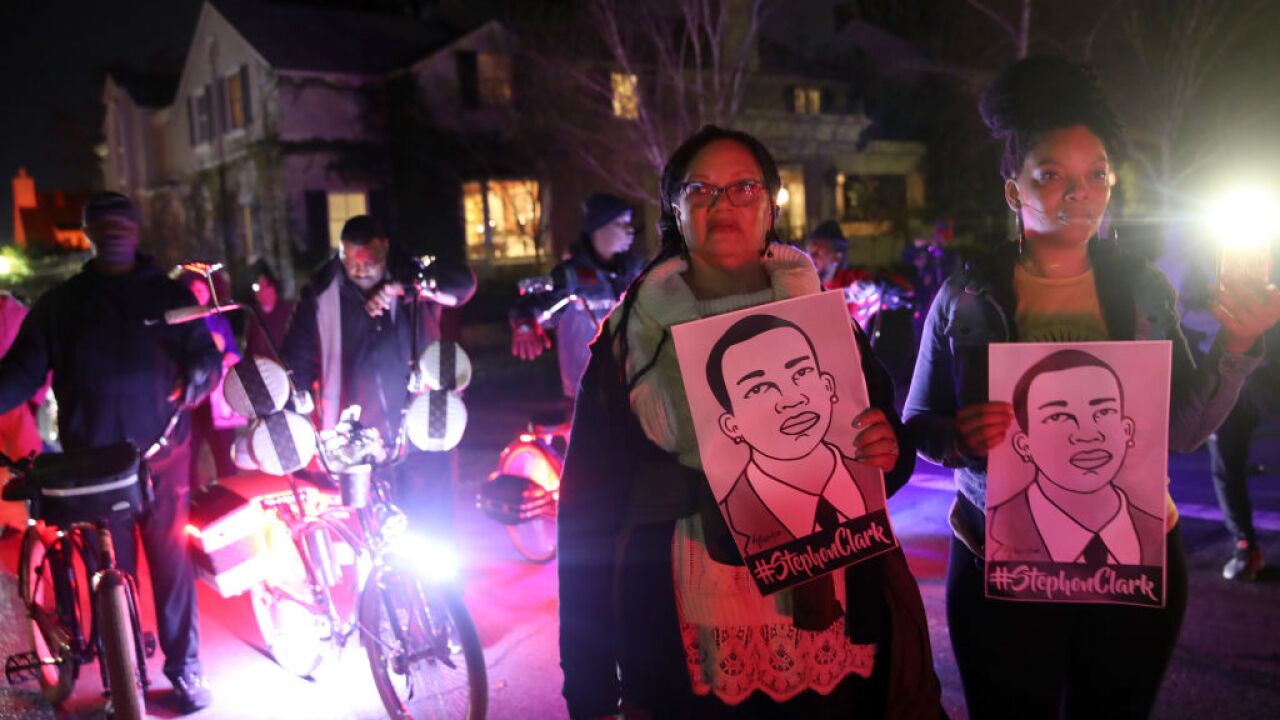 Dozens of protesters bearing bearing photos of Stephon Clark and Black Lives Matter signs were arrested Monday night in a show of disobedience against the decision to not file charges against the police officers who killed Clark.

Sacramento Police Capt. Norm Leong, who live-tweeted the protest, said the arrests were for unlawful assembly. He also said that five cars had been keyed during the demonstration.

Videos from the scene show a large group of police, including several mounted officers.

Sacramento Bee reporter Dale Kasler was also detained while covering the protest and was released after being held for about an hour, the paper reported .

The protest comes in the wake of prosecutors' decision on Saturday not to criminally charge two officers who fatally shot Clark last year in his grandmother's backyard.

Clark, who was unarmed, was shot seven times last March, including three times in the back, according to an autopsy released by the Sacramento County Coroner's Office. An independent autopsy found that Clark was shot eight times, with six of those wounds in his back, according to a forensic pathologist retained by Clark's family.

Authorities have said the two Sacramento officers who shot Clark on March 18 were responding to a report that a man had broken car windows and was hiding in a backyard. Police chased that man -- later identified as Clark -- who hopped a fence into his grandmother's property.

Police said they fired at Clark because they believed he was pointing a gun at them, but only a cellphone was found at the scene.

The killing sparked days of protests from activists who called for police accountability, part of the broader movement known as Black Lives Matter.

Decision not to charge

But on Saturday, Sacramento County District Attorney Anne Marie Schubert said that their investigation had to decide if officers broke the law.

"When we look at the facts and the law, and we follow our ethical responsibilities, the answer ... is no," Schubert told reporters, hours after meeting with the family.

In the news conference, Schubert described Clark as a 22-year-old man going through a tumultuous time in his life, worried about jail time after being accused of assaulting the mother of his children days earlier.

He also had drugs in his system on the night he was shot and had searched the web on his phone for information about how a person can take his own life.

Clark's mother, SeQuette, told reporters outside a family member's home in Sacramento that she was outraged by the decision not to charge the officers.

Jamilia Land, a friend of Clark's family and a member of CA Families United for Justice, said in a statement that no prosecutor's "ruling can change the most important fact -- Stephon should be alive."

"Stephon was unarmed and in no way a threat. Instead, they shot 20 times and hit Stephon at least eight times. Even then, they did not call for medical care even though he was bleeding profusely. Now the Sacramento district attorney says it's unjust to charge these officers with Stephon's murder. Where is Stephon's justice?"