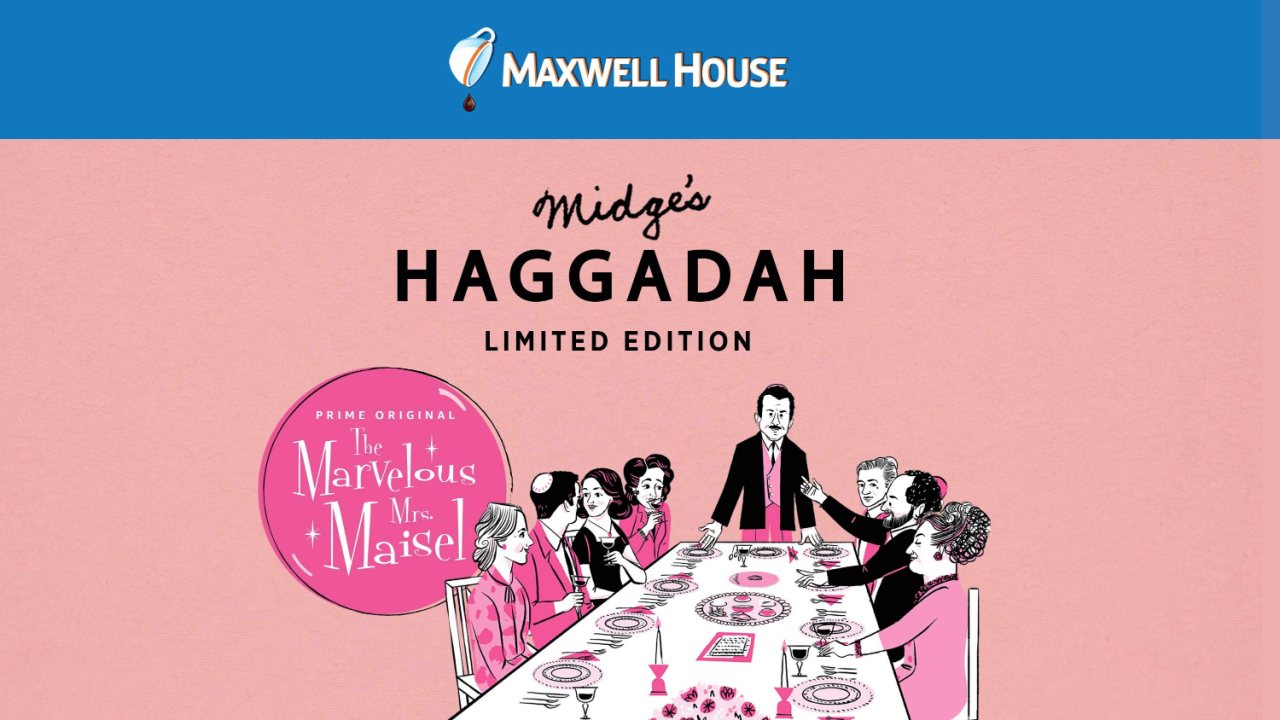 Maxwell House is partnering with Amazon to give its iconic Passover Haggadah a "Marvelous Mrs. Maisel"-themed lift.

The coffee company has given out Haggadah booklets, which contain the Jewish text used to guide the first Passover meal, since 1932. The longstanding promotion has set Maxwell House apart from other coffee makers over the years. But this new television tie-in could help the brand stay relevant in a crowded market.

"The Marvelous Mrs. Maisel" debuted on Amazon in 2017. The Emmy-winning show tells the story of aspiring comedian Midge Maisel, a brassy New Yorker who grew up in a traditionally Jewish home. It's easy to believe that the Maisel household would have had a Maxwell Haggadah tucked away on a kitchen shelf.

Naor Danieli, brand manager for Maxwell House, described the "Mrs. Maisel" Haggadah as a "premium limited edition." Maxwell House is planning to distribute between 40,000 and 50,000 copies of the special Haggadah to customers who purchase Maxwell House products on Amazon.

"What we did was take our Maxwell's Haggadah from the '50s, that Midge would have used, and layered over it with incredible illustrations, Midge's brisket recipe, complete with smudges and wine stains," Danieli said. "Midge's" pink booklet has a well-worn, retro aesthetic. The Maisel tie-in can make the Haggadah more "approachable," he said.

Maxwell House has long appealed to a Jewish customer-base. In 1923, Maxwell House secured the first Kosher for Passover certification for coffee, and it has printed more than 50 million copies of the Haggadah over the years. Danieli described the Maxwell Haggadah as a "staple of Passover." Many American Jews likely recognize the classic blue version of the pamphlet.

Maxwell House, which is owned by Kraft Heinz, is promoting the offer on social media and across Amazon's platforms.

Maxwell has partnered with other brands on its Haggadah, though not in this way. This year and last year, the coffee brand teamed up with Manischewitz, which makes kosher wine and Passover matzos, on a giveaway.

Maxwell House is also giving away more than 500,000 copies of its traditional Haggadah, which was last updated in 2011. Customers can obtain it by buying Maxwell House products at retail locations.