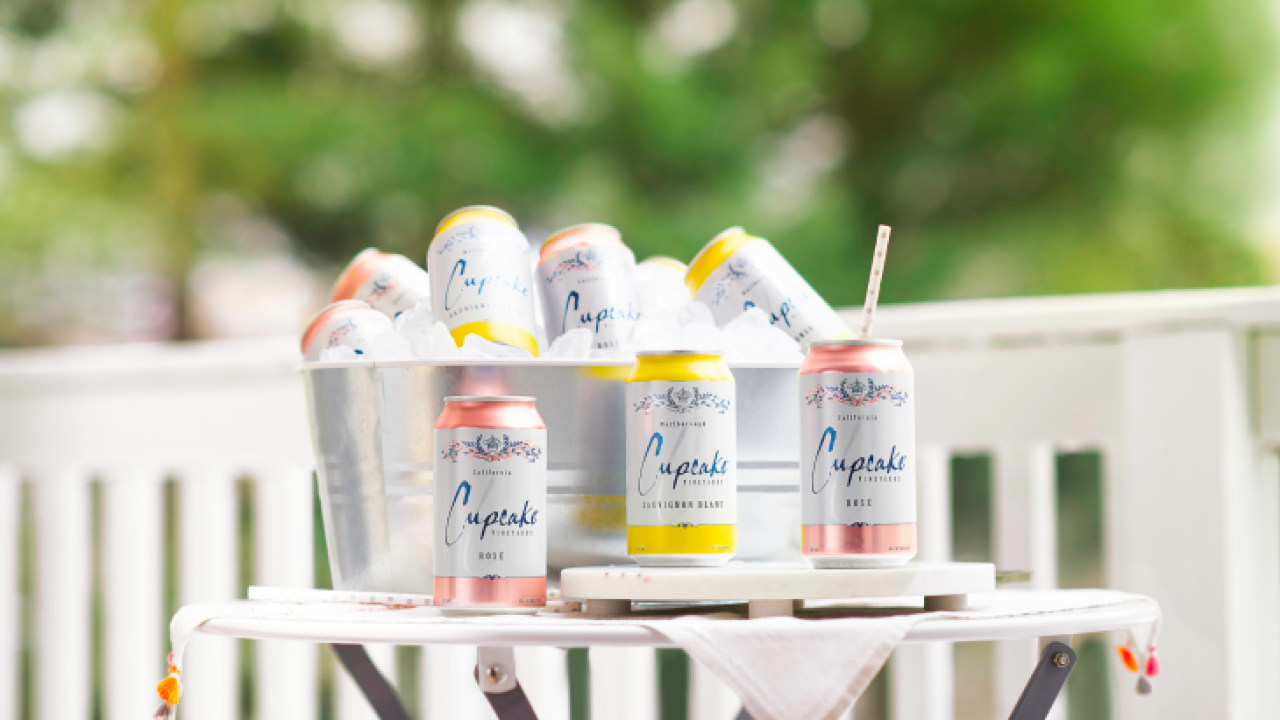 If all your favorite summer adventures include wine but you’re tired of lugging around an entire bottle everywhere you go (speaking from experience here…), we have some seriously fabulous news.

Cupcake Vineyards is now putting its Rosé and Sauvignon Blanc in 375ml (12 ounce) cans — which, yes, is the equivalent of half a bottle. That means all you’ll need is two cans, and you’ve got yourself an entire bottle that will definitely fit more neatly in your purse or beach bag.

The wine is now available nationwide for a suggested retail price of $5.99 per can, or $12 a bottle if you’re counting it that way. It’ll be at the Coachella Valley Music and Arts Festival in a couple of weeks, so we’re sure we’ll see all the movers and shakers drinking it soon.

“We are honored to be the first-ever beverage in a can available at the festival in Coachella history,” said Eben Gillette, Vice President of Marketing for Cupcake Vineyards. “Our cans are the perfect portable, shareable, and unbreakable solution to enjoying delicious wine outdoors, so there’s no better place than Coachella to show festival-goers a new way to enjoy Cupcake wine.”

Cupcake’s website says its Sauvignon Blanc comes from vineyards in the South Island of New Zealand and tastes of Meyer lemon, white nectarine and key lime, offering subtle hints of grapefruit, gooseberry and citrus. The Rosé originates in California vineyards and includes flavors of watermelon, strawberry and white nectarine.

THIS ARTICLE FIRST PUBLISHED ON SIMPLEMOST.COM

Cupcake Vineyards is not the first winemaker to go from bottle to can . Dark Horse Wine introduced cans last June for its Rosé and Pinot Grigio selections. You can also find the California company’s Pinot Noir, Rosé Bubbles and Brut Bubbles now in cans, each sized to hold half a bottle inside as well. Dark Horse’s canned wine is available at retailers nationwide.

There is also another brand new canned wine on the block. Called 14 Hands , it is part of Ste. Michelle Wine Estates. Aimed at outdoor lovers, adventure seekers and anyone who want to soak up some sunshine this summer, every 12-ounce 14 Hands can reportedly equals 2.5 glasses of wine (yep, that means about half a bottle).

If you love the thought of bringing a summery canned drink along on your adventures but don’t like wine, Natural Light has also released a strawberry lemonade beer for the summer that might be more to your liking!

“We designed Naturdays with all-day refreshment in mind,” Daniel Blake, senior director of value brands at Anheuser-Busch, said in a press release . “We’re excited to introduce a light beer to the market with a refreshing strawberry-lemonade flavor that will get people to rethink their drink of choice.”

And there’s even a canned option for the cider lovers out there. Crispin Cider Co. recently unveiled two new flavors in picnic-ready cans, the Pearsecco and the Crispin Brut. According to Crispin, the Pearsecco is a “marriage of a pear-based cider and a bubbly prosecco flavor.”

Meanwhile, the Crispin Brut is a crisp, extra-dry cider that tastes similar to brut champagne. You can buy both in a variety pack, which consists of four cans of each new flavor, along with four cans of Crispin Rosé, the company’s fan favorite beverage crafted with rose petals and hibiscus.

“The release of Crispin Rosé was our first venture into wine-inspired ciders at the forefront of the rosé trend last year,” Danielle Rappoport, director of Ciders, Mexican Imports and Flavored Malt Beverages, said in a press release . “Both prosecco and pear-inspired beverages have seen strong growth in recent years. With the new Pearsecco flavor, we are continuing to appeal to cider and wine drinkers alike with yet another rendition of our fresh and modern take on cider.”

If you love the Pearsecco flavor the best, you can also buy six-packs of those, starting in April.