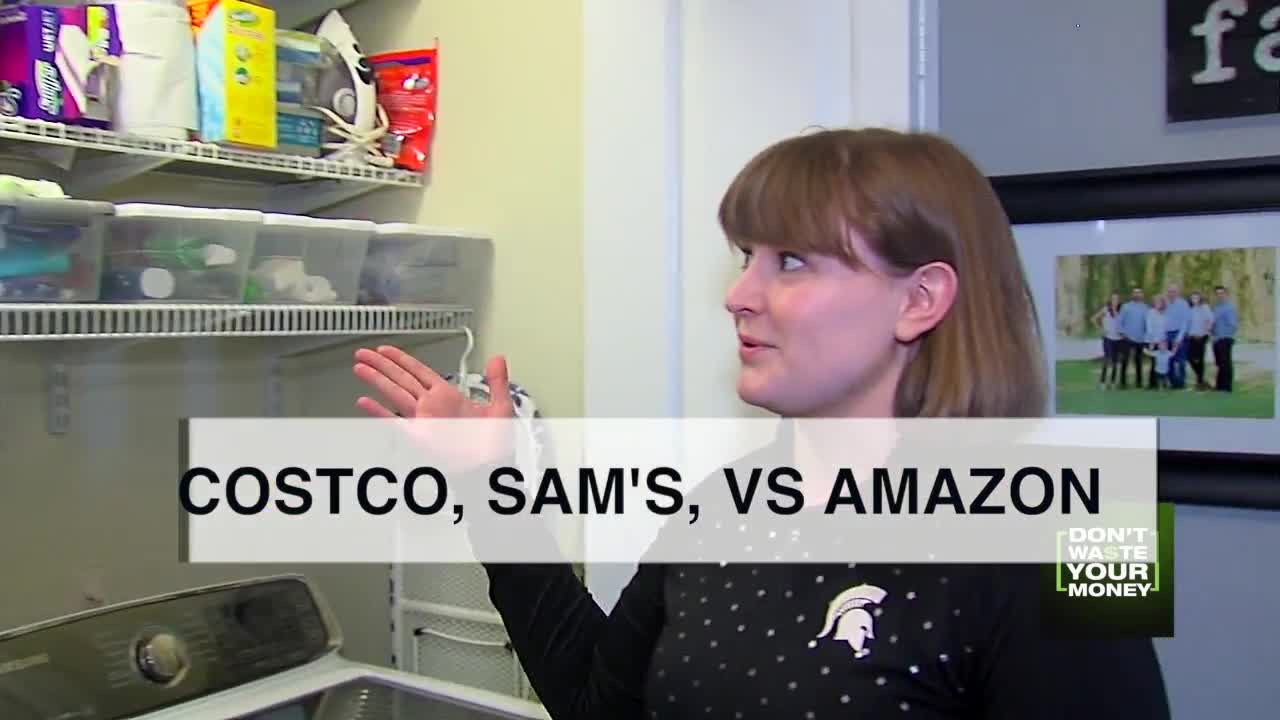 Can Costco and Sam's Club still compete with Amazon Prime? We have the results of some recent price surveys.

Can Costco and Sam's Club stay relevant in 2019?

More importantly, are they still worth the annual membership fee?

That's what a lot of shoppers are wondering these days, now that Amazon Prime can have almost any household product at your doorstep in two days.

Amazon makes ordering easy with its Amazon Dash button. Out of paper towels or Tide detergent? Just push your Dash Button, and a refill is on the way. Its Subscribe and Save program gives Prime members up to 15% off on products you order regularly, such as diapers.

So why would anyone still join Sam's or Costco?

Simple: One woman says it's because they offer services you still can't get through Amazon. Plus she says, price isn't everything.

Elisa Wright threw open the doors to her laundry room on a recent Thursday afternoon.

"This is our Costco closet," she said. Inside the laundry room were shelves filled with dozens of Costco products from a recent haul, many of them its Kirkland house brand.

"Kirkland brand is one of the best brands out there," she said. "A lot goes into that name."

"I have paper towels, fabric softener, Kleenex, laundry detergent, and more, all right here for when I run out," Wright said.

But what really sells Costco for Wright is the food.

"Oh my gosh I love all of their food. The rotisserie chickens are amazing when you don’t want to cook dinner that night," she said.

Heather Wolf agrees. This busy mom has both a Costco membership and an Amazon Prime membership. And while she prefers Amazon for convenience she loves being able to grab whatever she wants on the way home from work.

"You run out of toilet paper, do you have 24 hours to wait for Amazon to deliver it?" she asked.

Wolfe said one downside of Costco and Sam's are the larger sizes of many items. She said their salad bags, for instance, are too large for her small family.

But she said she purchases things with long shelf life, such as olive oil, which she said is a great value.

Not to be left out of this battle are grocery chains like Kroger.

California-based Gina Zakaria, founder of the money-saving blog "The Frugal Convert," told us that when it comes to smaller packages, local supermarkets often top Costco, Sam's and even Amazon.

"A lot of time you can find things like diapers that are a much better deal at grocery stores," she said. "Snack items, like the prepackaged foods of kids lunches, those tend to be better at grocery stores."

But she says in a recent article that warehouse stores have a real price advantage when it comes to bulk items like rice, detergent and paper products, which, she said, are almost always cheaper.

Meantime, Costco, and especially Sam's, are upping the number of services they offer to keep shoppers coming back despite Amazon's lure.

You can stop by for prescription drugs, hearing aids, eyeglasses, and even have tires put on your car while you are waiting.

Consumer Reports Magazine said Sam’s Club and Costco's prices on those services are lower than most other chains. Their pharmacies have come in tops in several recent surveys by the magazine.

So which is best?

If you are deciding between Sam's, Costco, and Amazon Prime, where you live may make the decision for you.

And if a club is more than 20 minutes away, Amazon Prime may be your best option, as you may rarely use that membership.

UPDATE: Her newer April 2019 comparison of 40 items found similar results, with Costco having the lowest price on many items.

So while online shopping is the future, with Dash buttons, subscriptions, and maybe drone delivery in a few years, right now there are still plenty of good reasons to join a warehouse club.

"There are just certain things Prime is not going to do for you," she said. "Prime won’t deliver my rotisseries chicken if I am picking it up on the way home from work."

No it won't, at least not until it figures out how to fly you a hot chicken via drone.

As always, don't waste your money.