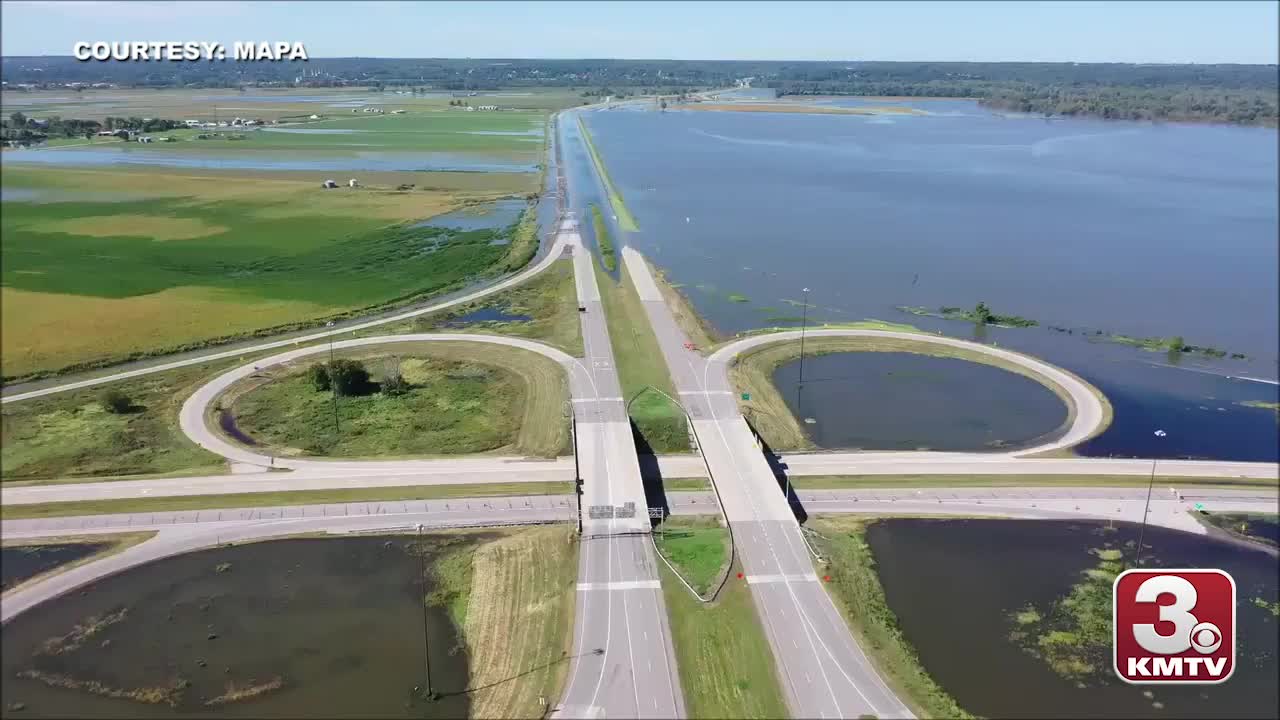 MAPA shared this drone footage of flooding along the interstate system near Crescent, Iowa.

CRESCENT, Iowa (KMTV) — Parts of I-29 and I-680 still remain closed near Crescent, Iowa. Today, the Metro Area Planning Agency shared drone footage of the flooded roadways in the area.

The Nebraska Department of Transportation sent out this release regarding the flooding:

September 23, 2019 (Lincoln, Neb.) — I-680 from the Missouri River to the I-29 interchange
near Crescent, Iowa, and US-159 at the Missouri State Line, east of Rulo, are closed due to
water over the road, according to the Nebraska Department of Transportation. The closures will
remain in place until water levels recede to safer levels.

I-680 has been closed since Friday and the duration of the closure is unknown at this time,
according to District 2 Engineer Tim Weander.

“This is dependent on the Missouri River flows and elevations, and whether any damage occurs
on the flooded Iowa Department of Transportation routes, said Weander. “We advise motorists
to drive with caution on highways from Blair to Omaha due to possible increased traffic, including US-30,
US-75, and N-133, and in Omaha US-75, I-680, I-480 and I-80.”

US-159 east of Rulo is closed on the Nebraska side at the Missouri River Bridge at Rulo.
According to Jenna Keyes, Communication Specialist, Missouri Department of Transportation,
six feet of water was reported over MO-111 at Big Lake, Missouri, and was starting to rise over
US-159. She added that there is no potential reopening date.

Motorists are advised to use caution when traveling in flood affected areas. If you come across barricades, never drive around them. Turn Around! Don’t Drown! Plan your travel by checking 511 prior to leaving for your destination. 511 provides the most up-to-date travel conditions and closures available. The system is available at all times online at www.511.nebraska.gov [511.nebraska.gov],
Nebraska 511’s smartphone app or by dialing 511 in Nebraska.