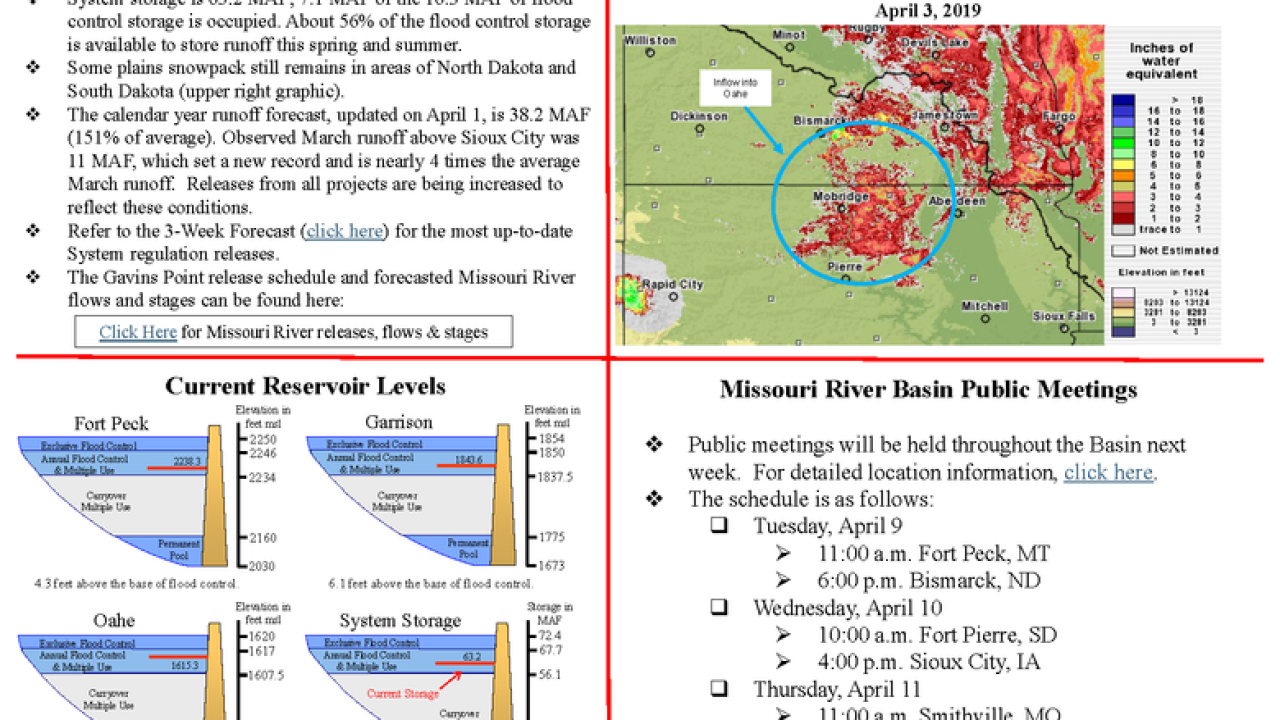 The Corps says their runoff forecast was off by quite a bit due to the higher-than-average water levels. In fact, they say it was more than 151 percent more than normal.

The record high runoff in March was caused by 2-4 inches of rain falling on heavy plains snowpack causing the snowpack to rapidly melt on frozen, saturated soils. Pool levels in the four System projects that have significant flood control storage – Fort Peck, Garrison, Oahe and Fort Randall – have all increased significantly to capture much of the runoff. The Corps plans to increase Gavins Point releases to 55,000 cubic feet per second by early next week. Gavins Point releases will be above average for the next several months, and possibly as late as November.

“We need to reduce pool levels in Oahe and Fort Randall over the next several weeks so that those reservoirs are in position to reduce flood risk during the spring and summer. The Fort Peck and Garrison reservoirs are well positioned to receive the runoff from the mountain snowmelt, which typically begins in May,” added Remus.

Much of the plains snowpack in central North Dakota and eastern South Dakota has melted. The heaviest snowpack remains in isolated areas of north central South Dakota and south central North Dakota where the snowpack’s liquid content, or snow water equivalency (SWE), ranges from 1 to 5 inches. Frost depth is still deep in much of the upper basin, including the areas with the remaining snowpack. The Corps is cooperating with other agencies to acquire plains snow measurements in the upper basin.

Based on the March 15 System storage check, flow support for the first half of the navigation season is full service. However, due to above average runoff into Oahe and Fort Randall reservoirs, releases from Gavins Point have been above full service levels to lessen the time that those projects have water stored in their exclusive flood control zones. Flow support for the second half of the navigation season, as well as navigation season length, will be based on the actual July 1 System storage. Flow support is generally sufficient to provide a 9-foot-deep by 300-foot-wide channel.

Weekly updates on basin conditions, reservoir levels and other topics of interest can be viewed here: http://www.nwd-mr.usace.army.mil/rcc/reports/pdfs/weeklyupdate.pdf.

The Corps will host six public meetings April 9-11 to discuss the Missouri River Mainstem System, its runoff and reservoir operations. Meeting information is detailed in a separate news release: https://go.usa.gov/xmqSp.

Due to the spring public meetings that will be held April 9-11, the fourth monthly conference call of the 2019 runoff season will be held May 7 to inform basin stakeholders on current weather and runoff forecasts and the planned operation of the System. Presentation materials will be posted on the MRBWM website at: http://www.nwd-mr.usace.army.mil/rcc/. The call is intended for Congressional delegations; Tribes; state, county and local government officials; and the media. It will be recorded in its entirety and made available to the public on the Defense Video and Imagery Distribution System at www.dvidshub.net/unit/usace-nwd.

The forecast reservoir releases and elevations discussed above are not definitive. Additional precipitation, lack of precipitation or other circumstances could cause adjustments to the reservoir release rates.
The six mainstem power plants generated 473 million kWh of electricity in March. Typical energy generation for March is 639 million kWh. The power plants are projected to generate 11.9 billion kWh of electricity this year, compared to the long-term average of 9.4 billion kWh.

To view the detailed three-week release forecast for the mainstem dams, go to http://www.nwd-mr.usace.army.mil/rcc/reports/twregfcast.pdf.