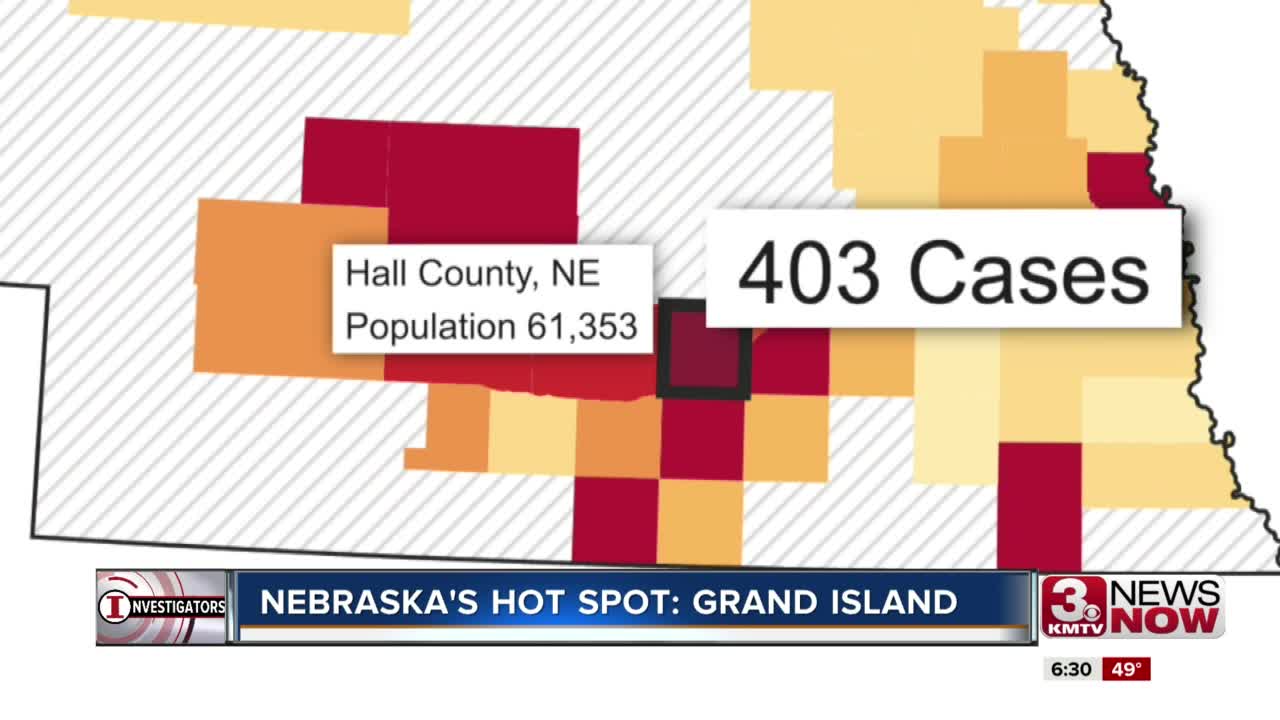 GRAND ISLAND, Neb. (KMTV) — Unlike the Omaha area, reports of new coronavirus cases in Hall County are not slowing down.

On Friday, Hall County reported 64 new COVID-19 cases. It now has 403 total. Douglas County, by far the most populous county in the state, has 273.

On Tuesday, Hall County overtook Douglas with the most reported cases.

But Douglas County's population is more than 9 times greater than Hall County. About 65 of every 10,000 people in Hall County have tested positive for COVID-19. In Omaha, it's less than five. Nearby Adams County, home to Hastings, also has a relatively high case rate per capita.

"There are a lot of factors," Anderson said. "Anytime you put a large number of people in a building and they're working very close together, then that gives the virus an opportunity to spread."

Cases could increase by 50 to 60 each day for the next week or week or two, she said.

"We're not even in the thick of it yet," Anderson said.

Hall County's 403 cases make up nearly 35% of the state's about 1,156 cases as of Friday. 3 News Now Investigators gathered data from each of the local health departments to reach a statewide count that is as accurate as possible.

Cases have been reported at the JBS meat packing plant and at least five long term care facilities in Hall County.

"The virus is...virtually everywhere in our community," said Anderson.

Grand Island's positive rate on tests is higher than the rest of the state. Anderson estimated Friday that 1,500 tests have occurred in her district. That would mean 28% of tests are returning positive, compared to 8% across the state.

Anderson said they are receiving additional testing capacity with help from the National Guard.

"We have a lot of well wishers and we're very grateful for the support we have throughout...all of Nebraska," she said. "We don't give up. We stay strong. We'll get through this, and on the other side, we'll be smarter, we'll know more about what we should be doing, and I think we'll have a much greater appreciation for those of us that are fighting the battle right now."