Live music in Omaha on hiatus during pandemic 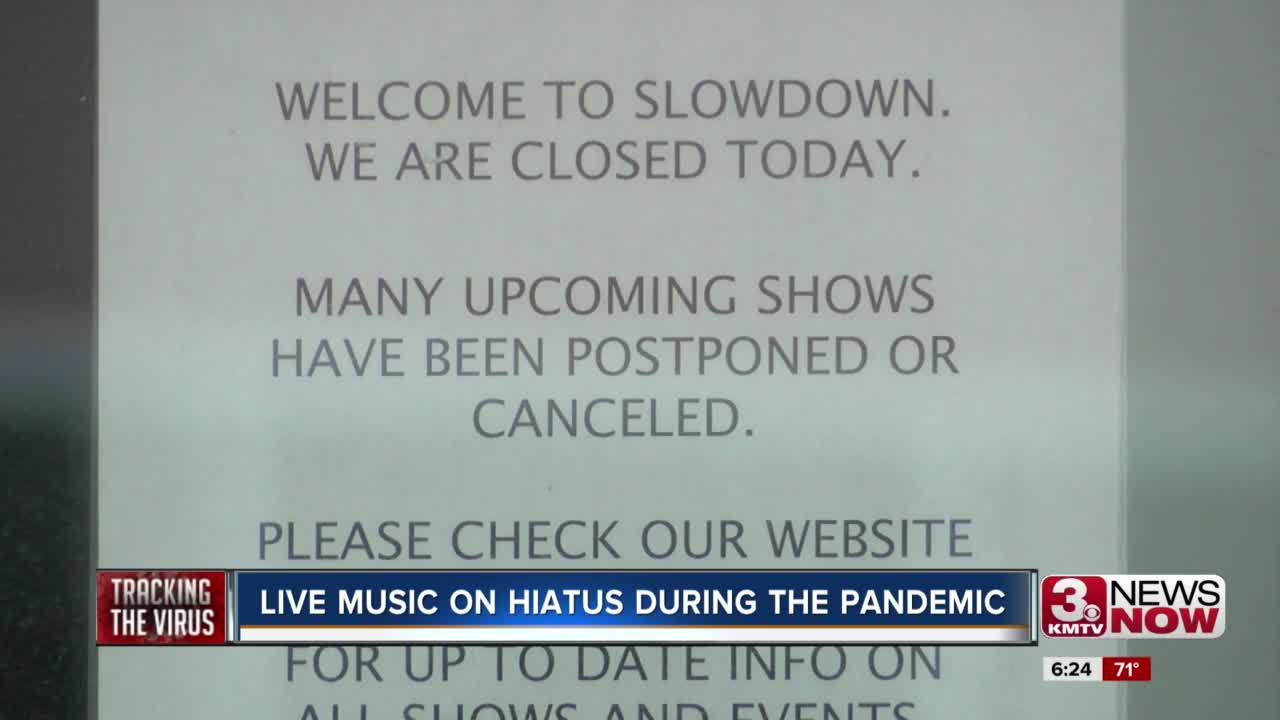 OMAHA, Neb. (KMTV) — The Slowdown was thriving. Shows went on nearly every night, many of them at capacity.

“We were kind of going into our best spring season, we maybe ever had,” says owner of the Slowdown, Jason Kulbel.

Then in mid-March, coronavirus came.

Governor Ricketts said Thursday that venues like the Slowdown can open at 25 percent capacity.

With any crowd at all, Kulbel wonders how he’d control people entering and exiting, bathroom lines and backups at the bar.

The downtown venue fits around 600 people. If 150 were allowed, he says prices would have to go up to even make it worth it.

“Do people want to pay $75 for a show and 20 dollars for a beer? No, everybody is broke right now. So that’s going to work either,” says Kulbel.

Kulbel has also worked with NIVA, a group created just a few months ago, to lobby Congress for financial support for the music venue industry.

“It’s just a perfect example of everybody banding together and helping everybody out,” says Kulbel.

One solution for now, concerts via video stream, $5 virtual admission.

“It’s not going to substitute for playing in front of a live crowd for the band or for the viewer. But I think it’ll be fun,” says Kulbel.

Every August, thousands flock to Stinson Park for Maha Festival. The festival has booked large acts like Lizzo, Weezer and Passion Pit.

But this year, they made the decision to cancel the festival in April.

“While it was a little earlier than people would have anticipated to make a call like that because people we’re starting to see the bigger picture about what was happening,” says Lauren Martin, executive director of Maha Festival.

“Had we gone forward it could have risked Maha in the future.”

Martin has seen Maha rise from a small half day festival, to multiple days of music, food and the arts.

She envisions growing it to Omaha's version of South by Southwest, which is a nationwide cultural event.

“The weighing of not being able to see that vision through versus having to take a year off, it was kind of an easy decision, at the end of the day when you were weighing what the risk was,” says Martin.

The CHI Health Center has canceled or postponed around 20 shows. MECA, the organization that runs the arena and the ballpark, will lose millions in lost revenue due to concert and sports cancellations.

Kristyna Engdahl with MECA hopes to have shows again before too long but is approaching with caution.

“We’re not necessarily in a hurry to, we want to standby to monitor what kind of developments there may be, or what kind of best practices emerge before we look into something like that,” says Engdahl.

Kulbel is also in no hurry. No bands are touring and even once they start, Kulbel isn’t sure how they can put on a show safely.

“Even if we come back with a decent size schedule in the fall, or winter, or whatever it is. It’s not going to look like that, if it’s going to be very different for awhile. Probably until this is gone,” says Kulbel.

Martin says people are craving the in-human, live music experience and hopes her festival is bigger than ever when it makes its comeback in 2021.

“Maha might have a different meaning in some ways because it might be one of the first things where people are coming together in a major way. I hope it’s not, I hope we get to come back together before that.”