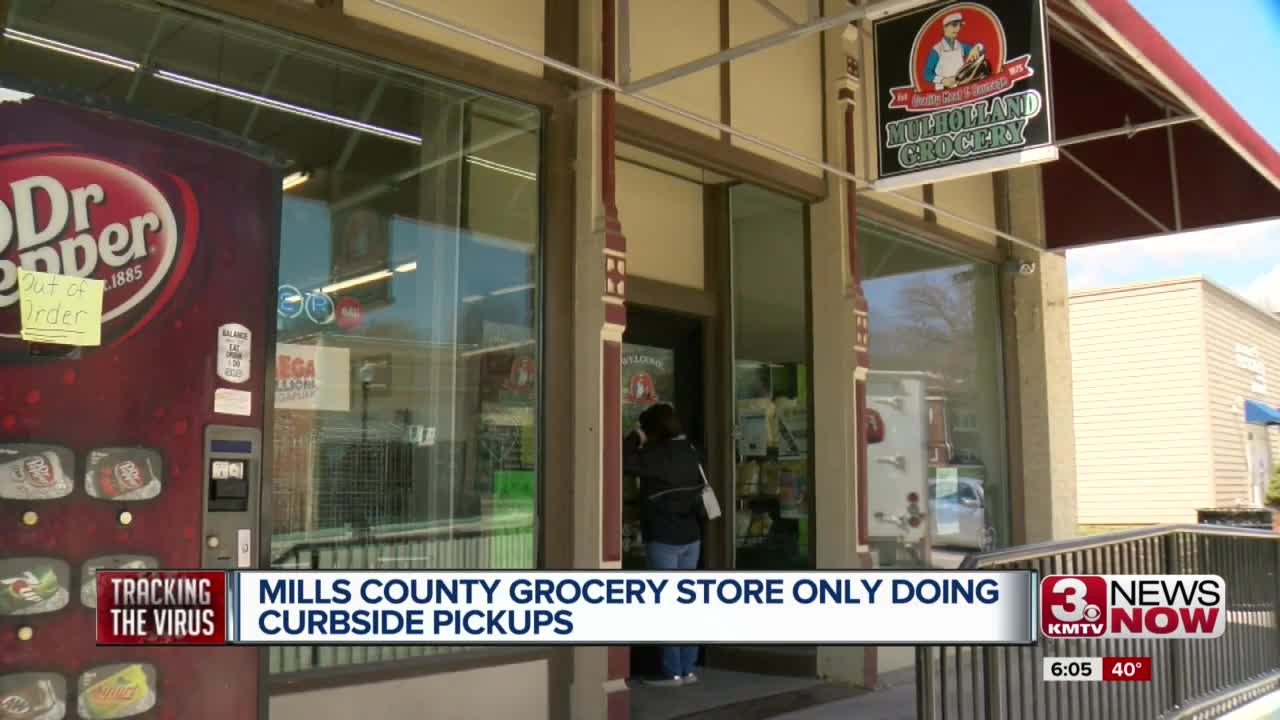 The changes the store has made and why it's being praised by one official.

MALVERN, Iowa (KMTV) — Over the weekend, a community grocery in Mills County, Iowa received praise from the state’s secretary of state for what they’re doing to mitigate the spread.

More than two weeks ago, Mulholland Grocery in Malvern decided to stop allowing customers inside and moved to curbside delivery. The store is the only grocery in the town of roughly 1,100 citizens.

“We do not have the problems they’re having on the other side of the state and we want to keep it that way,” said Tom Mulholland, the store’s owner.

The way the curbside pickup works at the store is people can call or email their order in. Staff at the store do the shopping for the customer and bag the goods before pickup. Customers either pay in advance or hand the staff cash or a credit card when they arrive. The patrons stay outside and the staff brings the groceries out to the car, while wearing protective safety gear at all times.

“They’ll call us, they’ll text us, they’ll message us or they will just come and beat on the door and say we’re here,” Mulholland said. “These people are doing it because they’re scared. They don’t want to go in the stores and they want to stay safe.”

“They’re making it easy,” said Steve Ferguson, a patron at the grocery store. “Even though I didn’t have an order placed here it is five minutes later.”

Currently the grocery is filling out between 80 to 100 orders a day and doing it at a faster pace compared to major grocery store chains in the area.

“For the most part we’ve been telling people if you give us a four-hour window, we’ll get it taken care of,” Mulholland said.

However, it hasn’t been all smooth sailing. Known for its meat selection, the store’s only been able to get frozen one-pound tubes of meat recently. As well, trucking demands have caused some shipments to run late.

“We’ve had deliveries that have been 36 hours late compared to what they normally would be,” Mulholland said. “Our truck last Tuesday didn’t come in until Wednesday morning.”

Mulholland said frozen food items that keep for a while are extremely popular for people to purchase right now. As well impulse item sales for items such as chips or candy bars are going down and people can only purchase one roll of toilet paper or paper towels.

“Each delivery brings new challenges and new things that we need to limit customers on,” Mulholland said.

The next closest grocery store 11 miles away, which is helping out business, but Mulholland said even during this pandemic, he has no plans on shutting down the store his great-grandfather opened in 1875.

“We’re doing everything we can to keep our community as safe as possible because these customers mean so much to us,” Mulholland said.