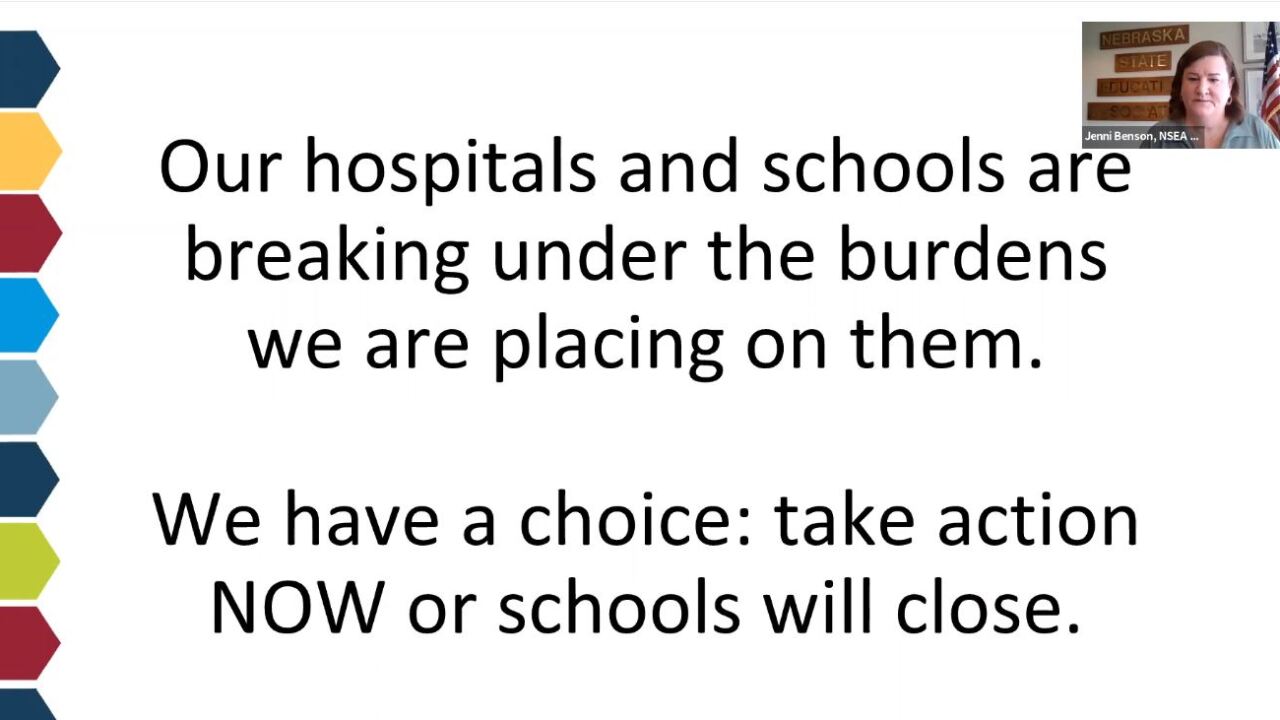 For Jon Kipper's report: 'We have a choice' NSEA calls tighter restrictions to keep schools open

The online press conference was often emotional and included a number of public health measures that the NSEA would like put in place. The union issued a dire warning.

“If the leadership in this state won’t make hard decisions and put mandates in place, our schools will close. Whether or not they stand up and say ‘schools need to remain open.’ Our schools will close. Our hospitals will continue to be over-run and more Nebraskans will die — our friends, our family. And we hold governor Ricketts, the one person in the state who could actually mandate change, we hold him 100 percent accountable for what is happening. I’ve talked to too many leaders who are afraid to do anything because of what the governor says or has behind the scenes said what he will do to them,” said Jenni Benson, NSEA President.

The union released the results of a survey sent to its membership in October. According to NSEA leaders, 6,519 responses to the survey were received. Benson called the written accounts the organization has received from teachers, “heartbreaking.”

Highlights from the survey:

The NSEA leadership said that schools will close if there is not action taken state-wide.

“When the governor had dinner outside with his friends, said he followed all the protocols, did everything right and yet he quarantined. He’s still quarantined, for fourteen days. If he was a teacher and he had been exposed, he would have been back in school. So, what are we saying, that the teachers are more essential than our governor is or are our teachers just expendable?” said Benson.

A testimonial was read from Paul Timm, a science teacher from Lyons-Decatur who was recently name the 2021 Nebraska Teacher of the Year. He and his family contracted COVID-19.

“I'm improved, but I’m still not well. I worked 6.5 class periods and I came home exhausted with a massive headache. At the beginning of the school year, I had regularly been running three to four miles four times a week. I didn’t go into this thing out of shape, but right now I feel the least physically able that I’ve been in my life. It’s not a good feeling,” Timm wrote.

Benson said that Timm is not fully recovered “but he’s back teaching every day. Every day.”

The NSEA is requesting:

“We value, we appreciate, we work for local control across the state, but if that local control is jeopardizing the safety and well-being of your students, of your future, of your educators, then somebody needs to step in...and we are asking the state board to do that and so that with their authority

“I wouldn’t go to my doctor’s office and say to them, ‘You know what? I don’t think you know what you’re doing just because you have a medical degree. Why don’t you do this?’ But we do that all the time in schools. With our profession, we have everybody telling everybody in education how to do their job, but we would never dream of doing that to an attorney or a doctor. But we are going to tell the Governor how to do his job because we need him to do his job,” Benson said.

Maddie Fennell, NSEA Executive Director explained that the union doesn’t see this as a partisan issue and that it represents educators and school staff from cross section of the state with different political affiliations.

“Almost half of our members are Republicans. This is not what this is about,” Fennell said.

The entire press conference including reporter follow-up questions can be found below: