Can the unemployment bonus prevent you from getting rent assistance?

You can reapply to Douglas County's rent relief program now that it's gone, the program's director said. 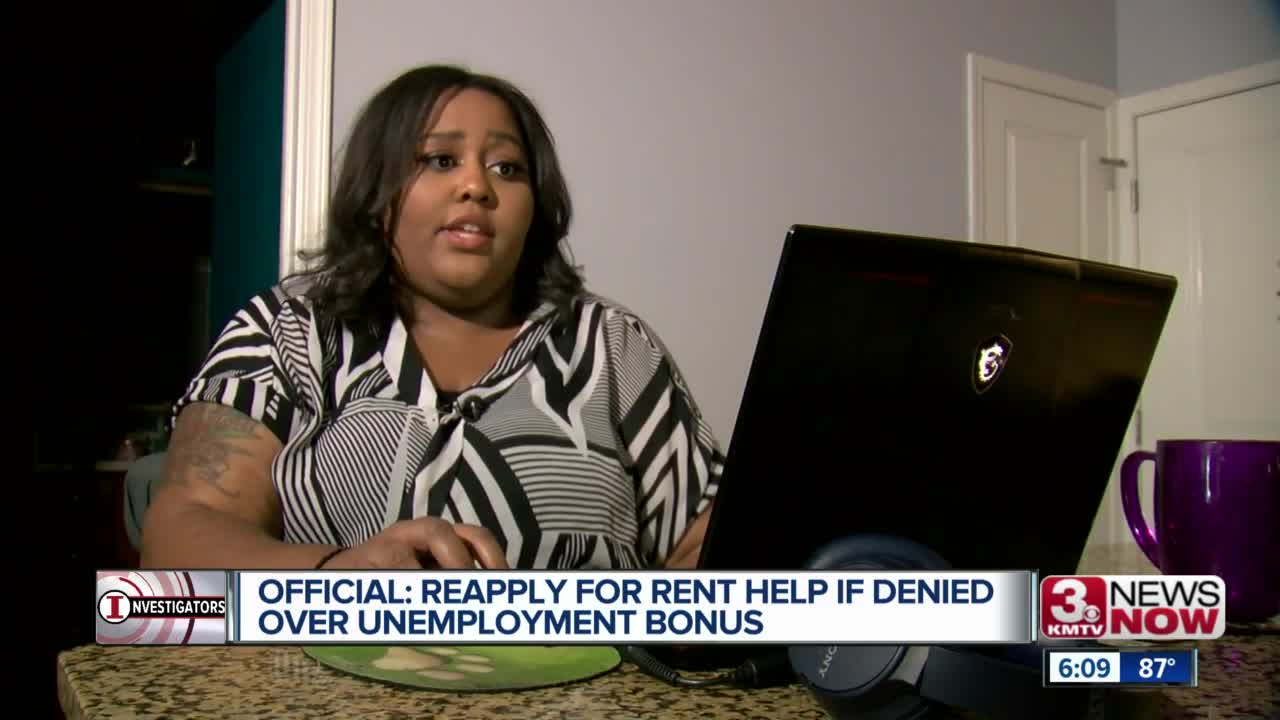 You can reapply to Douglas County's rent relief program now that it's gone, the program's director said.

OMAHA, Neb. (KMTV) — Update: On Friday, Davis' rent assistance application was accepted, and Sewick reiterated that anyone denied because of the $600 bonus should reapply with proof of the new weekly unemployment amount.

"When we process cases we are projecting income based on the documents they provide our department showing their monthly income pre and post COVID-19," Sewick said Friday. "That said, those individuals who are receiving unemployment are being looked at differently due to the significant change in their income once the additional $600 weekly benefit ended."

Olivia Davis hopes the fourth time will be the charm.

She's applied four times to Douglas County's rent relief program, a fund of $10 million dedicated to helping Douglas County residents pay rent they owe if their pocketbooks took a hit due to the pandemic. She hasn't been accepted yet.

Last week, because of the federal unemployment bonus of $600 each week, she was told her income increased after she lost her two jobs due to the pandemic.

Thursday, Davis initially thought she was denied a fourth time. However, the program's director, Melissa Sewick, said she hadn't been denied. Davis said she was told a final decision will come Friday.

She received an explanation email showing her weekly income had increased by $8.46 on average since the pandemic hit, despite losing two jobs. Davis' weekly income is down to $348 in unemployment benefits, a far cry from the $948 she received from a $600 federal bonus that lasted through July 25.

Sewick said economic hardship can be shown by comparing a snapshot of current income to pre-pandemic income.

"A very small percentage" of people were disqualified because they made more through unemployment than they did beforehand, she said. As of Monday, 33 applications were denied for failing to show a pandemic-related negative impact, many of them due to the unemployment bonus.

"All of those individuals are able to reapply for assistance," Sewick said. "They can apply in August...because at that point due to the elimination of the extra $600 per week, they do have a financial hardship now due to the COVID-19."

Although Davis' third application was denied last week for that reason, Sewick said that's because there wasn't valid documentation for this month showing the expiration of the $600 bonus.

Davis said information for August was provided. But all things point to Davis' August rent eventually being paid by the county. She also reached out to Congressman Don Bacon's office. According to an email sent to Davis, they got an answer similar to the one we did: "if you apply again, you should be eligible for assistance."

"As long as nothing else has changed, I think that we should be able to approve that case," Sewick said.

Why has Davis had to apply so many times?

The application process has no built-in appeal or edit option, meaning the best option is often to resubmit the whole application. However, Sewick said they follow up for more information on about 9 of every 10 applications.

"We are doing a lot of follow up, and then there comes a point where we have to make a decision and we can't just sit on a case if we're not getting the information we need," Sewick said.

First, Davis gave the wrong email address for her landlord, Sewick said. The landlord is a necessary part of the process for verification.

The second time she applied, Davis was told she didn't submit enough information. She said no follow up questions were asked. Each time she's been denied, she's reapplied.

"Very few cases have been just flat out denied (for lack of documentation)," Sewick said, but she said it happens if little to no information is given up front.

Have some landlords refused to participate?

"We've talked to some landlords that just don't want to receive the assistance, for a myriad of reasons," Sewick said. "But that's been very, very few."

The county is working on educating landlords about the process.

How much longer are the funds expected to last?

As more time passes since the end of the $600 weekly unemployment bonus and savings run out, Sewick thinks more people will rely on Douglas County's program.

"I'm hopeful that $10 million will be enough, just because I hope that our community isn't suffering that much," Sewick said. "But the reality is we're going to get hit hard."

The board has already lifted the limit of four months rent, and they'll reevaluate the $4,000 limit as time goes on.