The program is in local K-12 schools, too 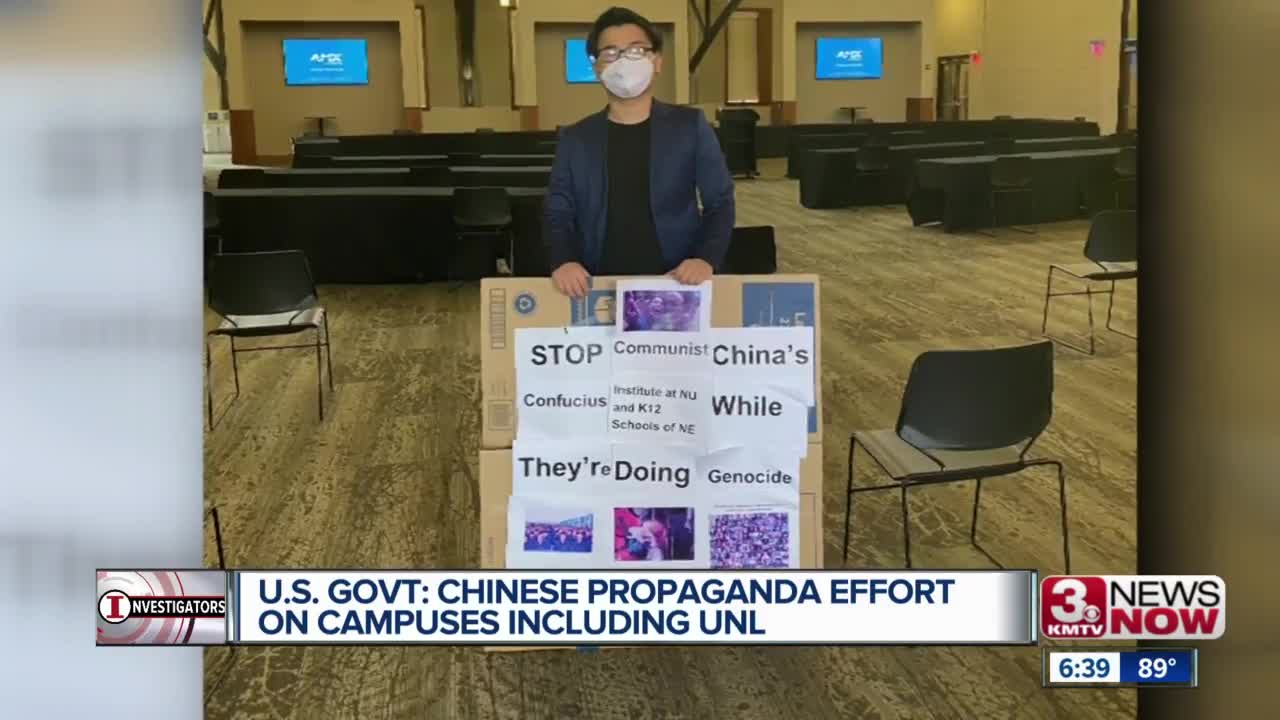 LINCOLN, Neb. (KMTV) — Xi Zhang, a University of Nebraska Omaha student from China, said he was arrested on June 4, 2014, while protesting at Tiananmen Square on the anniversary of the 1989 pro-democracy protest.

Zhang is continuing his advocacy against the Communist Party, this time against a University of Nebraska-Lincoln program that receives support from a division of the Chinese government.

UNL's Confucius Institute and 65 others at U.S. colleges are funded in part by Hanban, the Bejing headquarters of the program. Hanban is a division of China's Ministry of Education.

The mission of UNL's Confucius Institute, like the others, is to teach the Chinese language, culture and society, it says.

But Zhang says China's actual goals in its involvement with the program are nefarious, and Thursday he learned the U.S. government agrees with him.

The institute at UNL partners with K-12 programs across Nebraska, including language teachers located at metro-area high schools Omaha Central, Omaha Northwest and Marian, according to its website.

"Beijing’s public diplomacy relies on these communist outposts so they should be forced to register as foreign missions," said Sen. Ben Sasse, R-Neb. "Teaching Mandarin at campus institutes is mainly a cover story for Chinese Communist Party spying."

A UNL spokesperson gave no comment on the State Department's decision or 3 News Now's questions about the institute.

In response to the move, China said the U.S. is trying to “demonize and stigmatize” the relations between the countries, according to the Associated Press. A spokesperson said the Confucius Institute helps “bridge and link to help people from all over the world learn Chinese, understand China, and strengthen educational and cultural exchanges and cooperation between China and other countries.”

In 2014, the American Association of University Professors condemned Confucius Institutes.

"Allowing any third-party control of academic matters is inconsistent with principles of academic freedom, shared governance, and the institutional autonomy of colleges and universities," the organization said.

Since 2014, 45 schools have shut down their Confucius Institutes, according to the National Association of Scholars. The list include several of UNL's Big Ten peers: Iowa, Illinois, Maryland, Michigan, Minnesota, Penn State, and Purdue. Michigan State and Rutgers are the other Big Ten schools with the institute. Maryland's was the country's first.

UNL's contract with Hanban states that Hanban "acknowledges that UNL and its faculty ultimately have the right to determine the content of the curriculum."

But under a section on the "scope of activities," the program is limited to topics related to language and culture. Other topics can be done "with authorization and by appointment of the Headquarters (of Hanban in Bejing)."

In March, the director of the program denied any Chinese influence in an interview with The Daily Nebraskan.

The program at UNL began in 2007 and was the nation's 20th, according to its website. The contract was extended in 2018 to last through March 2022.

The contract say Hanban provides funding, which UNL much match. Hanban also provides teaching materials and sends Chinese language instructors or volunteer teachers, and pays their salaries, according to the contract. UNL provides "necessary administrative personnel and teaching staff," among other things.

Zhang said he supports education on Chinese language and culture, but said there's no necessity that these programs be tied so closely to the country's government.

The contract between UNL and Hanban is below in both Mandarin and English.