Doctor 'should've called 911 and had me committed': Mental health and seniors 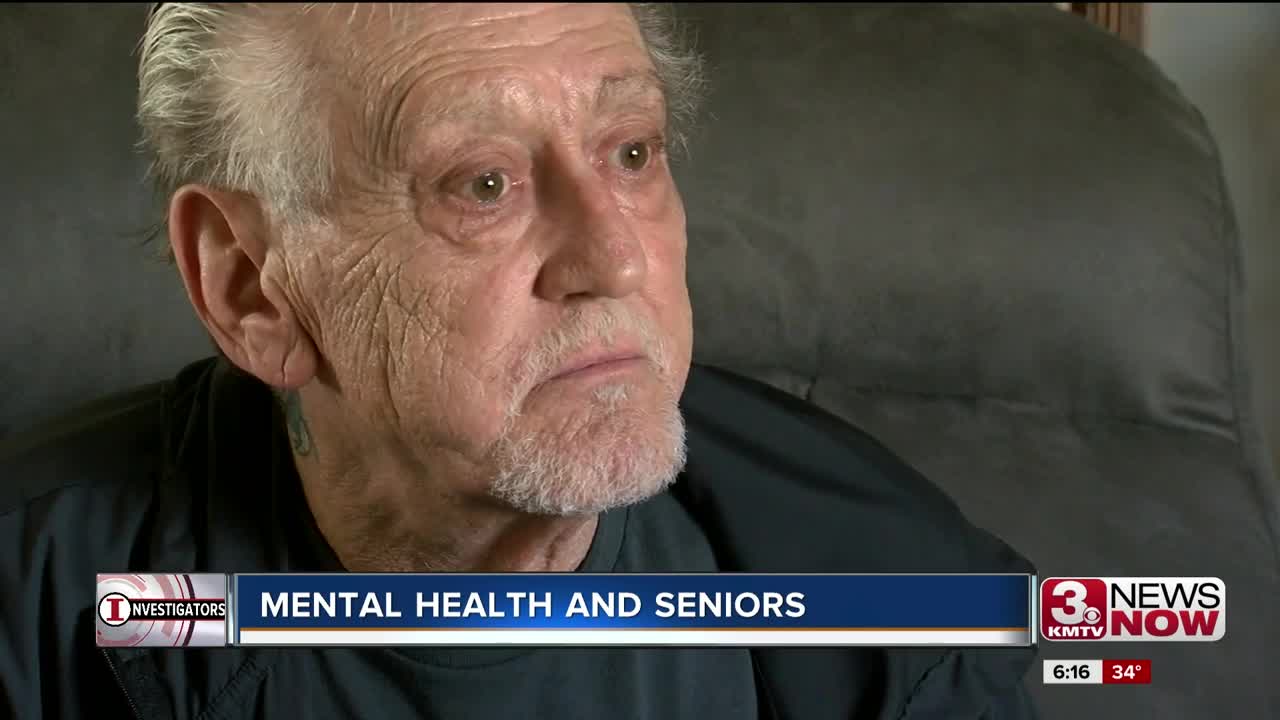 "I said I'm tired of life," Ross said. His care provider said, "What do you mean?"

"I said you'll see," Ross said. "She knew. And she should know, as my doctor, I would think, anyway, the state of mind I was in and what I was capable of doing."

Ross tried for help one final time. As he got off the provider's bus, he said he told the driver it'd be the last time he sees him.

After walking inside his quaint Council Bluffs home, he said he filled the palm of his hand with sleeping pills and took them all. He filled his palm again, and took those. He heard his heart begin to slow down.

Ross said it was the bus driver that informed someone, then a nurse showed up at his home, who called 911.

"(My doctor) should've called 911 and had me committed," Ross said.

Elderly men have the highest rate of suicide.

Among people 55 and older, 30 local suicides in 2019 were reported, according to the Kim Foundation. Their data is provided by three law enforcement agencies: the Omaha Police Department and the Douglas and Sarpy County Sheriff Offices. The foundation was concerned by a "spike" in that number from 2017 to 2018, when there were 19 and 31 suicides reported. Of the 30 reported in 2019, 26 were men.

Health care providers of all sorts have an opportunity to help before a suicide attempt, said Kelly Dineen, director of the health law program at Creighton University.

"A lot of people don't see psychiatrists. There's a shortage, it's hard to get into them, there's a stigma," Dineen said. "But people do see primary care providers."

About 45 percent of people who died by suicide contacted a primary care provider in the month prior, studies show, and that rate is higher for older adults.

Dineen said if someone told a provider they had a plan to attempt suicide, and did nothing, "that would be a violation of a duty that all health care providers have."

"It's been a while, but I can tell you when I went to nursing school, I had zero training on what to do if a patient told me that they had a plan (to attempt suicide)," Dineen said.

It's not that nothing is being done, they said. Hebenstreit mentioned Zero Suicide, a group which focuses on their belief that "suicide deaths for individuals under the care of health and behavioral health systems are preventable."

"The more we can talk about (mental health) and make those resources available and integrate that behavioral or mental health care into their other medical care," Hebenstreit said, "I think the more success we're going to have in reaching that population."

Older adults might not be as willing to reach out as younger people, Hebenstreit said, or might not know where to look for help.

"It can be difficult for older generations to really open up and talk about anything involving mental health, she said. "It's a very generational thing. Younger people now, they've grown up understanding how to process emotions instead of bottling everything up."

Dineen said there are disparities in the way old and young people are treated in the health care system.

"Their symptoms are often not paid attention to the same way that a younger person might be," she said. "That gets worse when you add in gender, race and other identifiers, even when you adjust for economic levels.

"You got a system, a society where they're not necessarily listened to."

Ross said his childhood was filled with emotional, physical and sexual abuse.

Adverse childhood experiences, or ACEs, are a list of ten traumas that studies have shown correspond with higher likelihoods of having health problems or attempting suicide. The questionnaire is available on Trauma Matters Omaha's website, and includes questions about neglect, abuse and family situations during childhood.

"Early childhood experiences don't just affect our behaviors, they also have an influence on our biological structures," Kroeker said. "That's not something that necessarily stops when the abuse stops."

Individuals with four or more of the advertises are twelve times as likely to attempt suicide in adulthood, Kroeker said.

Ross had eight. He provided us with a 1962 newspaper article of his father's conviction of child abuse, for example. "My life has been hell," he said.

"For each additional adversity somebody has, they're at an increased risk for these long-term negative outcomes," Kroeker said.

Those negative long-term outcomes include suicide and depression, but also include things like lung disease, obesity, problems accessing health care and missing work.

Ross said he's still struggling with stress and sleepless nights. But he understands he needs help.

"Awareness is key," Kroeker said. "If we are willing to talk about it, that's the first step to being able to address and heal from these trauma and other issues."

People 60 and older and adults with disabilities may call the Institute on Aging's Friendship Line at (800) 971-0016.