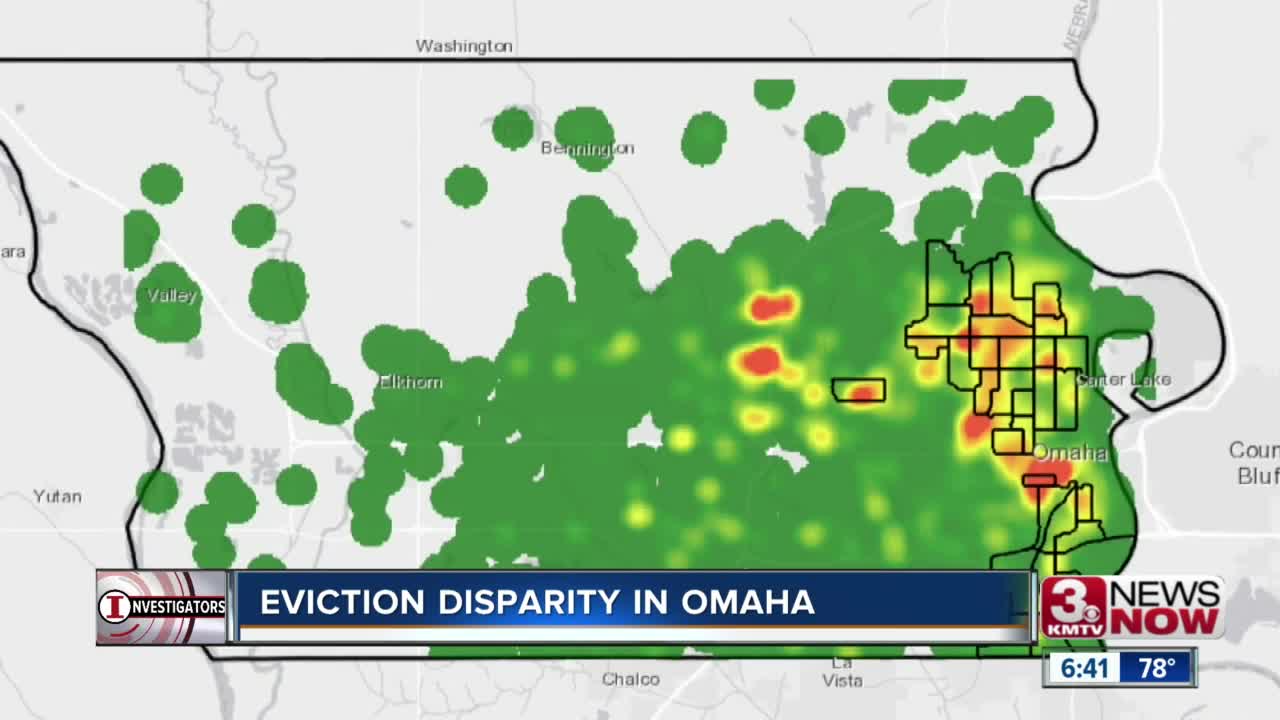 Non-white majority census tracts have more than double the evictions than majority-white tracts.

OMAHA, Neb. (KMTV) — Each year since 2012, Douglas County has seen no fewer than 3,300 evictions ordered of people and their families from their homes.

Those evictions are concentrated where racial minorities outnumber whites, according to a study from a partnership between Creighton University's Social Science Data Lab and Family Housing Advisory Services.

Specifically, the study finds evictions are concentrated around North Omaha and public housing complexes near downtown.

The authors, Creighton Professor Pierce Greenberg and retired housing lawyer Gary Fischer, said it outlines a problem that exists in Omaha and other communities. They hope it will open a conversation on how to address systemic inequalities.

Greenberg and Fischer said it's not always as simple as a tenant being unable to pay rent. For example, a tenant may withhold rent over a maintenance issue, and could get evicted for not paying anyway, especially when entering the court's eviction proceedings without a lawyer.

"But it is also important to be clear about the source of this inequality," the report says. "Historic housing policies and practices that have locked racial minorities into sections of the city where investment was discouraged."

They cite a map from the Home Owners' Loan Corporation of 1935, which marked North Omaha as "hazardous" and recommended lenders not make loans in the area due to "undesirable population." The authors say this and other trends and policies led to underdevelopment in North Omaha.

Evictions directly hurt families in ways other than losing a home, the authors write. It's compounded by harming credit and a loss of possessions.

They also say evictions harm the community by contributing to turnover. In 18 Omaha census tracts, a family is evicted once every week.

"The neighbors may be less likely to know each other; the streets are less safe; organizing social events can be challenging," they wrote. "Aside from the clear socioeconomic differences that exist between these neighborhoods, the impact of housing instability frays at the social fabric of the community overall."

Greenberg and Fischer found a correlation with education outcomes. In the ten Omaha Public Schools elementary school attendance zones with the most evictions, 67 percent of students are below standards. In the ten with the fewest evictions, 49 percent are.

They suggest reducing the number of evictions from subsidized housing. The Omaha Housing Authority accounts for 7% of all evictions from 2012-2019. Additionally, only 1% of people facing eviction had legal representation. They believe guaranteeing representation in court would help.