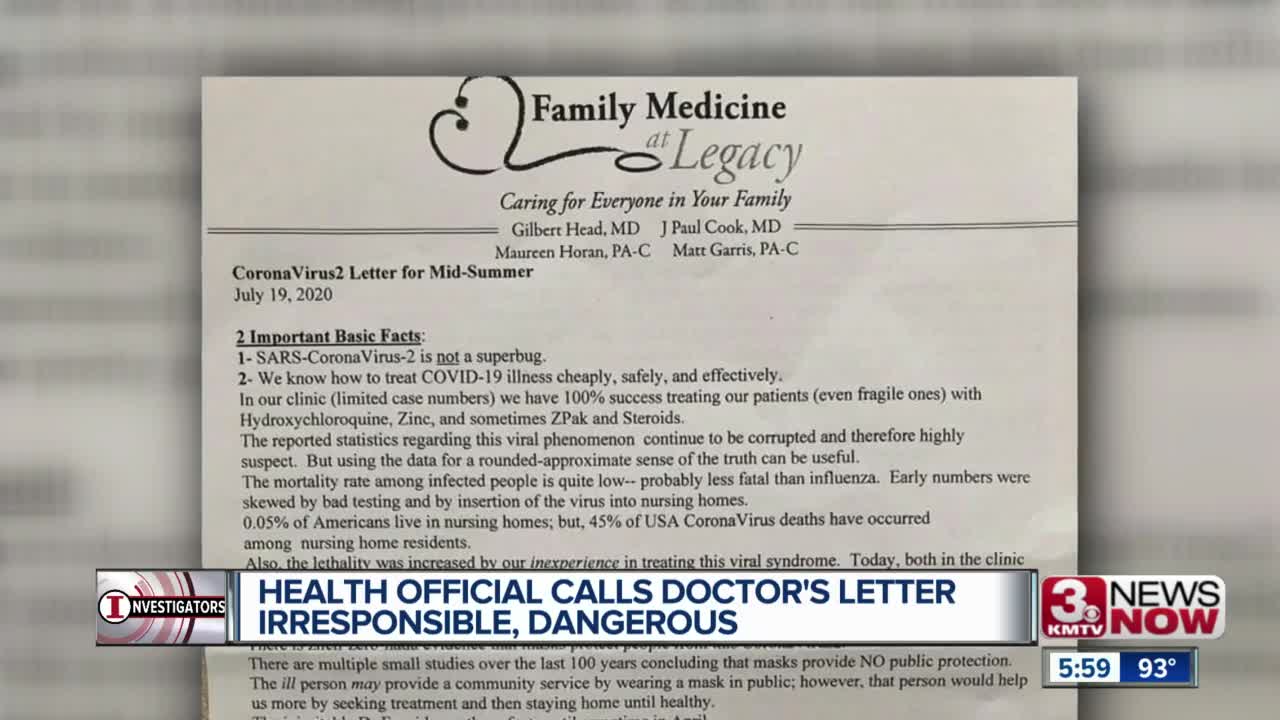 It asserts there's "zilch-zero-nada" evidence that masks protect people from this coronavirus.

OMAHA, Neb. (KMTV) — An unconfirmed but not denied letter allegedly sent to all patients of an Omaha doctor's office includes several assertions that conflict with what health officials have said about SARS-CoV-2.

It has letterhead of Family Medicine at Legacy, a west Omaha office. The MDs listed are licensed in Nebraska.

"If we find CoronaVirus2 in you, we're going to treat you. Then, you'll be fine in a week or less," the letter says.

It asserts there's "zilch-zero-nada" evidence that masks protect people from this coronavirus.

"There are multiple small studies over the last 100 years concluding that masks provide NO public protection," it reads.

Dr. Anne O'Keefe, the senior epidemiologist at the Douglas County Health Department, said the letter is "irresponsible and dangerous" and "could cause us to have some back steps in our response."

"We are trying to communicate our recommendations that are based on evidence and based on authorities like the CDC," O'Keefe said. "We just have to continue to put out that sound information and try to counter any misinformation that comes out."

The letter also claims the office has a 100% success rate treating the novel coronavirus with Hydroxychloroquine, Zinc, and "sometimes ZPak and Steroids," and that it's done "cheaply, safely, and effectively."

O'Keefe said there's no evidence to support those treatments. The FDA revoked the emergency use authorization for Hydroxychloroquine in June, and said the malaria drug has "heart rhythm problems and other safety issues."

The office did not respond to our requests for comment on Friday. The person who answered our calls declined to confirm the legitimacy of the letter.

It calls the statistics surrounding the coronavirus "corrupted and therefore highly suspect" but says the virus is "probably less fatal than influenza."

The letter is causing a range of reactions from anger to approval, but not much in between. The office had just fifteen reviews before yesterday. As of this writing, reviewers have left 37 one-star reviews and 14 five-star reviews since yesterday.

"Spreads misinformation in a pandemic. Negligent at best, killers at worst," someone wrote on the office's Google reviews page.

Another said: "Great doctors! I’ve been going here as well as the rest of my family for 18 years. I have never been given bad advice or false information and my health has always been their first priority."

In a section on schools, the letter says children are "nearly bulletproof" and "nano-carriers, at worst." They "don't envy the planners" of school reopenings.

"Faces to students are probably more important than masks," it says.

O'Keefe said the letter's author is wrong when they say schools have never closed over influenza. It's happened as recently as 2009, and during the Influenza pandemic a century ago.

"The businesses and professionals we license are expected to provide quality care and services in safe environments."

The agency can't share whether or not any investigation is underway, she said.

The Nebraska Academy of Family Physicians said it will "take this back to the Executive Committee for review and discussion" in response to a 3 News Now viewer who reported the letter to the group. The group declined a request for comment Friday.