When can the police use force?

Protesters, including State Sen. Tony Vargas, have raised questions about unnecessary use of force. 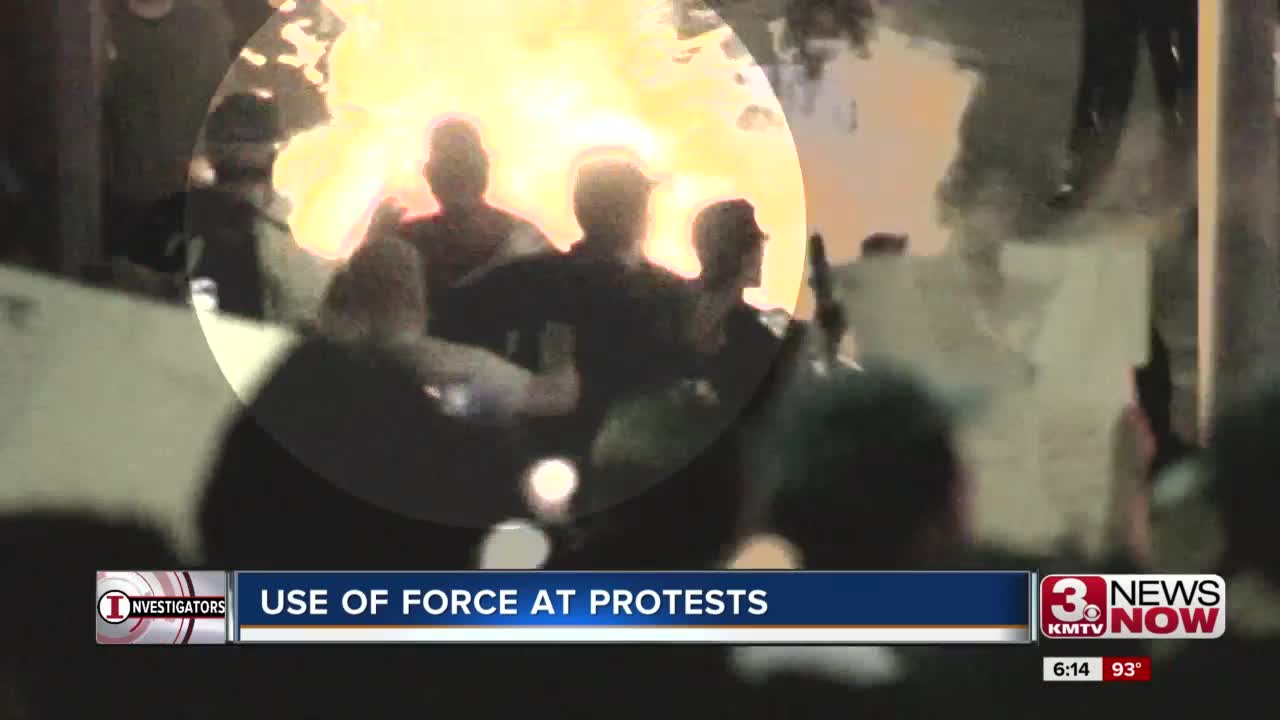 Protesters, including State Sen. Tony Vargas, have raised questions about unnecessary use of force.

OMAHA, Neb. (KMTV) — 17-year-old Monroe Glazeski said she was peacefully protesting the death of George Floyd and systematic racism at 72nd and Dodge on Friday night when what she thought was a tear gas canister landed in her bicycle's basket.

She couldn't tell exactly what it was. Never asked. It happened fast. But all of a sudden, she couldn't see and had trouble breathing. She dropped the bike and ran.

"I can't see because of the tear gas," she said. "And I can't breathe, because it was right next to me."

If it was tear gas or another chemical agent, it shouldn't have happened, according to the Omaha Police Department's policies and procedures manual.

The 838-page manual, under a section on "less-lethal weapons," says target areas for chemical agent projectiles used in order to saturate an area should be either the ground in front, to the side of, or above crowds — not into a protester's bicycle basket. Before used, officers should use "loud verbal commands."

Glazeski's parents were also there. Tim Glazeski said the police weren’t more than 15 feet away while they fired the weapons, but said white privilege helped him get away relatively unharmed.

"Angry bystanders threw plastic water bottles at the heavily armored police," he wrote on Facebook. "A few of us called for them to stop. I saw a few miss their targets and hit young women of color in the front lines. The police seemed to decide that since this was a slightly less peaceful protest, they could start using their toys."

State Sen. Tony Vargas of Omaha is another protester that felt force was used unnecessarily. He said he and other peaceful protesters were hit with flash grenades and pepper bullets. The Omaha Police Officers Association called for him to apologize, saying only violence led to forceful responses from officers.

Less-lethal weapons including tear gas, pepper balls and batons should only be used on "Actively Resistive" or more serious subjects, according to the manual. Officers should be able to explain why less-harsh responses wouldn't have been effective. They also should "take into consideration the safety of innocent bystanders, other officers, and the subject."

"Chemical agent is NOT permitted when interacting with Passively Resistive Subjects, since it would be inconsistent with this order’s intent," the manual says.

Passively resistive subjects "interact with officers by failing to follow the lawful orders of the officers." Actively resistive subjects "interact with officers by physically impeding the officer’s effort to exert control over them. They may display a number of actions including, but not limited to the following: running away, pulling away, flailing their arms, circling to face an officer, and/or knowingly hiding from law enforcement efforts to locate them.”

There are other variables at play here. Omaha Police weren't the only ones at recent demonstrations. The state patrol and National Guard joined, so the Omaha Police Department's guidelines aren't an end-all-be-all. The policy reads that it "does not apply in any criminal or civil proceeding."

The manual also seems to provide for plenty leeway, saying "the totality of the circumstances," including "the number of potential assailants and officers" should be considered in each situation.

"You have to make sure you have a balanced response, because you don't want to excite them," said Trevor Thrasher, a tactical specialist with 88 Tactical. "But at the same time you have to have a firm hand when violence occurs against you."

3 News Now Investigators invited the Omaha Police Department to comment, but Lt. Sherie Thomas said Wednesday that the department is "dealing with the things going on in the city, i.e. protests and will not be able to assist with your story at this time."

Adam Sipple, legal director of the ACLU of Nebraska, said only violence or clear evidence of imminent danger can justify a protest being shut down. He also called Mayor Jean Stothert's order unconstitutional. It has since been rescinded.

"Unfortunately, Mayor Jean Stothert has executed an emergency order significantly restricting the freedom of all Omaha citizens," Sipple said in a statement. "Like other cities, Mayor Stothert imposed a curfew of 8:00 p.m., which will prohibit assembly and protest more than an hour before nightfall. But unlike other cities, Mayor Stothert went further, imposing a city-wide ban on all gatherings of more than twenty-five people, even during daytime hours. At a time when so many in our country and in the City of Omaha feel hurt and powerless, at a time when so many feel their government is not listening to their concerns, Mayor Stothert has chosen the misguided and extreme remedy of banning peaceful protest."