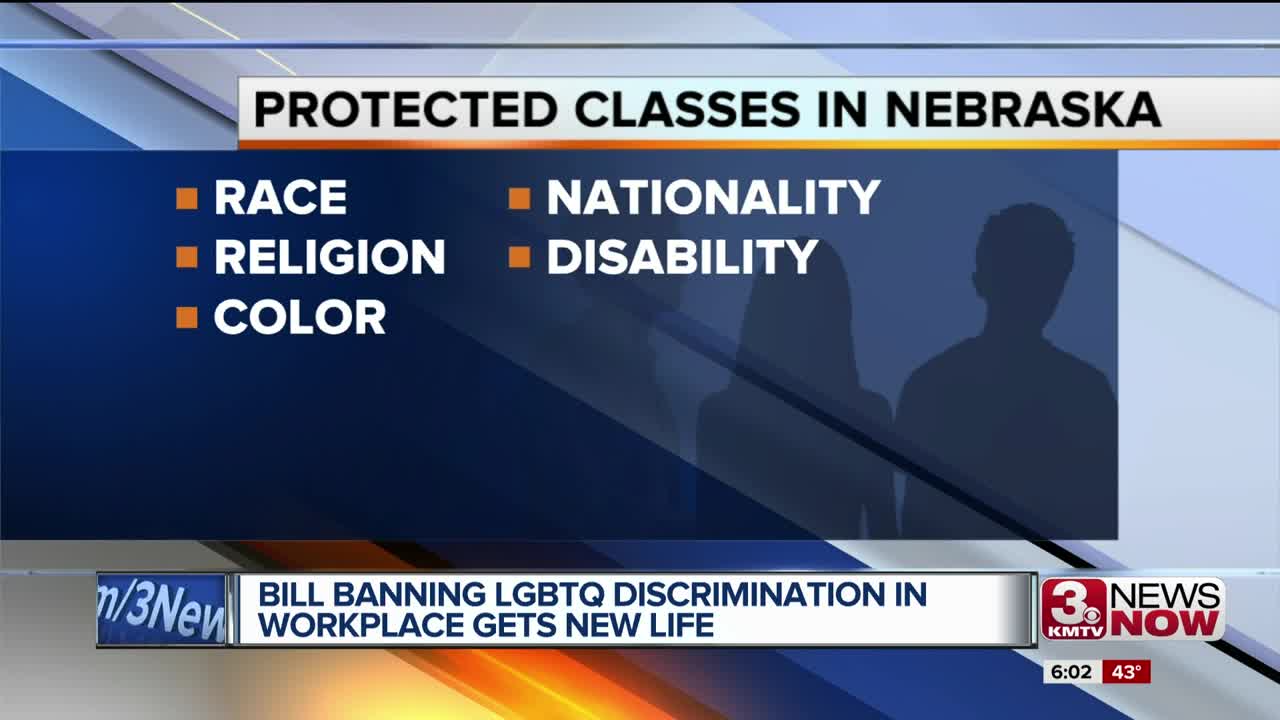 LINCOLN, Neb. (KMTV) — It's a bill that's tried and failed in the Nebraska Legislature for a number of years, now supporters think it could pass.

Current state law bans employers from discriminating against employees on the basis of race, religion, gender and disability, among others.

But business owners can fire employees for being gay or transgender. The proposed bill would bar them from doing that.

For Luke Peterson, getting fired because of his sexuality isn't some hypothetical, he experienced it, 15 years ago.

"My employer at the time pulled me aside into his office and told me he doesn't condone my immoral behavior, that was the first statement. The second was he called me of questionable character since I came out and then fired me on the spot,” says Peterson.

Now he's looking for closure. After a three hour debate last year it didn't seem like it was going to happen, with less than 33 senators on board .

But there may be a revival. The Nebraska Chamber of Commerce recently signed on to the bill, giving renewed optimism that the unicameral will take it back up.

The state chambers says the bill helps the state keep and recruit young people. It's an argument both the Omaha and Lincoln chambers have made for a while.

"Young people tell us, what are you doing? We can't believe this isn't already a protection. So we want to attract 18 to 34 year olds to this state and keep as many as we can,” says Bruce Bohrer, executive vice-president and general counsel at the Lincoln Chamber of Commerce.

Those against like Governor Pete Ricketts and the Nebraska Family Alliance say businesses don't need more rules and regulations and it would lead to unintended consequences.

"You should be able to conduct your business to reflect your deeply held values," says Karen Bowling, executive director at Nebraska Family Alliance.

And that Nebraskans tend to treat everybody with dignity and respect already.

"Your employees, if they're doing their job, let them do their job. They should be able to do that, we don't need extra legislation to try and provide so-called protections that actually don't end up protecting," says Bowling.

For Peterson, it's about giving the gay community equal access to a paycheck, something 21 states, including Iowa already do and he's noticed.

"I have thought about leaving. You could go across to Iowa and have these protections,” says Peterson.

Ultimately the US Supreme Court may have the final say. They're currently evaluating whether the Civil Rights Act bans discrimination of LGBTQ people in the workplace.

Bill sponsor Senator Patty Pansing Brooks needs to prove she has 32 other senators in support if the bill is going to go back to the legislative floor.

The Omaha City Council approved a similar city-wide ordinance in 2012.