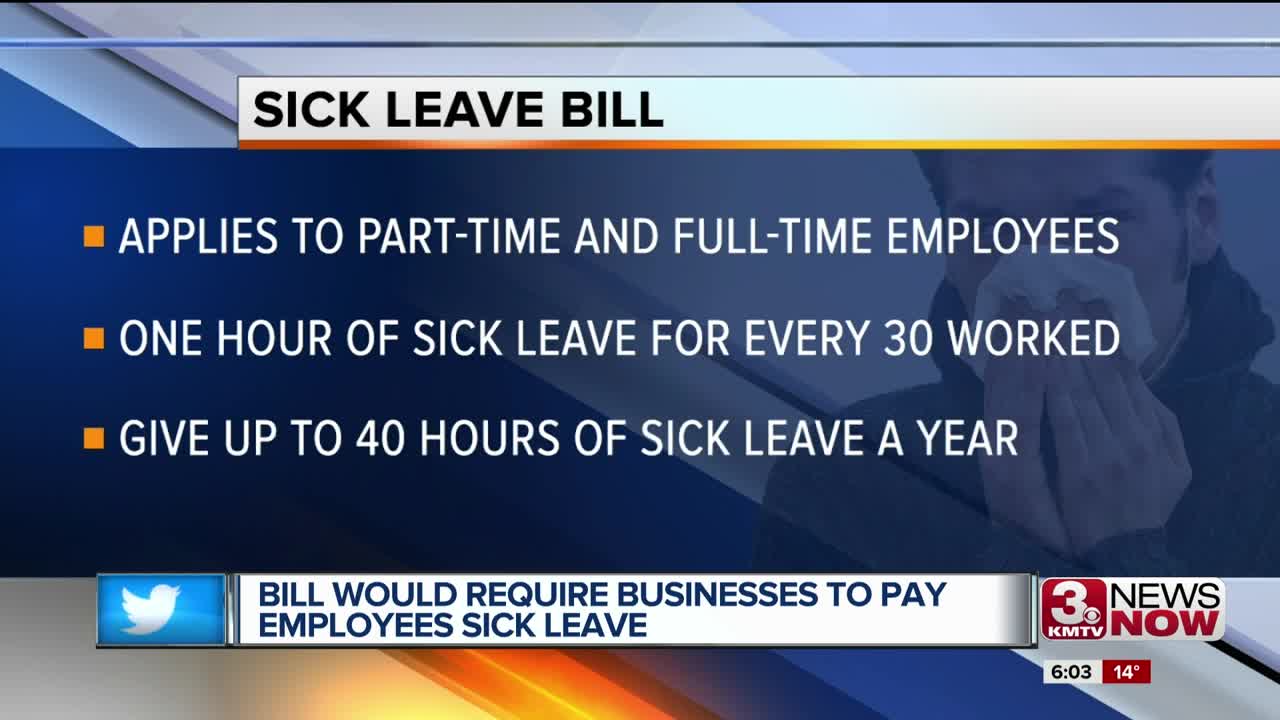 Who introduced it and what it would mean for workers.

LINCOLN, Neb. (KMTV) — Right now, 68 percent of people nationwide receive sick leave, with 28 percent of part-time employees getting sick days. But Nebraska lawmakers are trying to fill the gap, requiring businesses give out some sick leave to their employees.

"This isn't unreasonable, this is a way to encourage young people to come and stay,” says state senator Patty Pansing Brooks of Lincoln.

It's a bill that supporters say will help people stay, or even come to the state. LB 305 would give one hour of sick leave for every 30 hours worked and would give up to 40 hours a year to employees.

"From our perspective it is incredibly important to get a basic guarantee of sick and safe leave. We're simply asking for five days in an entire year," says Tiffany Seibert Joekel, research and policy director, Women’s Fund of Omaha.

Employees could use it for an illness, injury, to care for a family member or to deal with situations like domestic abuse or stalking. Tiffany Seibert Joekel with the Women's Fund of Omaha says economic stability is a huge barrier in a survivor leaving an abuser.

"Many of the institutions a survivor can go to achieve safety are 9 to 5, they need to seek help during the workday and if a survivor cannot access that support it makes leaving an unsafe situation almost an impossible decision,” says Seibert Joekel.

But the bill stalled Thursday with conservatives worried about the bill affects the business community in rural Nebraska.

The bill would apply to any business with four or more employees and if those employees work over 20 weeks out of the year.

"We are fighting the internet right now with our local businesses, trying to keep them open. And one more burden on their back is not what they need at this time,” says John Lowe, state senator from Kearney.

Several senators argued that businesses could reduce staff and benefits if forced to comply. Senator Mike Groene went as far as to say it could be urban conspiracy, out to get rural Nebraska.

"Keep it in eastern Nebraska. If you want to do it for three big counties, fine. But leave us alone."

12 states and Washington DC, have already passed sick leave in some capacity. Bill sponsor Sue Crawford will need to find 33 votes in the unicameral if she wants Nebraska to be the 13th state.