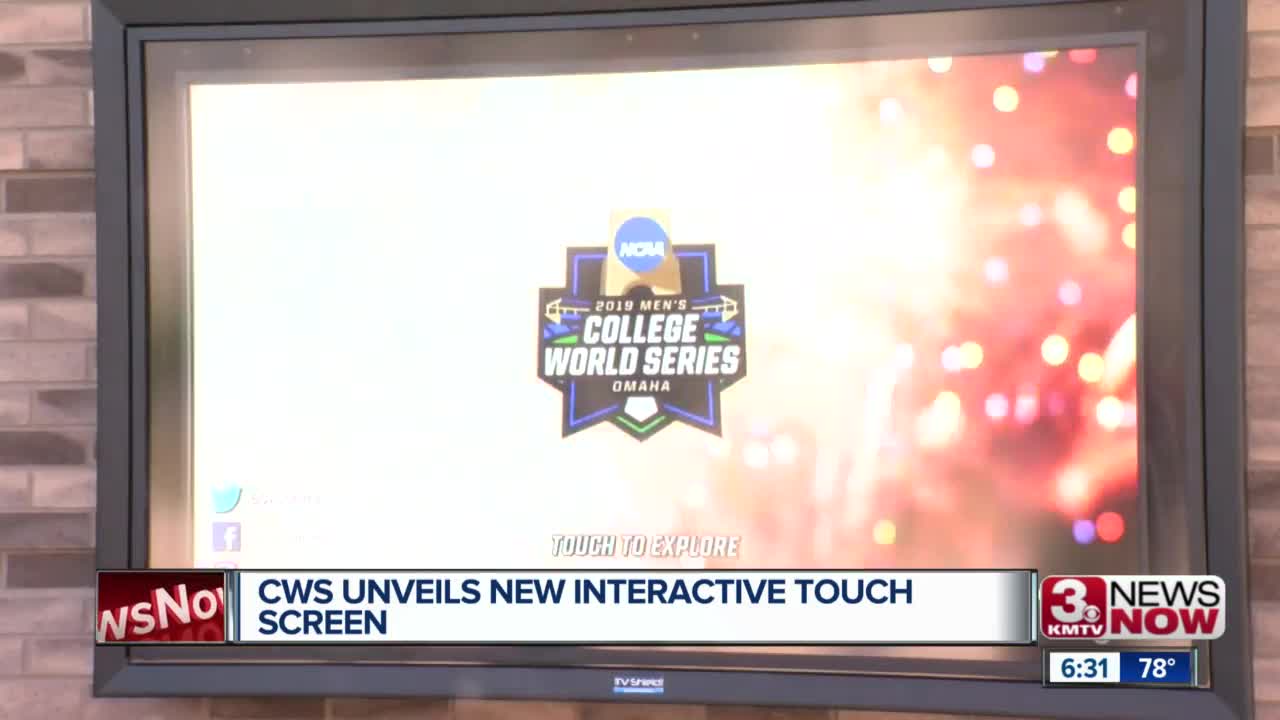 Located at the corner of 13th and Cuming Street, the new touch screen is situated near the famous Road to Omaha statue.

“We see fans coming like a magnet to the Road to Omaha sculpture to get their picture taken now we can enhance that experience,” said Kathryn Morrissey, the executive director of CWS of Omaha Inc. “We can show them inside the stadium even if they don’t have time for a tour. They can spin to the touch screen and get a sense of the excitement. We aren’t crowning the kings of college baseball today but we do have something to unveil.”

Fans can read about the history of the CWS, learn about past champions, look up schedules for the series and take a virtual tour of the inside TD Ameritrade Park. The 65-inch touchscreen will be the marketing tool of the College World Series of the future 365 days a year.

“What we want to do is bring the experience of the College World Series to the screen where visits from all over come and can experience what it is like,” said Evelyn Bartlett, the managing partner of data solutions at SectorNow, the Lincoln-based company in charge of designing the interactive display.

With a simple simple touch, visitors can learn about the series history, its stars and revisit its storied past at Rosenblatt Stadium. One of the interactive features is a video sequence of Rosenblatt being demolished.

“It carries the history from that into where the stadium is now,” Bartlett said.

In the midst of a pandemic it might not seem like the safest idea to have a touchscreen but the makers of the screen say it is safe and they will be cleaning it regularly.

“It’s an outside sign and outside is better than inside,” Bartlett said.

“It’s as simple as wiping the touchscreen with a Clorox wipe on a periodic basis which is what we will be doing and that should keep everybody safe,” Morrissey said.

Without college baseball or the College World Series this year, there have been less visitors in the area by the stadium compared to a normal June. Businesses in the area are taking a hit as well without having events such as the CWS. Morrissey said the screen can help bring the excitement of the CWS to fans all year round.

“This year in particular to be able to talk about something uplifting is good for our psyche and good for our event,” Morrissey said. “The goal of the touch screen is to give fans a glimpse of the CWS, even if they can’t go to a game.”

The interactive board cost $37,000 to build and was funded by the Douglas County Visitor Improvement Fund in a grant to the College World Series.

As of now this is the only interactive screen at the stadium but Morrissey said more could be added in the future.