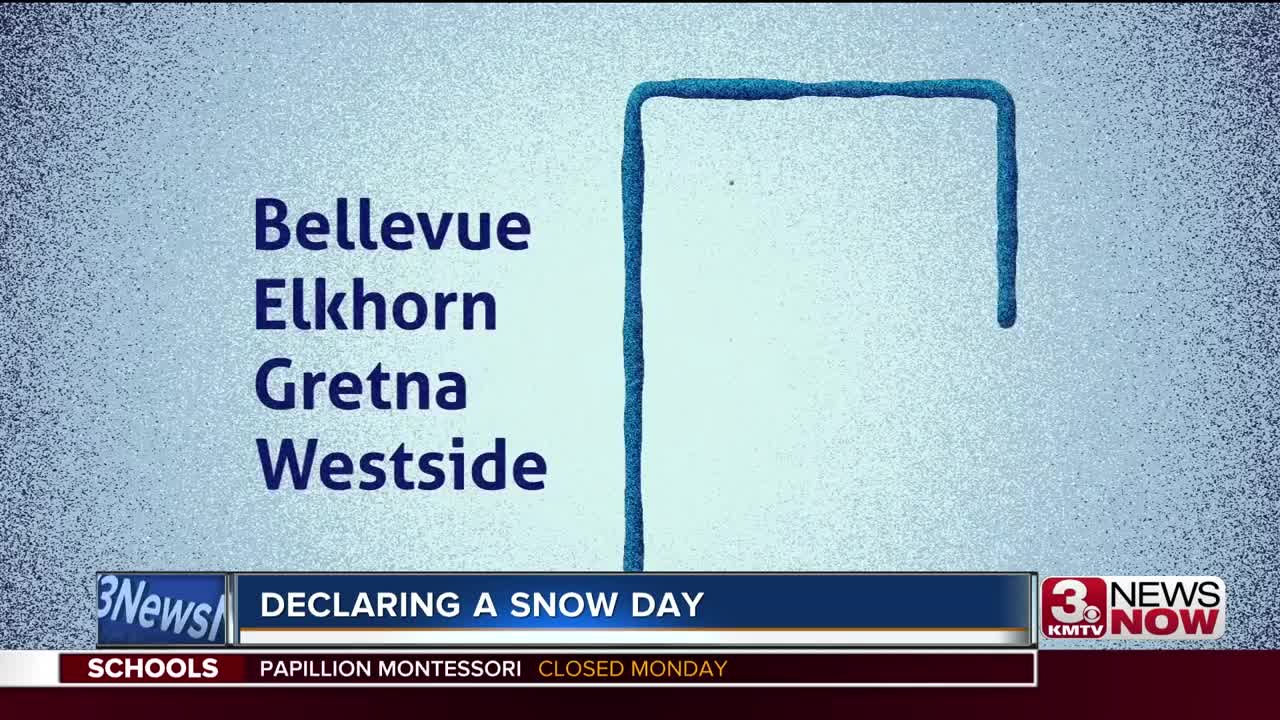 OMAHA, Neb. (KMTV) — While most kids sleep in on a snow day, Kala Morrissey with Omaha Public Schools is often up late or getting up early researching. If the district does not declare a snow day the night before, she says she gets up early for a conference call around 4 a.m. Before that meeting she's talking to district leaders, Douglas County, Metro Area Transit, the City of Omaha and the National Weather Service.

"Our goal is to always get the message out to families by 5:30 a.m. so that they have time to prepare for whether their students are going to have school that day," said Morrissey.

While comparing each cancellation is like comparing snowflakes, Morrissey says there are some things that often trigger a day off.

"Significant snowfall amount, which is typically more than about four inches and then we also look at temperatures where we know that within 15 to 20 minutes frostbite could set in and we also look at significant icefall," said Morrissey.

Whatever the reason a district decides to cancel class, a snow day is far from being a day off for the people who have to decide to close school doors.

"It's a difficult decision for any district. We always want to keep student and staff safety at top of mind and that is our number one priority, but we also want our kids in our schools and learning every day. So we want to make sure we are keeping both of those in mind when we are making that decision," said Morrissey.

How many snow days can each district handle?

Council Bluffs Community School District
The district's calendar allows it to absorb three days. However the district has had to cancel class on five occasions so far. The original end date for the school year was scheduled for May 31st, however district officials say they have designated June 3rd and June 4th as potential snow make-up days.

Elkhorn Public Schools
Right now Elkhorn Public Schools' last day is scheduled for May 24th. School officials say K-11th grade have an additional nine days remaining before the district would need to consider adjusting the academic calendar. However, the seniors have just three days left in the snow day bank. So far this year, Elkhorn Publis Schools has had to cancel school five times.

Gretna Public Schools
Superintendent Kevin Riley says his district has had six snow days. He says it would take another seven snow days before the district would need to consider adjusting its academic calendar.

Millard Public Schools
So far this year, the district has canceled school five times. The district's last day is scheduled for May 31st. With Mondays latest cancellation district officials say they will have to consider their options.

Omaha Public Schools
Officials at OPS say they haven't calculated how many days they have left, but they are confident they will not have to adjust the calendar. So far, the district has had to cancel school five times.

Papillion La Vista Community Schools
The district already pushed it's academic calendar back from May 23rd to May 24th and it now may have to push its calendar back even further. District officials say they budgeted for three school cancellations and they've had to cancel school six times so far this year.

Westside School District
So far this year, the district has had to cancel class on five occasions. The district says they budget 10 days for elementary students, 13 for middle school students and 11 for high school students.