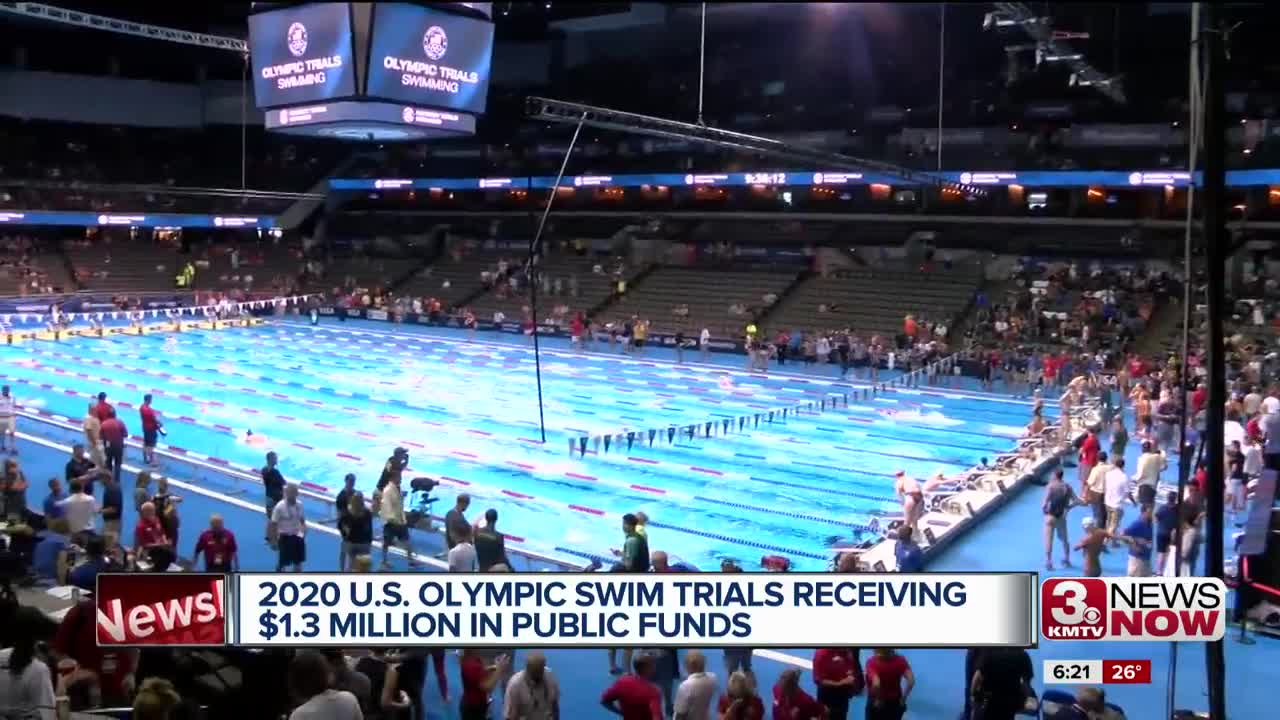 OMAHA, Neb. (KMTV) — The U.S. Olympic Swim Trials will be returning to Omaha in June 2020 and this time around, taxpayers, sponsors and city officials helped pay more than $1 million to keep the trials in Omaha.

Big events are big business and it costs a lot of money to keep away competing bid cities. City organizers promised $3.1 million dollars from donors, sponsors and taxpayers to keep the event in town, with the public paying $1.3-million towards the trials. $750,000 came from the Omaha City Council.

"In 2016 we were a $74 million economic impact and we fully expect to surpass that in 2020," said Josh Todd, president of the Omaha Sports Commission. "50 kids give or take make the Olympics. For the other 1,400 kids this is their Olympics."

Todd said most of the rights fees came from tourist-related grants set aside for facilities and major events. The city of Omaha's $750,000 payment was spread out over a three-year period. The city's final $250,000 payment was approved at a January board meeting.

"If we're getting donations from the public sector to help with the rights fees to host this event, it's a great ROI," Todd said.

"When you invest $750,000 to get a return of $100 million, I think that is a pretty good investment," said Brinker Harding, a Omaha city councilmember. Harding said the amount of national television exposure the event brings can't be quantified in dollars.

"When you're on national TV prime time for seven nights a week, it's tremendous," Harding said.

On top of the nearly 1400 swimmers, Todd said 31-percent are under the age of 18, meaning they'll likely be accompanied by an adult to the trials. It's anticipated the swimmers will bring friends and family to the week-long trials who will all need hotels and places to eat. As well, the volunteers and nearly 300 media members covering the event will also be spending money while they are in town. The Omaha Sports Commission is expecting 28,000-30,000 hotel rooms to be filled during the swim trials.

Roughly four months out the trials Todd said 98-percent of the events are sold out with 90-percent of the spectators coming from out of state. Four of the eight dates are completely sold out.

"Not only does it build awareness for the city of Omaha and all of the great things that are happening here, it gives us an opportunity to tell that story," Harding said.

The methods behind economic impact studies are highly debatable and its validity is often scrutinized. However both the Omaha Sports Commission and Councilmann Harding said Omaha having an economic impact of $74 millon from the 2016 U.S. Olympic Swim Trials is accurate.

The city is expecting visitor numbers to be in the six-figures for the 2020 swim trials.