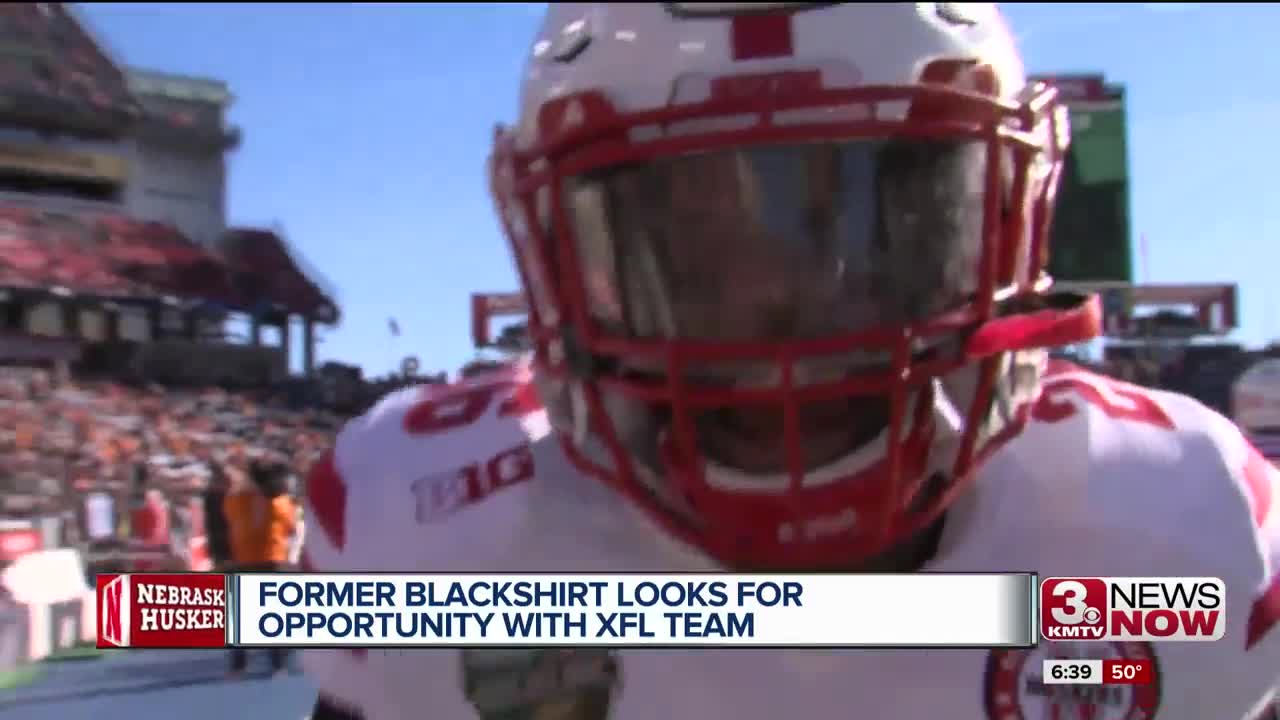 OMAHA, Neb. (KMTV) — Come 2020, professional football fans will have a new league to cheer for, the XFL.

On Tuesday and Wednesday of this week, nearly 1,000 former college football players will hope to hear their names called in the inaugural player draft. Former Nebraska safety Kieron Williams is one of those players.

"It's a big day," Williams said. "There's too many people depending on me. I have a mom, little brother, aunts, uncles and people that are along for this journey."

On Tuesday, Williams spent his morning training at a private facility in Omaha. For the last two years, the former Blackshirt has been grinding it out, not ready to give up on his dream of being a pro football player.

"There's not a day I haven't trained, there's not a day I haven't done something football related," Williams said. I'm in this gym four to five hours every day I wake up each day at 4 a.m. There's not a guy that's wired like me. They don't have time to do what I do. Anybody who has ever been on a journey has come to a point where it's hard and do I quit, do I turn around? I'm too far on the journey to turn around so I can't."

The energetic Williams had his best season with the Big Red in 2016, racking up 52 tackles and a team-high five interceptions.

But following the 2016 Music City Bowl loss to Tennessee everything changed for Williams as Mark Banker was out at defensive coordinator and replaced by Bob Diaco.

Williams said at times during his senior season he kept quiet because he didn't want fans to perceive that he was upset or mad at the coaching staff. Looking back two years later, he said the decrease in playing time taught him lessons in how to handle adversity.

"There was disappointment, anger, a feeling that I felt cheated and could've done more," Williams said. "It taught me that nobody will feel sorry for you and any day can be your last day of glory."

After graduating from Nebraska in January 2018, Williams hoped to catch on with an NFL team following the draft. However no team called and he has yet to latch on with an NFL franchise. Recently Williams drove 59 hours to Miami to meet with the Dolphins management.

"A guy that is willing to drive, look yourself in the eye and shake your hand, there's no telling where that can turn out," Williams said. "I wanted it to be something that other people look at and think it's insane. Look I'm just going to go to Miami. I'm going to represent myself. I'm going to look them in the eye and let them know what type of guy I am."

Williams said he got the opportunity to talk with Dolphins officials and said their reaction seemed promising.

"He told me that he would seriously continue to follow me and look at me as a player and that is all I could ask for," Williams said.

The former Husker did find a landing spot outside of the NFL. Earlier this year he was a member of the Arizona Hotshots as part of the upstart Alliance of American Football.

But in April, Williams plans for a career in the AAF were torn to pieces after the league filed for bankruptcy halfway through its inaugural season.

Williams showed enough in the AAF to get a tryout in the XFL and is hoping to get his named called in Wednesday's portion of the draft when the secondary players will be selected.

Williams ultimate goal is still to make an NFL roster, a dream he's had since he was four. But he hopes his story of perserverence will inspire Huskers fans to continue going after their dreams.

"There's people out there at their lowest of lows thinking they can't go anymore and they can look at someone like me and see they can go a little more," Williams said. "If there's anything that any person wants to do all it takes is that you believe in it and it doesn't matter what anybody else says."

Outside of football Williams is having success with his clothing line he created. He said if drafted he plans to wear number-27 in honor of Sam Foltz and Norman Taylor, a friend of his from home who broke his neck while in high school.

Watch Phil Bergman's story in the above video.