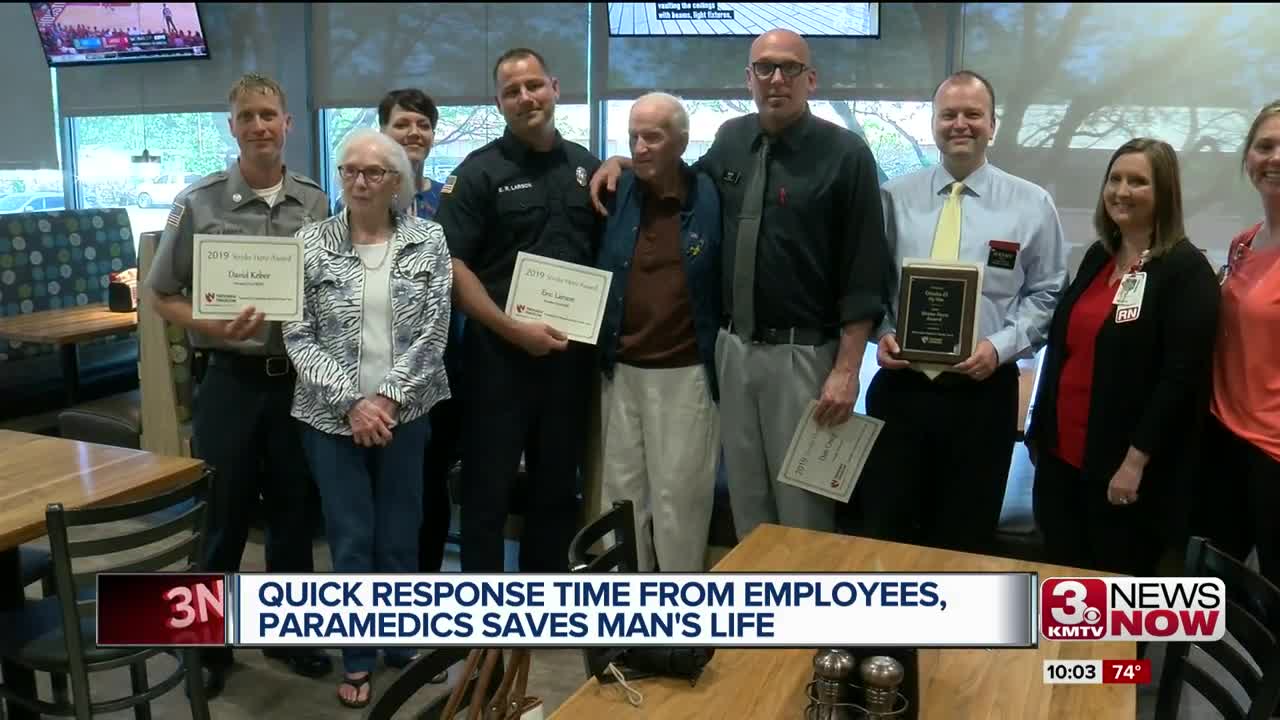 Employees from Hy-Vee, as well as paramedics with Omaha Fire, were recognized Tuesday for quickly responding when a man suffered a stroke inside the store.

"Just the way he landed and I tried talking to him and he wouldn't answer,” says Evelyn Spellman.

Hy-Vee employee Jamie Mengler noticed Ed hunched over. She promptly put him in a motorized cart while the store manager called 911.

"I was asking him questions, he wanted to answer but there was just nothing there,” says Mengler.
"I said to blink once, a good blink, if he could hear me and blinked really hard and starting tearing up and so you could tell that he wasn't there, you knew something wasn't right."

Ed wasn't right at all.

"We recognized immediately that he was having a stroke,” says Dave Keber, a paramedic that responded to the scene.

After checking him out more, it only looked worse.

"He was having one of the most severe strokes that you can have,” says Keber.

Ed went to Nebraska Medicine where they immediately gave him blood clot medication.

"You always feel like you can get up and walk out, but I really thought I could of,” says Ed.

A few days later, he was out of the hospital and now the 90-year-old is walking around perfectly fine.

But medical experts say his fate could have been much different.

The quick reaction from Hy-Vee employees, to the rapid response by the paramedics, to the fast diagnosis at Nebraska Medicine all combined to possibly save Ed's life

"Very unusual for all those factors to align and produce this outcome,
says Keber.

It didn't take long for Ed, a Hy-Vee regular, to come back into the store, and reunite with Jamie.

"I kept thinking about him the next few days and worried about him. Because I knew how serious his condition was and uh, it was just joy, yeah I'm so happy for them,” says Jamie Mengler.