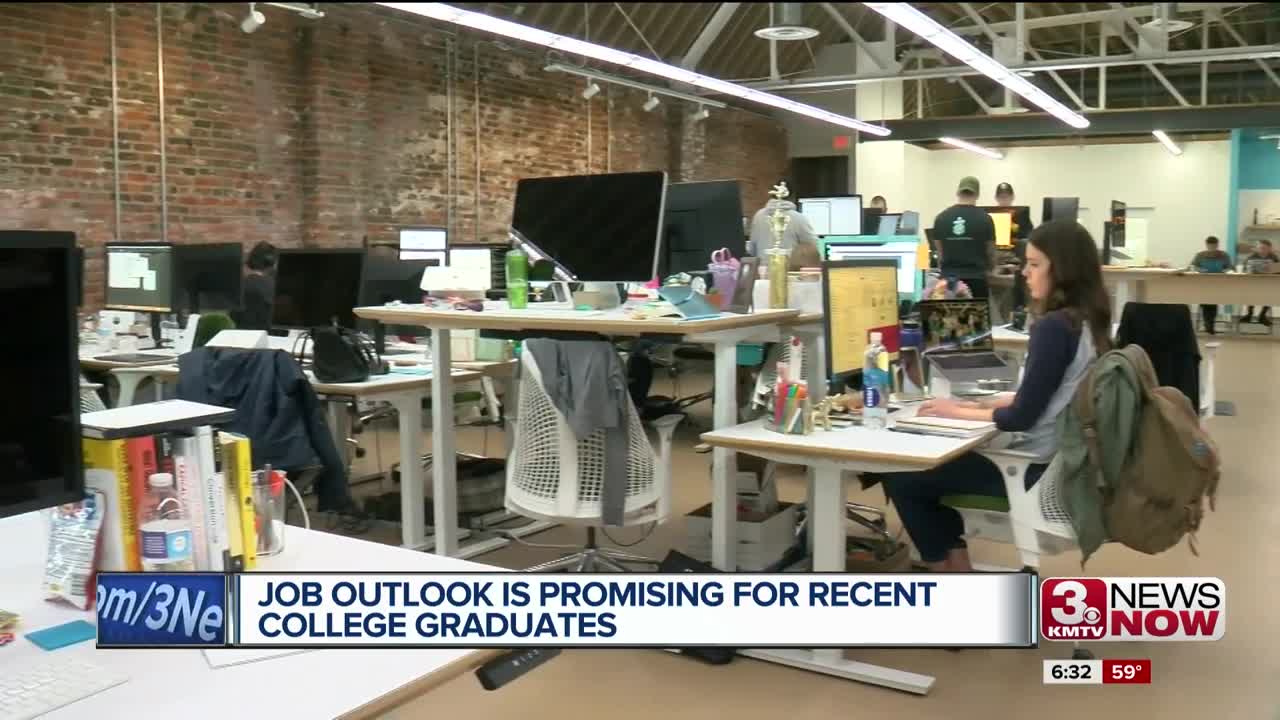 According to the Nebraska Department of Labor, unemployment rates are low at 3.7-percent in the U.S. and 2.8-percent in Nebraska and jobs are available at 10.6-percent higher levels than this time last year.

OMAHA, Neb. (KMTV) — With college graduations taking place this weekend across the country, the real fun begins for the graduates as they start job hunting.

It turns out 2019 is one of the best years for recent grads to find jobs as unemployment is low and jobs are readily available. As well, Omaha has been voted as one of the best places for millennials to find work.

For those graduating with tech and engineering degrees, they'll be in high demand by companies.

"There's only so many computer science grads," said Dan Houghton, the co-founder of Buildertrend, a major tech startup in Omaha. "Last stat I heard there was one position for every four openings so it's a competitive time."

As Buildertrend looks to expand to 500 employees and beyond, recruiting the best and brightest grads has become a major focus.

"Every company here in Omaha and across the state and the country are talking about the same thing that's talent and talent attraction," Houghton said. "I think that puts the employees and the people who are looking for new positions in the best possible spot they can be, especially if you're a college graduate."

"The job market for those entering is very favorable for all grads at UNO currently," said Sammi Kaiser, the director of UNO's Career Development Center. Kaiser said millennials are intrigued by jobs with startups and their backgrounds are what the companies are looking for.

"Quick studies so quick to train, maybe more adaptable to different environments to how a company may need to grow and flex to the needs going on," Kaiser said.

According to the Nebraska Department of Labor, unemployment rates are low at 3.7-percent in the U.S. and 2.8-percent in Nebraska and jobs are available at 10.6-percent higher levels than this time last year. On top of that, the department said there are 21,140 jobs available in Nebraska each year for the next seven years.

"We're hiring between 25-30 people a month and we're hiring people that are motivated, excited to come work at a new place" Houghton said. "If I was coming out of college it's a great time to look for work in a new career."

While many who work in Omaha already lived in the area or grew up in Nebraska, the companies say the city's reputation as an up and coming tech city is a easy draw when trying to recruit prospective employers.

"There's a great support structure here, there's near limitless resources," said Michael Struthers, the director of people operations at Flywheel, a WordPress hosting startup in Omaha. "You can care about what you do and make a name for yourself."

"I think as more people see the cost of living's solid, the opportunities solid, it will become an appealing place," said Houghton.

But in the mean time, it doesn't look like students will have any issue finding work come graduation.

"The needs are growing for employers," Kaiser said. "Now is the time to be looking."