Just like many 'suburbs' around the US, Sarpy County beginning to trend more Democratic 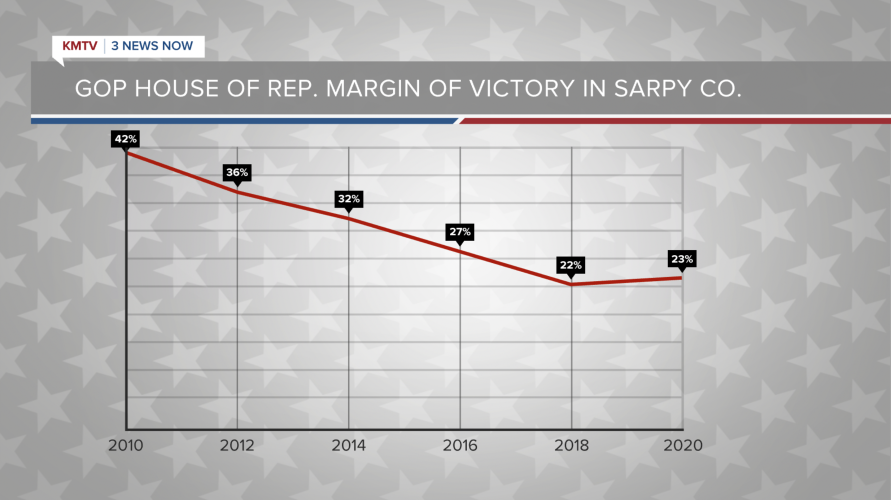 The margins in the presidential race were closer in Sarpy County than anytime since 1964. Democrats in the county say they working to keep to continue the trend in the suburbs.

OMAHA, Neb. (KMTV) — Over the last four years, we’ve seen suburbs across America trend from largely republican, to more moderate, if not democratic.

Sarpy County is a part of that, still voting Republican, but much less than in the past.

When George W. Bush won his re-election 16 years ago, Sarpy County voted for him by a 39 percent margin, more than the state as a whole.

But this year, it was much closer, with the Republican Donald Trump winning the county by just an 11 point margin. With the entire state voting for Trump by 19 percent.

On the House of Representatives level, since 2010, the Republican margin of victory has gone down almost 20 percent. Slowly going from 42 percent to 23 percent in just 10 years.

One reason? The metro suburbs are growing more diverse.

“With more Latino growth, some Black and Asian growth as well. So those different population groups all vote in slightly different ways and certain ones have more of a Democratic lean,” said David Drozd, a research coordinator at UNO's Center for Public Affairs.

He said, along with diversity, the county has lost military veterans.

“The area is becoming more educated, higher levels of having a bachelor's degree or more,” says Drozd.

Sarpy County Chair Charlene Ligon believes the young educated people moving to the county are the reason for the trends.

“Young people have a different perspective on what life should be like in America and they are not voting the same way their parents may have,” says Ligon

The demographic and voting trends we're seeing in Sarpy County are also happening in west Omaha.

Hibbing says on a national level, places like west Omaha, Papillion, Bellevue and La Vista are going to be where many national races are decided in the future.

“So that leaves the suburbs being pretty well balanced, maybe tilting a little bit Republican right now, but that could be changing because so many people of the country may live there, that’s going to be the key demographic,” says Hibbing.

So the open question remains, are the suburbs going to continue to trend blue, or is it a reaction to Donald Trump?

“That is the $64 question, everybody is trying to figure that out, especially the Republicans,” says Hibbing.

Ligon looks at the all-Republican Sarpy County Board of Commissioners, and she hopes the younger more diverse coalition that voted for Joe Biden, power Democrats to win county elections in the future, turning promise into actual power.

“We are attempting to have some Democratic influence in the county,” says Ligon.