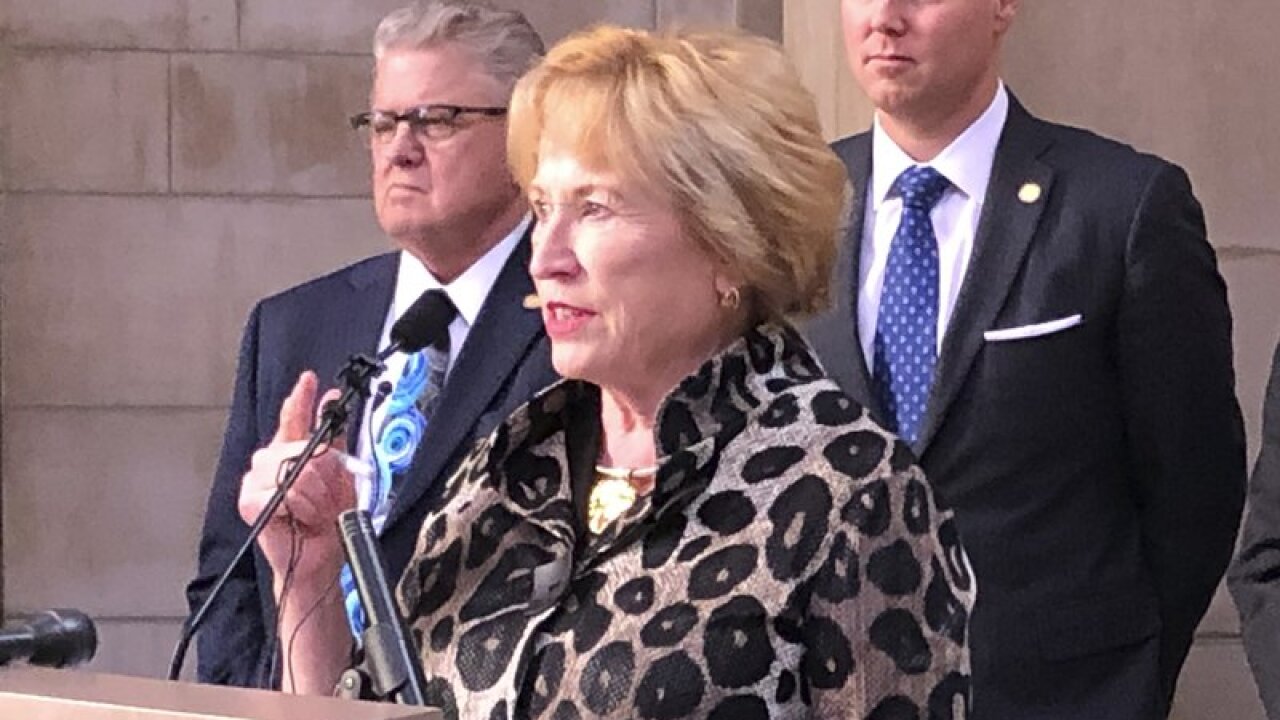 (Copyright 2020 The Associated Press. All rights reserved. This material may not be published, broadcast, rewritten or redistributed.)
State Sen. Lou Ann Linehan, chairwoman of the Nebraska Legislature&#39;s Revenue Committee, addresses reporters about a new property tax proposal, Tuesday, Jan. 14, 2020, at the state Capitol in Lincoln, Neb. The proposal is designed to lower property taxes while boosting aid for public schools. (AP Photo/Grant Schulte).

Six of the eight members of the Legislature’s Revenue Committee stood in favor of the bill, which would reduce the percentage of property value that school districts can tax. Schools that lose money would get compensated with an infusion of state aid to keep them whole, and smaller districts would see an increase.

“This is about getting property tax relief to Nebraskans without harming our schools,” Sen. Lou Ann Linehan, of Omaha, the committee chairwoman, said at a press conference to tout the bill.

Lawmakers haven’t yet taken a formal vote on the legislation, but getting enough support from within the committee is a major hurdle. The committee plans to hold a public hearing on the measure on Jan. 22.

Its prospects in the Legislature are still unclear, however, and it isn’t likely to sway activists who are gathering signatures for a November property tax ballot measure.

Linehan said the committee’s bill would result in an average property tax reduction of 13% to 15% after three years. The ballot measure would provide a state tax credit to 35% of a property owner’s tax bill, a roughly $1 billion proposal that opponents say would require the state to raise other taxes.

The bill could also face resistance from fast-growing Omaha-area schools that want to preserve their local tax base. Those schools educate the majority of Nebraska’s students and receive most of the state aid, but the proposal would provide a bigger increase for smaller, rural school districts that rely more heavily on property taxes paid by farmers and rural homeowners.

But Sen. Brett Lindstrom, of Omaha, who serves on the committee, said most constituents in his district have asked him to lower property taxes as their top priority.

“I don’t imagine I’ll get too much push-back from my constituents,” he said.

A Nebraska tax-policy think tank warned last week that the proposal could crowd out other state funding priorities, such as the prison system or reimbursement for companies that serve some Nebraska’s most vulnerable residents. The state’s recent uptick in revenue could also reverse itself, forcing lawmakers to make cuts, said Renee Fry, executive director of the OpenSky Policy Institute.

“They might have to undo it at some time,” Fry said.

Nebraska Farm Bureau President Steve Nelson, whose group has fought to lower property taxes, said the bill appears to help farmers and ranchers while ensuring adequate funding for schools. He said his organization still needed to review the bill before formally endorsing it.

“It’s a step in the right direction,” he said.