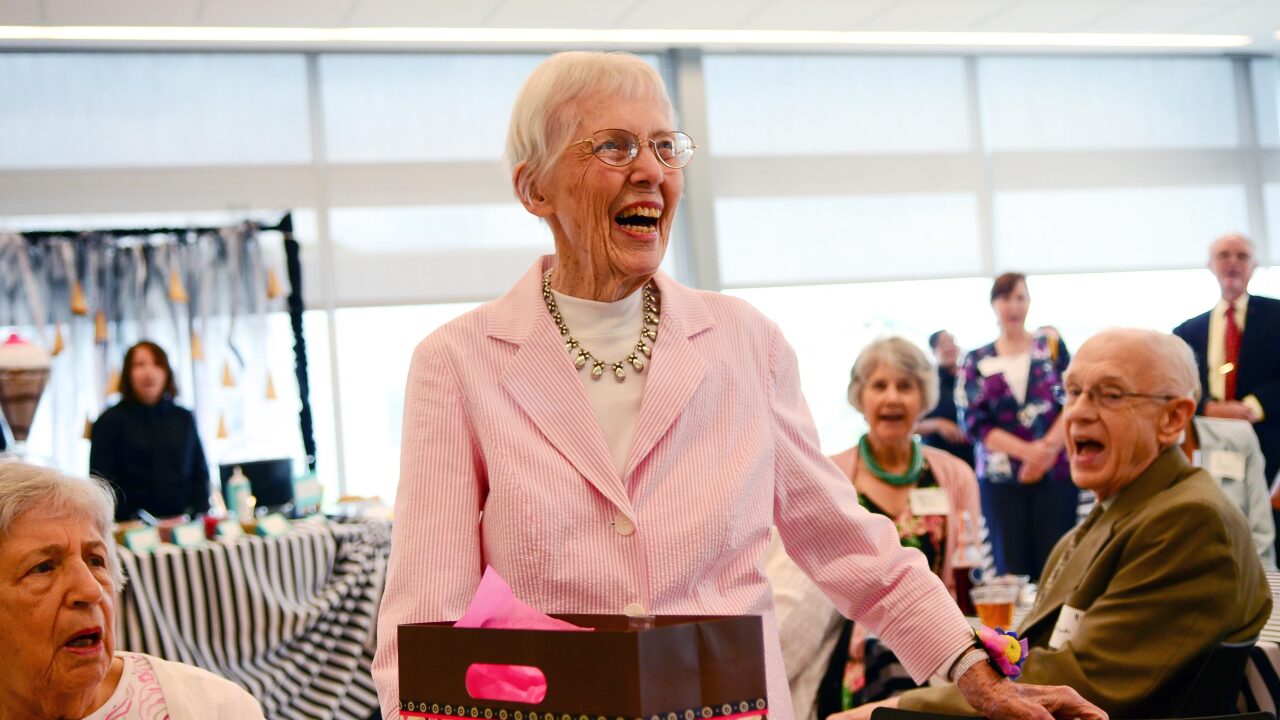 OMAHA, Neb. (KMTV) — The University of Nebraska Medical Center (UNMC) says that one of its most influential supporters has died.

According to a release from UNMC, Virginia Grissom passed away in an assisted living facility, five months short of her 100th birthday.

Grissom was the wife of the first full-time chair of the UNMC Department of Internal Medicine, Robert Grissom, M.D., and was said to have spent many hours in waiting rooms comforting families.

Together, the Grissoms were "philanthropic giants" in the community and for UNMC.

The family is requesting that any memorials being made on her behalf, be made to two causes close to her heart...the Girl Scouts, the Omaha Symphony and the University of Nebraska Foundation.

Along with her late physician husband, Grissoms are considered one of most important families in UNMC history

Virginia Grissom, the matriarch of one of the most important families in the history of the University of Nebraska Medical Center, died Feb. 26 at an assisted living facility in Omaha. She was 99 – less than five months short of her 100th birthday.

Grissom’s husband, Robert Grissom, M.D., was the first full-time chair of the UNMC Department of Internal Medicine from 1956-1970 and is credited with being one of the key leaders who raised the bar and set the course for making UNMC the world-class medical center it is today. Dr. Grissom died in 2009 at the age of 92.

Virginia played a key role in supporting her husband through her work with the Faculty Wives Club, in arranging social activities for the department and serving as a tireless volunteer for the medical center spending countless hours assisting families in the Surgery Waiting Room.

Together, the Grissoms – who first came to UNMC in 1953 – were philanthropic giants, contributing generously to their favorite programs including the McGoogan Library of Medicine, the UNMC Department of Internal Medicine, the Michael F. Sorrell Center for Health Science Education, the Truhlsen Eye Institute, the Weigel Williamson Center for Visual Rehabilitation, the College of Public Health, and the Interprofessional Academy of Educators.

“Virginia Grissom was the grande dame of UNMC. There will never be another to equal her. She was a legend in her own right,” said Michael Sorrell, M.D., who holds the title of the Robert L. Grissom, M.D., Professor of Medicine.

“She was a wonderful role model, who was years ahead of her time in everything,” said Nancy Grissom, the oldest of the Grissoms’ four children who now lives in Newton, Mass., and works in real estate.

A native of Springfield, Mass., Virginia Beal Grissom was a huge proponent of education. At a time when most women stayed home and raised their families, she earned a mathematics degree from Mount Holyoke College, then went on to get a master’s degree at the University of Wisconsin and was just a dissertation short of having her Ph.D. As an undergraduate, she was a member of the Phi Beta Kappa Honor Society.

The Grissoms met in Wisconsin when Robert was stationed there as a physician in the military during World War II. They married in 1944 and had three daughters and a son during their 64-year union.

Both Grissoms were fitness buffs. Robert was a runner, and Virginia loved to swim, play golf and take long walks – even after having both her hips replaced when she was in her 80s and 90s. Virginia drove until she was 97, Nancy Grissom said, and had no major health issues at the time of her death other than short-term memory loss.

She held a volunteer position as board president of the Girl Scouts in Omaha. During her tenure, Grissom used to take scouts to Camp Wa-Shawtee in southwest Iowa. A lake at the camp was named Lake Virginia in her honor. As a youth in the Girl Scouts, Virginia got to row across a lake in the same canoe with Eleanor Roosevelt, the first lady of the United States.

She also started playing the drums in the drum and bugle corps with the Girl Scouts in Springfield, Mass., and the unit won several contests. This was a hobby she continued as an adult, as she played kettle drums at church music events and even participated in a talent show a few years ago playing a drum set.

As the story goes, Virginia once encountered a rattlesnake at a Girl Scout camp, and instead of being scared away, she grabbed an axe and chopped off the snake’s head.

"This was amazing to me,” said Meg Johnson, assistant vice president, UNMC development, University of Nebraska Foundation.” Here’s this small-statured woman taking on a snake – it speaks to who she was at her core – strong, smart and determined.”

“She was a no-nonsense kind of person, fiercely independent,” Nancy Grissom said. “If her children asked her to do something, she would say, ‘You know how to do it – do it yourself.’”

“She was not afraid to take on any task,” said Carol Grissom, a conservator at the Smithsonian Institution in Washington, D.C. “I remember her building a patio and surrounding wall largely from old bricks being extracted from one of the university’s brick roads.

“She also could be a lot of fun. I don’t remember other mothers going sledding with their kids.”

The Grissoms’ youngest child, Tim, a radiologist at Parkview Regional Medical Center in Fort Wayne, Ind., summarized his mother’s life by saying, “She lived a full life of 99 years – a beautiful, intelligent woman, living and learning from the ‘depression’ years, marrying my father, devoting her life to raising her children and serving the Omaha community.”

She is survived by her four children – Nancy, Carol, Leslie, (a pediatric radiologist at the Alfred I. duPont Hospital for Children in Wilmington, Del.); and Tim; five grandchildren; and four great grandchildren.

The family plans to hold a memorial service in Omaha later this spring. The family requests that memorials be made to the Girl Scouts, the Omaha Symphony and the University of Nebraska Foundation.

What others are saying:

“Virginia Grissom has been an enduring figure in the College of Medicine and a link to the 1950s when it was a very different place. When the Grissoms were recruited from the University of Illinois, there had never been a full-time, salaried chair of internal medicine in the department's 70 plus years of history.

“Virginia worked on arranging the social support activities such as the Faculty Wives Club and entertaining the volunteer faculty members. She was a strong leader and a loyal advocate for Bob and for the department of medicine. She was very courteous, but did not suffer fools gladly. She was a bright and delightful person to talk with and always gracious to us as students, and later, as junior faculty.

“During Bob Grissom's chairmanship of internal medicine, though her support and energy, she made many positive improvements in the social organization of the department and will be greatly missed.”

“Virginia was one of the most beloved members of the Girl Scout family, and she will be greatly missed. For decades, she was a leader among leaders from camping to traveling, creating artwork to stellar cookie sales. She had an unwavering belief that girls can do anything. Her enthusiasm for Girl Scouting impacted hundreds of girls and women. Virginia was a true role model and inspiration, who made the world a better place.”

“Virginia and Bob Grissom lived for decades in the neighborhood where Dan Schafer and I live. Always avid exercisers, my fondest memory is having them interrupt one of their vigorous walks through the neighborhood to join Dan and me on our porch for a glass of punch. Years later, Virginia would support her commitment to the importance of exercise in health with a series of grants to EngAge Wellness.

“Mrs. Grissom was a no-nonsense person with clear opinions, and it was refreshing to know that you could be certain that she would let you know where she stood on an issue. She was a great lady who was instrumental in assisting her husband to build the Department of Internal Medicine that we know today. We were privileged to attend her 95th birthday party and saddened to miss her 100th planned for this summer.”

“Virginia Grissom epitomized the ‘can do’ spirit of UNMC for over 50 years. She saw and contributed to the evolution of the Department of Internal Medicine as it grew into the strong academic department that it is today. Her pride in UNMC was obvious. She will be greatly missed.”

“Virginia was an incredibly loyal supporter of UNMC and the department of internal medicine. She was a wonderful partner to Dr. Grissom, and together they chose to provide ongoing support for internal medicine resident education. As she aged, she became a ‘poster child’ for the geriatrics program and added her support to that work. She was a remarkable woman.”

“Virginia Grissom was a friend to students, residents, and faculty alike and she continued to support student needs throughout her life. When I was a student, Dr. Grissom expected the male medical students to wear white shirts with a tie – no colored shirts. The students asked for Mrs. Grissom's help, and she bought colored shirts for Dr. Grissom and that ended the colored shirt ban.”

“Virginia Grissom was a gracious lady and loved by all. She was a strong supporter of the Center for Healthy Aging on the medical center campus and also contributed to the McGoogan Library. She was a regular attendee at the Omaha Symphony Concert Series and the Chamber Orchestra Concerts. We would often visit with her during intermission.”

“Virginia led a remarkable life. She traveled, raised a family, was quick with a smile, and was a vibrant part of the UNMC family. Through her philanthropy, she touched so many areas of campus. Through her friendship, she touched all of our hearts.

“Virginia was truly an icon supporting the College of Medicine for over 50 years – well into her 90s. She was active in the community and academic activities, which benefited the institution. She will be missed.”