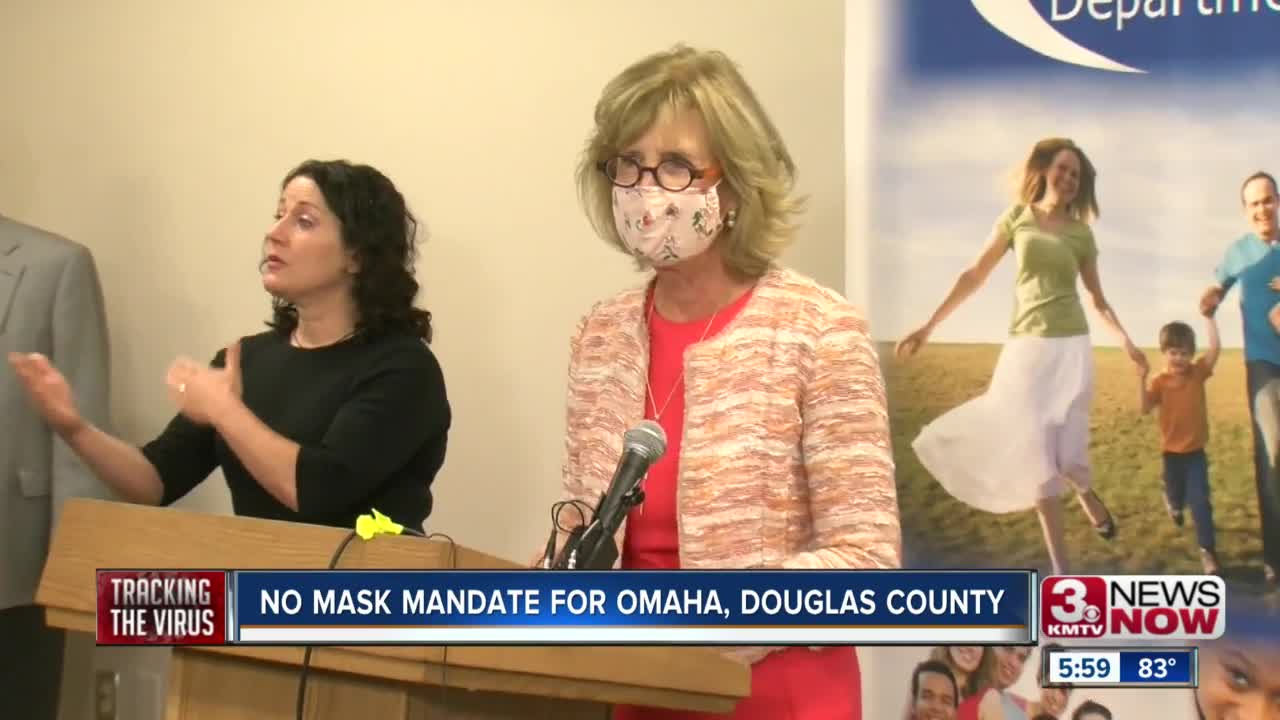 OMAHA, Neb. (KMTV) — Douglas County Health Director Dr. Adi Pour said on Friday that she will not be mandating masks in Douglas County.

The move came days after the county Board of Health unanimously passed a mask mandate. It was slated to go into effect in Omaha on August 3 and later on in the rest of the county.

Pour said city and county attorneys clashed with Nebraska’s Attorney General as to whether she legally could issue a mask mandate.

While not making it law at this time, she and other medical professionals said people should continue to wash their hands, social distance and wear masks to crush the spread of COVID-19.

Omaha Mayor Jean Stothert said she is also on board with continuing to encourage safety measures but that does not want a law in place that would compel police to act against those not wearing them.

Stothert said she is making a recommendation to Omaha’s City Council that a resolution is passed, urging people to wear them but that it would be more of a strong message about doing so without any legal ramifications for those who don’t.

When pressed on the matter, and whether she and Pour may decide to take legal action and pursue a mandate, Stothert said it’s not off the table but they didn’t want to engage in a legal battle which could take months or years when so much is already going on.

Dr. Gary Anthone, Nebraska Director of Public Health, says Nebraskans did a good job of flattening the curve in April but people still need to wear a mask, wash your hands, and keep a distance.

When asked about Lincoln’s recent mask mandate, Pour said the two cities are different when it comes to the laws that govern them. Lincoln provides for such a mandate due to a caveat in the city’s code, said Pour.

Stothert and Pour both said the decision was based on dealings with the Attorney General's office and did not indicate Gov. Pete Ricketts had any direct input. Ricketts has been a vocal opponent of mask mandates in the state.

The Attorney General's office says their role is to evaluate the law, not create or direct public health policy.

Dr. Pour says for now she has to trust everyone to do the right thing.

"Please think of your family, your neighbors, and people around you," she said.

.@HealthDouglasCo Director Dr. Adi Pour says she gotten lots of support for a mask mandate but she says there has been legal issues to mandate masks.

Dr. Pour says for now she has to trust everyone to do the right thing.

"Please think of your family, your neighbors, and people around you."