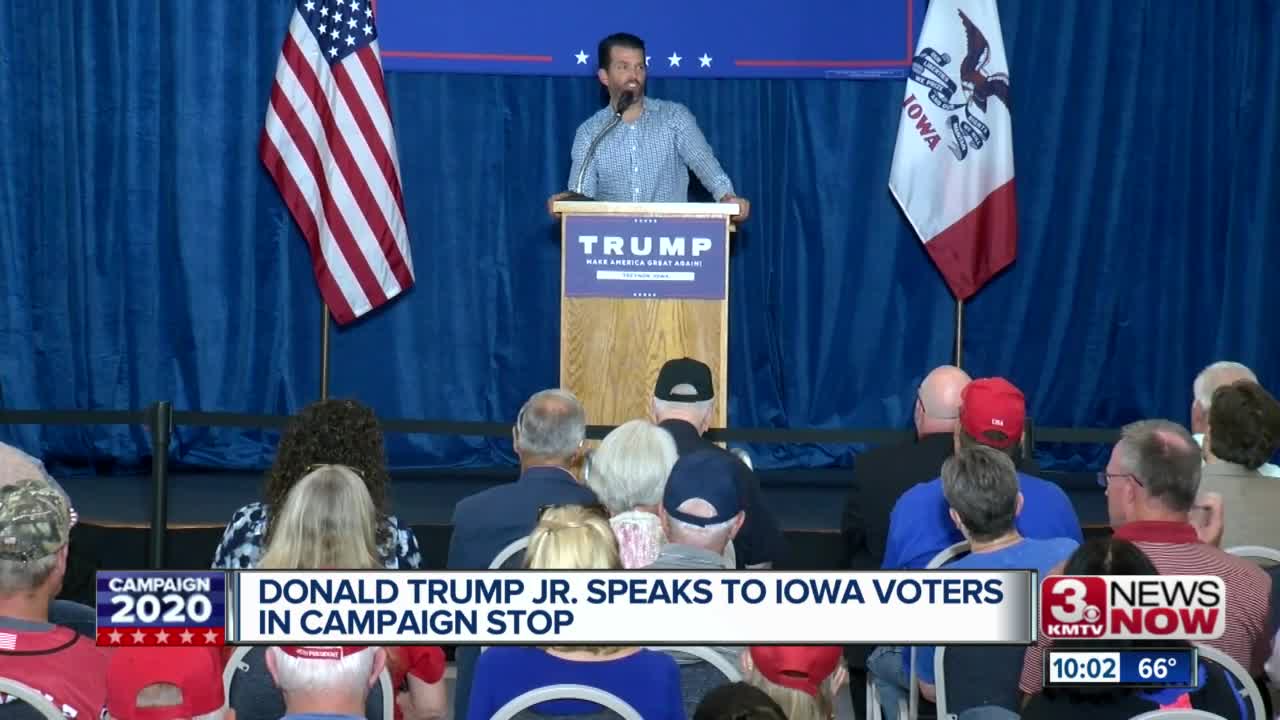 TREYNOR, Iowa (KMTV) — Donald Trump Jr. spoke with voters in Treynor, Iowa, hoping to solidify another four years in office for his family.

It was a sea of red hats and limited face masks in a state that has a COVID-19 positivity rate of 10.6%.

Cleo Wooten drove from Lincoln, escaping the city under a mandatory mask ordinance.

“I’m not convinced that the coronavirus is worse than the flu,” Wooten said. “I am enjoying a little bit of freedom now without the masks and not seeing the numbers of people that are dying really raise up.”

Trump Junior spent very little time talking about the virus, mainly focusing on what he says is bias in the mainstream media, Biden’s ability to run a country and the current unrest in America.

“You think defunding the police is going to fix that problem, or do you think it forces good cops with experience into retirement while creating a void for younger-immature cops with no experience to fill that gap,” Trump Jr. said.

The Trump campaign is running on law and order, something many supporters align with.

“I see President Donald Trump as a beacon of hope for law enforcement in this community, not only in Nebraska, but across the United States,” Turner said.

Among the many voters we talked with, there was one with plenty life experience.

We spoke with a 94-year-old WWII veteran, Roland Burger, about why Donald Trump is his candidate in 2020, asking him if he had any advice for American voters.

“You got to keep an open mind and you know what you believe in and who you believe in,” Burger said. “I’m in the American Legion and our motto is for God and country. The only way to get the country you want is get out and vote and vote for the person you know is right.”

“After Donald Trump lied to the American people by downplaying COVID-19, no member of the Trump family or the president's campaign has any credibility to talk honestly with voters about the issues we're facing, from healthcare to unemployment. President Trump's failure to contain the virus is leading to growing numbers of COVID-19 infections while thousands file for unemployment. Only Joe Biden and Kamala Harris have the integrity and a real plan to defeat the virus and build our country back better than before.”