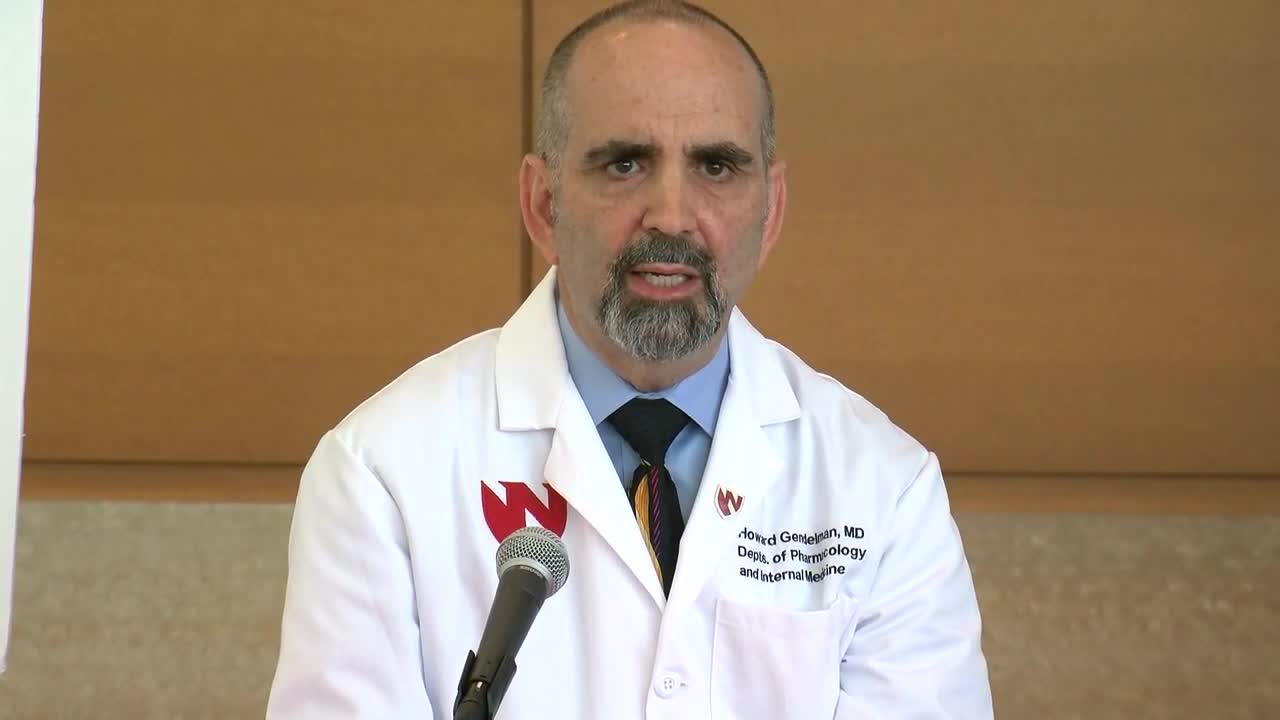 Today researchers at UNMC shared their groundbreaking research findings into a cure for HIV. 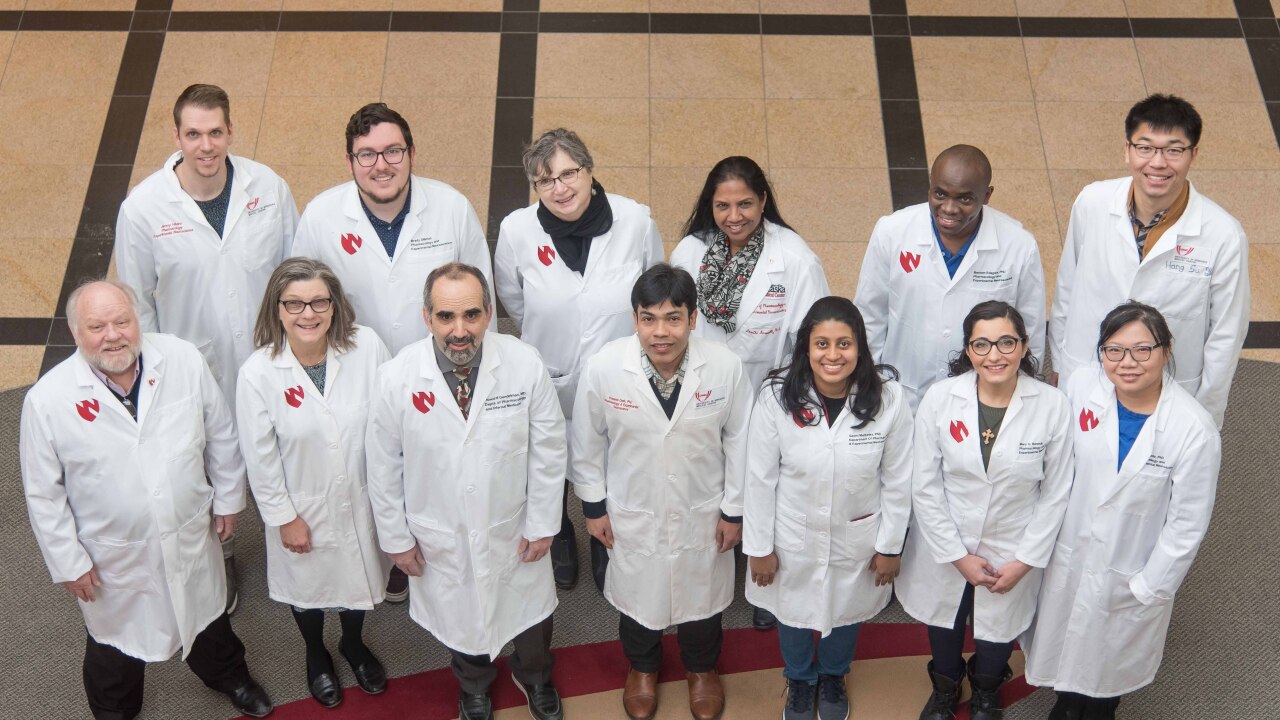 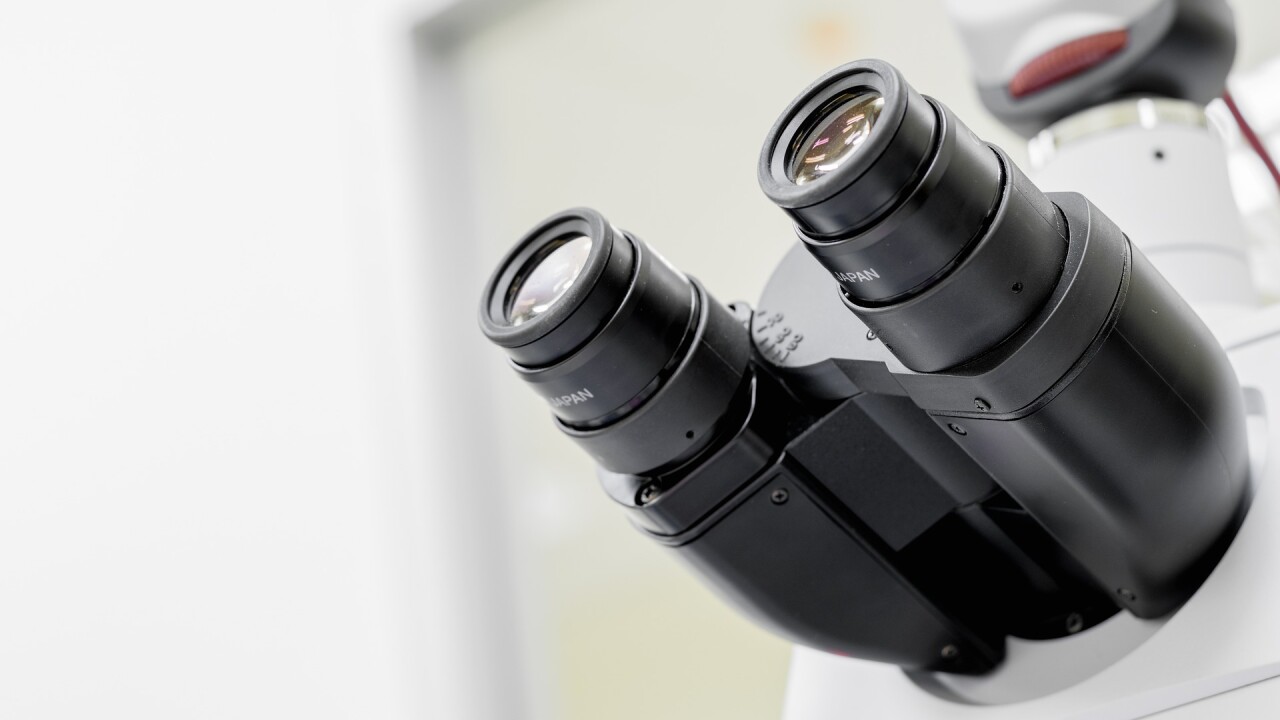 OMAHA, Neb. (KMTV) — Today the University of Nebraska Medical Center (UNMC) shared their findings from a groundbreaking research project which they say could lead to a possible cure for HIV in humans. They say they have managed to eliminate HIV in animal subjects.

UNMC officials say HIV in humans could be eliminated with two injections based on their research which was carried out in mice. They say there's still a lot of work to do but their findings are promising.

The project was carried out in a collaboration, lasting several years, with the Lewis Katz School of Medicine at Temple University.

Researchers have been able to eliminate HIV from an animal at @unmc. “We’re celebrating the idea that HIV has the potential to be completely eliminated.” pic.twitter.com/eAAHDTW2Ej

“The notion of taking pills every day may be eliminated. It is realistically possible that this [HIV] can be eliminated by two sepperate injections.” @unmc @3NewsNowOmaha pic.twitter.com/fFvqhlFIIF

UNMC's full release about the project:

In a major collaborative effort, researchers at the University of Nebraska Medical Center (UNMC) and the Lewis Katz School of Medicine at Temple University (LKSOM) have for the first time eliminated replication-competent HIV-1 DNA – the virus responsible for AIDS – from the genomes of living animals. The study, reported online July 2 in the journal Nature Communications, marks a critical step toward the development of a possible cure for human HIV infection.


“This achievement could not have been possible without an extraordinary team effort that included virologists, immunologists, molecular biologists, pharmacologists, and pharmaceutical experts,” said Howard Gendelman, M.D., Margaret R. Larson Professor of Infectious Diseases and Internal Medicine, chair of the Department of Pharmacology and Experimental Neuroscience and director of the Center for Neurodegenerative Diseases at UNMC. “Only by pooling our resources together were we able to make this groundbreaking discovery.”


“Our study shows that treatment to suppress HIV replication and gene editing therapy, when given sequentially, can eliminate HIV from cells and organs of infected animals,” said Kamel Khalili, Ph.D., Laura H. Carnell Professor and chair of the Department of Neuroscience, director of the Center for Neurovirology, and director of the Comprehensive NeuroAIDS Center at LKSOM.


Drs. Gendelman and Khalili were senior investigators on the new study.


Current HIV treatment centers on the use of antiretroviral therapy (ART). ART suppresses HIV replication but does not eliminate the virus from the body. Therefore, ART is not a cure for HIV, and it requires lifelong use. If it is stopped, HIV rebounds, renewing replication and fueling the development of AIDS. HIV rebound is directly attributed to the ability of the virus to integrate its DNA sequence into the genomes of cells in the immune system, where it lies dormant and beyond the reach of antiretroviral drugs.


For the present study, Dr. Gendelman and his team led by Prasanta Dash, Ph.D., instructor of pharmacology, combined its LASER ART strategy with the gene editing system.


LASER ART targets viral sanctuaries and maintains HIV replication at low levels for extended periods of time, reducing the frequency of ART administration. The long-lasting medications were made possible by pharmacological changes in the chemical structure of the antiretroviral drugs. The modified drug was packaged into nanocrystals, which readily distribute to tissues where HIV is likely to be lying dormant. From there, the nanocrystals, stored within cells for weeks, slowly release the drug.

To test their idea, the researchers used mice engineered to produce human T cells susceptible to HIV infection, permitting long-term viral infection and ART-induced latency. Once infection was established, mice were treated with LASER ART and subsequently with CRISPR-Cas9. At the end of the treatment period, mice were examined for viral load. Analyses revealed complete elimination of HIV DNA in about one-third of HIV-infected mice.

“The big message of this work is that it takes both CRISPR-Cas9 and virus suppression through a method such as LASER ART, administered together, to produce a cure for HIV infection,” Drs. Gendelman and Khalili said in a shared statement. “We now have a clear path to move ahead to trials in non-human primates and possibly clinical trials in human patients within the year.”

“The ability to excise HIV-1 DNA from the genomes of infected animals depends on LASER ART’s abilities to maximally restrict ongoing infection. This concept of combining both modalities provides a pathway forward to future studies in humans,” Dr. Gendelman said.


What others are saying

“In my view, this is the most interesting and important therapy-related research advance I have seen in many, many years. Congratulations to the authors.”

Robert Gallo, M.D., co-founder and director, Institute of Human Virology at the University of Maryland School of Medicine and The Homer & Martha Gudelsky Distinguished Professor in Medicine and scientific director of the Global Virus Network. In 1984, Dr. Gallo co-discovered HIV as the cause of AIDS.

In addition to Drs. Gendelman, Edagwa and Dash, the UNMC research team included:


Department of Pharmacology and Experimental Neuroscience

The research was supported in part by grants awarded by the National Institutes of Health to Temple University and to UNMC, including:

Dr. Khalili is a named inventor on patents that cover the CRISPR-Cas9 system viral gene editing technology. He also is co-founder, scientific advisor, and has received equity and monetary compensation from Excision BioTherapeutics, a biotech start-up which has licensed the viral gene editing technology from Temple University for commercial development and clinical trials.

Drs. Gendelman and Edagwa are named inventors on patents that cover the LASER ART technology. Dr. Gendelman also is the founder and chief scientific officer of Brain First, Inc.

Drs. Khalili and Gendelman have not received financial compensation from any other third parties for any aspects of this published work.


About UNMC and its clinical partner, Nebraska Medicine

The University of Nebraska Medical Center (UNMC) is committed to the education of a 21st century health care work force, to finding cures and treatments for devastating diseases, to providing the best care for patients, and to serving the state and its communities through award-winning outreach. UNMC is one of four campuses of the University of Nebraska and the state’s only public academic health science center. Led by Chancellor Jeffrey P. Gold, M.D., UNMC has six colleges and two institutes, and serves more than 3,900 students (at five campuses throughout the state) in more than two dozen programs. Along with its primary clinical partner, Nebraska Medicine, UNMC has a $4.8 billion economic impact annually on Nebraska.

UNMC and Nebraska Medical Center are home to one of the nation's few dedicated biocontainment units. Since caring for three patients from the 2014 Ebola outbreak in Africa, UNMC/Nebraska Medical Center have taken a leading role in training health care workers across the U.S. and around the world in dealing with infectious diseases such as Ebola.

The Fred & Pamela Buffett Cancer Center, which opened in 2017, is shaping cancer care, research and education in Nebraska, the region and the world. The center offers personalized care to patients — based on the latest scientific research — in one facility.

TUHS is affiliated with the Lewis Katz School of Medicine at Temple University, and Temple University Physicians, which is Temple Health’s physician practice plan comprised of more than 500 full-time and part-time academic physicians in 20 clinical departments.