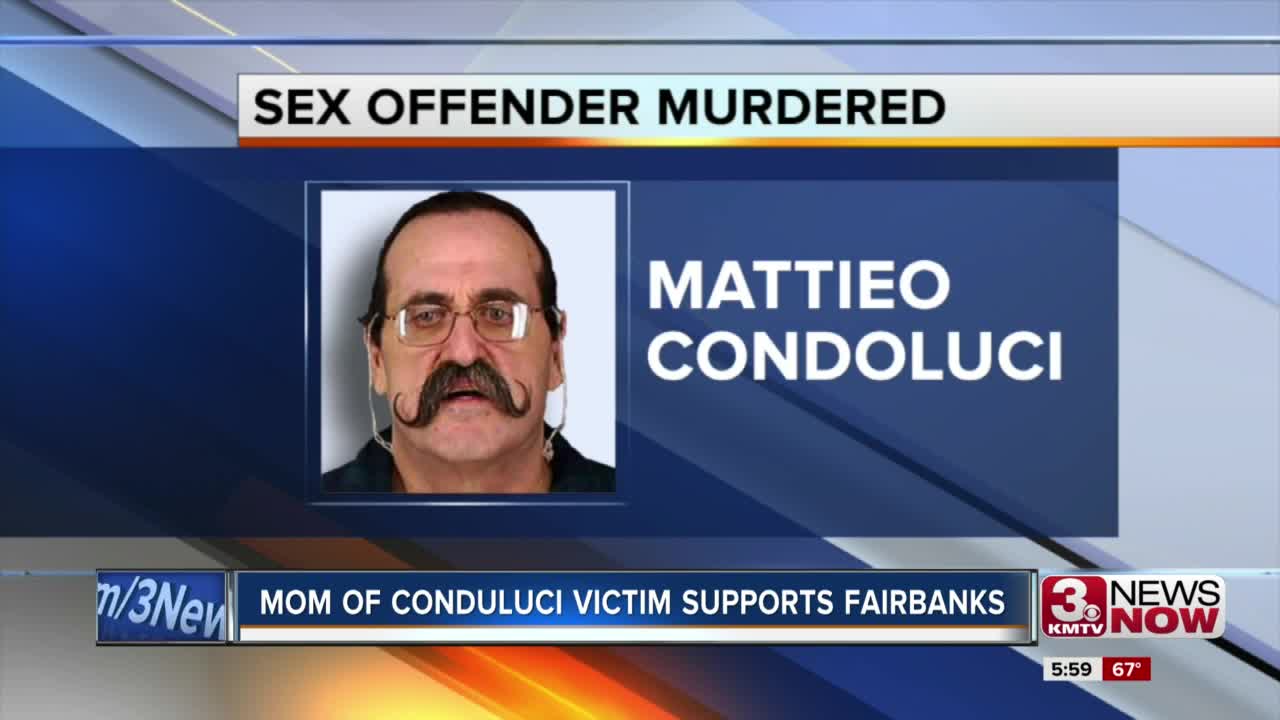 Why she's supporting the shooter and says he needs to get help.

OMAHA, Neb. (KMTV) — The mother of one of Mattieo Condoluci’s victims says she was elated to hear that he was dead, but didn’t want someone to see her Facebook page and go out and murder him.

James Fairbanks, 43, is charged with first degree murder and is being held without bond at the Douglas County Jail. He’s accused of killing Sex Offender Mattieo Condoluci, 64, in his home on May 14.

Prosecutors say Fairbanks sent an email to KMTV and other media outlets confessing to killing Condoluci because he knew his background and had to stop him from doing it again. The email also mentioned he saw a “Mattieo Condoluci Predator” Facebook group set up by Laura Smith, the mother of one of his victim’s. Smith son was sexually assaulted as a child by Condoluci in Florida in 1993.

She says she didn’t set up the page to have anyone kill him but was relieved he’s dead.

DIGITAL EXTRA: Hear from Laura Smith, mother of one of Condoluci's victims

“I struggled so many years everyday almost three decades. There wasn’t a day that went by that I didn’t think about what he was possibly doing, not possibly doing, I knew in my heart he would be doing to other children whose lives he’d be destroying,” Smith explained.

Condoluci was also convicted of sexually assaulting a child in Sarpy County in 2006. He served less than 2 years of a 5 year prison sentence.

The email describes a man who had worked with abused children for years, and had seen how much they can be traumatized.

Smith has changed the name of the Facebook group to “Free James Fairbanks.” She’s supporting him in his efforts forward and think he needs mental help right now.

“So for me my thing would’ve been he should not be in jail, at least not right then, he should’ve been brought to a hospital because now I feel like he’s sitting in jail and if it is PTSD we could lose another life over this and I hate to see that happen,” Smith explained.

Fairbank's Attorney Steve Lefler says in general he does feel better having a client mentally evaluated. He adds that $1,200 has been added to Fairbanks’ jail account by people that he doesn’t know who support him.