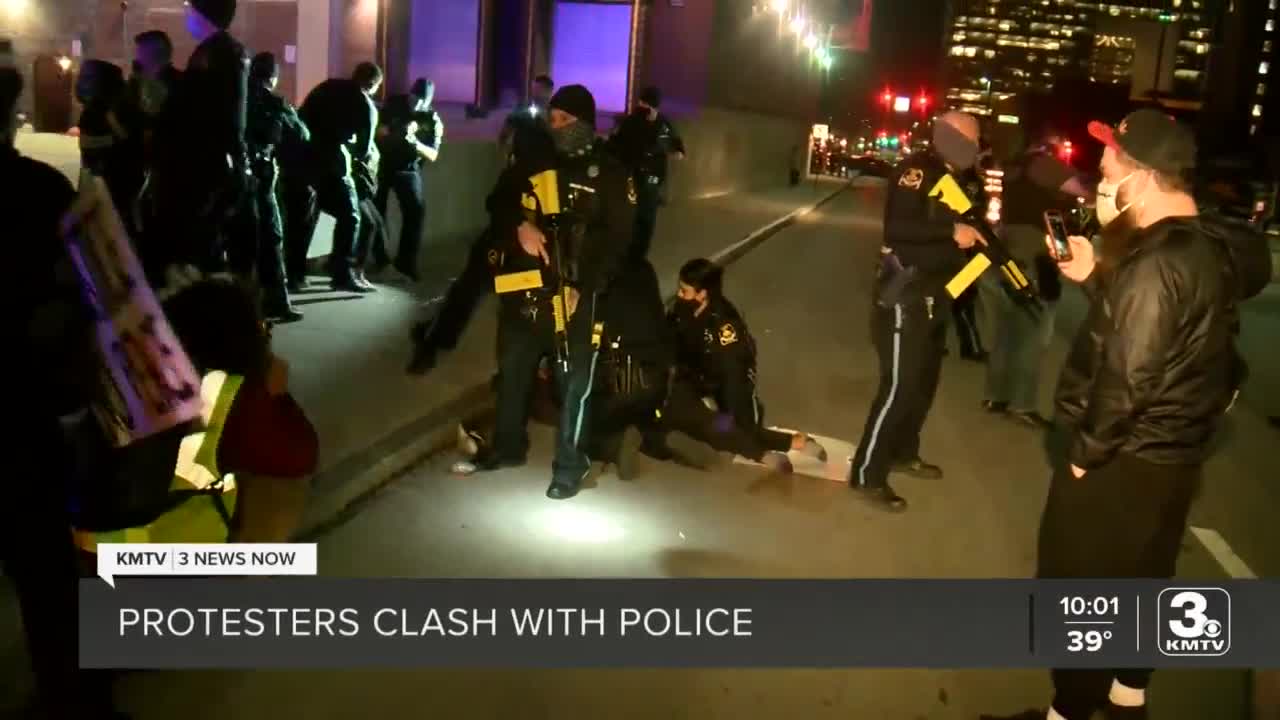 On Thursday, November 19, 2020, at 7:27 p.m., Uniformed Omaha Police Officers conducted a traffic stop on a vehicle at 27th and Harrison Street. As the officers were getting out of their marked patrol car, their Body Worn Cameras (BWC) captured the officers yelling "stop reaching!" The backseat passenger, later identified as Kenneth JONES, can be seen moving around as the officers walked towards the car. The officers yelled, "everybody, hands up" as they walked to the vehicle. There were four individuals in the car, and everyone but JONES complied by putting their hands outside the car windows. The officers repeated three times for everyone to put their hands up. The officer on the driver's side tried to open JONES' door several times while yelling at him to "open the door!" The officer used his flashlight to break out the car window to get the door opened. Once the door was opened, the officer yelled to JONES to "get out of the car!" The officer reached in to grab JONES, just as JONES turned and began moving towards the passenger side of the vehicle. BWC shows JONES continued to pull away from the officers as they pull him from the vehicle.

The cruiser camera shows the officers struggling to get JONES from the vehicle. Once JONES is out of the car, an officer is heard saying, "keep your hands where I can see them!" The officer then says, "Watch his right hand! He's digging! He's digging! He's got a gun! He's got a gun!" The officer yelled "Gun! Gun! Gun!" Seconds later, four shots are fired. JONES fell to the ground and continued moving as the officers yelled for him to "show his hands." One of the officers contacted dispatch, telling them of the shots fired, and requested a squad to their location. The officers then begin performing CPR on JONES. A loaded Springfield .45 caliber handgun, with a round in the chamber, was found on the ground, directly underneath JONES. A squad transported JONES to the University of Nebraska Medical Center Hospital, where he died from his injuries.

Detectives on the Officer Involved Investigation Team interviewed the passengers in the vehicle, who all said they heard the officers giving loud verbal commands to show their hands. One of the witnesses said they saw that JONES was not complying with the officer's orders to show his hands. None of the passengers in the vehicle reportedly knew of JONES having a gun on his person.

Both involved officers were wearing body-worn cameras, which were activated and recorded footage of the incident. One of the BWCs became dislodged during the struggle and did not capture the entire event on video, but did capture the entirety on audio. The BWC of the officer that discharged his weapon did capture the entire event on audio and video. The cruiser video only captured the beginning portion of the incident because the struggle took the officers from camera view, but it did remain on the entire time. The Douglas County Attorney was briefed and responded to the scene.

In accordance with the Nebraska State Patrol agreement, their investigators are assisting the Omaha Police Officer-Involved Investigations Team. The autopsy is scheduled for today, Friday, November 20, 2020.

The involved officers have been placed on Administrative Leave, per departmental policy. Forensic firearms examinations will be completed as part of this investigation. The investigation is ongoing, including interviewing both officers and conducting ballistic testing. Only one officer fired their duty weapon. The officer's duty weapon was taken into evidence and will be a part of the ballistic testing. The handgun that was recovered from the scene will be traced through the ATF database.

Per State Statute, the case will be presented to a Grand Jury once the investigation is completed. Any additional information will be released by the Omaha Police Department as it becomes available.

We would like to express our condolences to the family and friends of Kenneth Jones and the rest of the community that are affected by this incident. We are committed to conducting a thorough investigation and providing the public with complete details. The investigation is progressing and we ask for patience until it is complete. We will keep the public updated as additional information is verified. –Chief Schmaderer

On Friday, during a press conference regarding city's transition to a new solid waste contractor, Mayor Stothert provided an update on Thursday's fatal officer-involved shooting.

The mayor said there is body cam footage of the incident and it is currently being investigated by the Omaha Police Department with the guidance of Police Chief Schmaderer. In addition to that footage there are also witnesses to the shooting.

Following an investigation by law enforcement, a grand jury will be called in to review the evidence and determine whether the officers will be indicted and stand trial for any criminal charges. Stothert said the evidence, including the body cam footage, may eventually be release once it's reviewed.

Stothert called the shooting tragic and offered condolences to the deceased man's family. She said she hopes the incident will not lead to civil unrest.

The officers involved have been with the department since about 2016. Both have been put on paid-administrative leave during the investigation.

Due to the ongoing pandemic, the grand jury's investigation may not happen for months Stothert said.

The Omaha Police Department should provide a statement later today the mayor said.

On Thursday, the Omaha Police Department said a routine traffic stop at 27th and Harrison ended in a 35-year-old Black man dead from gunshot wounds.

The man was struck and taken to Nebraska Medicine where he died from his injuries. A police department spokesman said they believe only one officer discharged his weapon, but they are unsure exactly how many shots were fired.

KMTV will update the website as the situation develops.