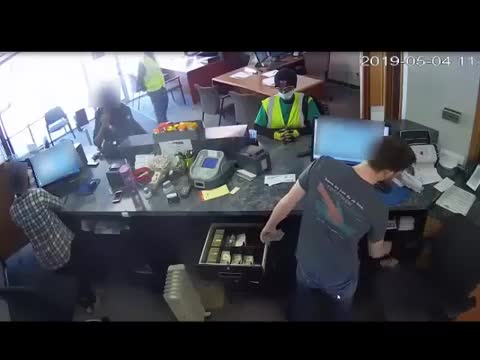 Police are looking for two suspects who robbed a bank at 8030 Blondo Street.

Officers responded to the bank at 8073 Blondo St. at 11:19 a.m., where employees reported that a black male and a black female entered the bank and approached an employee.

The black female handed the teller a note demanding money, a press release from OPD says. The suspects took cash and fled the bank.

The female suspect is described as 5'3' in her mid-20's. She had a black stocking cap with a red "N", silver safety glasses, a surgical mask, a neon yellow vest, green t-shirt, blue jeans, yellow work boots and yellow/black gloves.

The male suspect is believed to be in his mid-30's and 5'7". He had on a red and green stocking cap, sunglasses, a surgical mask, a neon yellow vest, blue jeans, black shoes and black gloves.

Investigation into the robbery is ongoing. Anyone with information is urged to call Crime Stoppers at (402)-444-STOP.

Tips leading to a bank robbery arrest are eligible for a reward of $10,000.