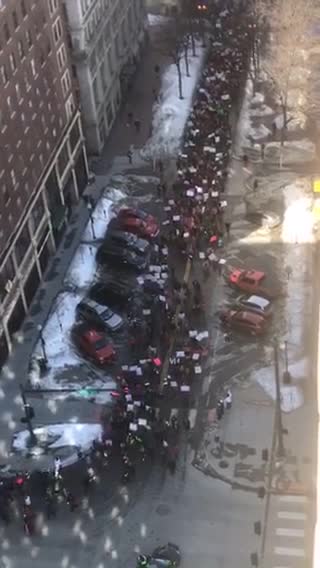 The event was moved to Sunday to coincide with the weekend of International Women's Day.

Marchers met at City Hall, listening to speeches from various members of the community.

Elders lead participants into the march down Farnam and Harney streets following an opening prayer from Glenna Slater.

Participants stopped at the Federal Reserve for the final speaker.

After the march, people stopped at the library nearby to visit vendors.

The goal of the march was to "uplift, protect, and serve those who are most oppressed in the community -- especially trans women, gender-nonconforming people, black and brown women, and those with visible and invisible disabilities," a post from the Omaha Women's Day March says.

The event acts as a call to action for participants to gain perspective, looking beyond their own privileges in support of all women.

Thank you to Brandon Browning for footage of the event.

Watch KMTV at 10 p.m. Sunday for more coverage of the Women's Day March.