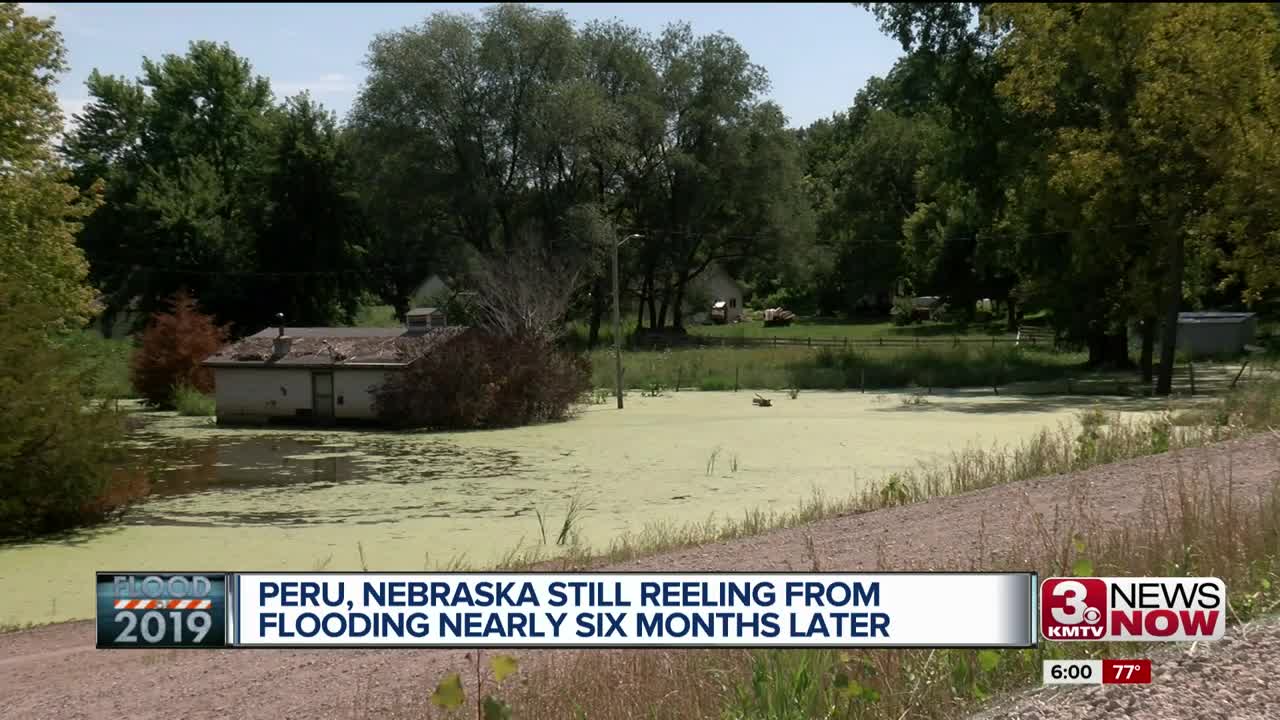 PERU, Neb. (KMTV) — The community of Peru is a small town in Nemaha County, Nebraska. Though it’s been nearly six months since flooding affected the area, parts of Peru are still flooded and the water isn’t leaving any time soon.

“The flood waters have receded and recovery has begun,” said Senator Slama. “We can’t start rebuilding and recovering until the water goes down and that could be a few several months. That’s the most valuable farmland in the state. That rich, fertile river bottom land.”

“Everybody is starting to rebuild and we’re not,” said Peru Mayor Darrin Reeves. “We’re not even to that point where we can rebuild. That’s the frustrating part.”
Peru is home to roughly 865 full-time residents but more than doubles in size when school is in session at Peru State College. Those on campus said March’s flooding is still on their minds.

“As you went down the hill and saw all the water it looked like the Great Lakes,” said Dr. Daniel Hanson, President at Peru State College. Dr. Hanson said campus life is back to normal following the spring flooding, though the campus is still trying to restrict water issues. He said multiple student organizations have helped with the cleanup over the past months.

“Even now still going down there and you see the water and you wonder if it will ever go away,” said Julia Zurek, a senior at Peru State. “I can’t even imagine it without it now that I’ve seen it for so long.”

Homes were destroyed in Peru and a water advisory was in affect in Peru from May until mid-August. The city is also currently using a temporary water treatment facility. The community is not out of the rough yet.

“The big key in Peru is fighting to get our levee repaired,” said Senator Slama. The senator wants the U.S. Army Corps of Engineers to make an exception to their manual and allow the levee to be fixed.

“The funds are there to fix the levee and get rid of this water.,” said Senator Slama. Thish flood, this levee’s failure was not caused by the failure to fill out a form. It was caused by unprecedented flows down the Missouri River in March of 2019.”

3 News Now will have more stories on Peru throughout the rest of the week. We’ll be looking at families affected by the flood, the water-shortage that affected the city and how Peru State College helped out during March’s flooding.