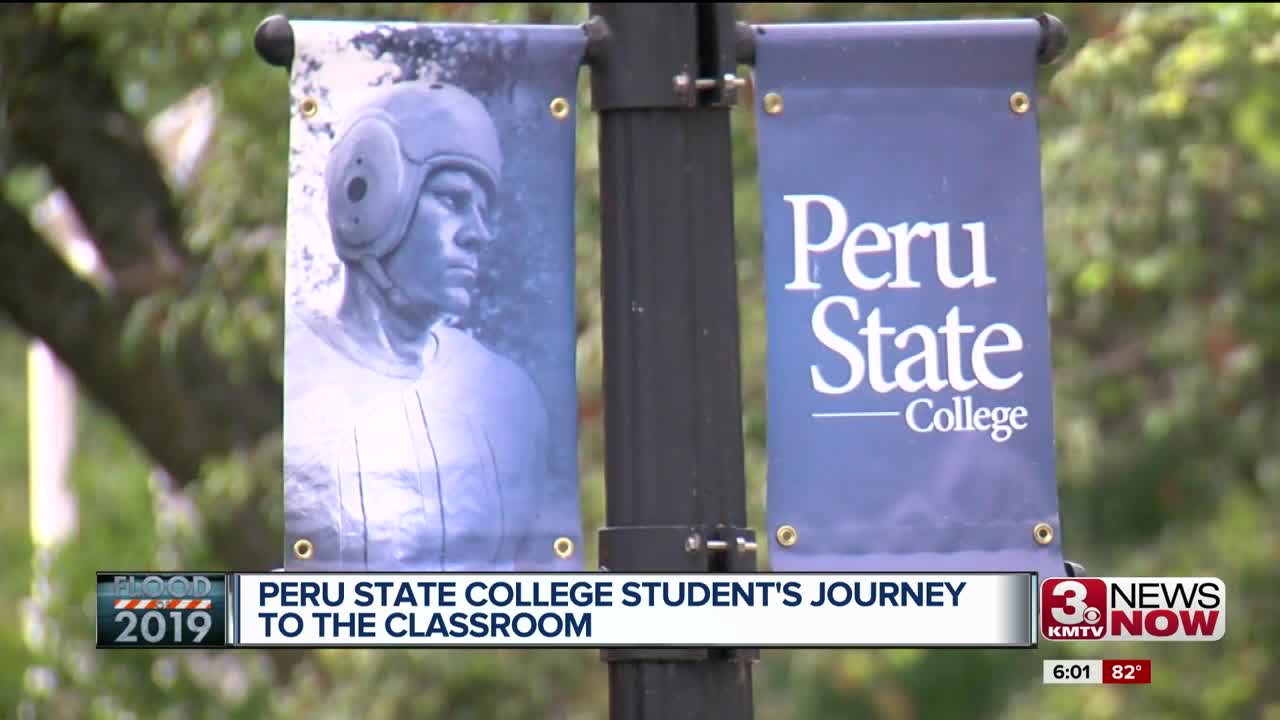 Sara Vance, a mom of two, moved in to the dorms at Peru State during a five week period

PERU, Neb. (KMTV) — Peru State College is a campus of 2500 in Peru, Nebraska. The college is the oldest in Nebraska.

"This is a community and it really is in all intents and purposes friends and family go to school here," said Sara Vance, an education major at the school. Vance is not your typical student. The mom of two, she has a four-year old and a 19-year old who is in the Marines, came back to get her teaching degree. She drives roughly an hour each way for class from her hometown of Shenandoah, Iowa. Vance also worked at the Henry Doorly Zoo in Omaha. She was on track with her classes, but everything looked to changed after flooding hit Peru in March.

"I was getting ready to come to class and my GPS says it's going to take four hours to get to school, one way," Vance said.

"And her commute went from 20-25 minutes to several hours and it wasn't workable for her," said Dr. Dan Hanson, President at Peru State College.

Sara and her family had a choice. She could leave school with five weeks left in the semester and return in the fall or find another option and continue with her classes.

"I chose school, I chose to continue with this dream," said Vance, who hopes to teach high school science to ninth and tenth graders in an inclusive environment that combines special education students with traditional learners.

Peru State College came to her with an option. She was allowed to move in to the dorms and live in a bedroom, fit with its own bathroom, for the remainder of the semester rent-free.

"We made housing available on campus immediately and we weren't going to charge anything to make them stay," Dr. Hanson said.

"I would actually pack up and for five days out of the week I would live at Peru in the dorms for the first time in my life," Vance said.

For Vance, living in the dorms was an adjustment. Used to raising a 19-year old son, the mom was now living with 19-year old girls. Her motherly habits continued in the residence hall.

"They called me the dorm mom because whenever they needed band-aids with smiley faces on them they'd come to me," Vance said.

But the choice took its emotional toll back home. Her four-year old son was still too young to fully comprehend why his mom was leaving him during the week.

"I'd call them at night and he wouldn't want to talk to me and that broke my heart," Vance said.

"We have our largest freshman class in over 30 years and things are going really well," said Dr. Hanson.

Sara is back living at home and is one step closer to receiving her degree. When Highway 2 opened back up this summer, Vance said she and her family celebrated by going out to dinner together in Nebraska City. This fall, both her and her four-year old son are in school and they get to tell each other what they learned in class.