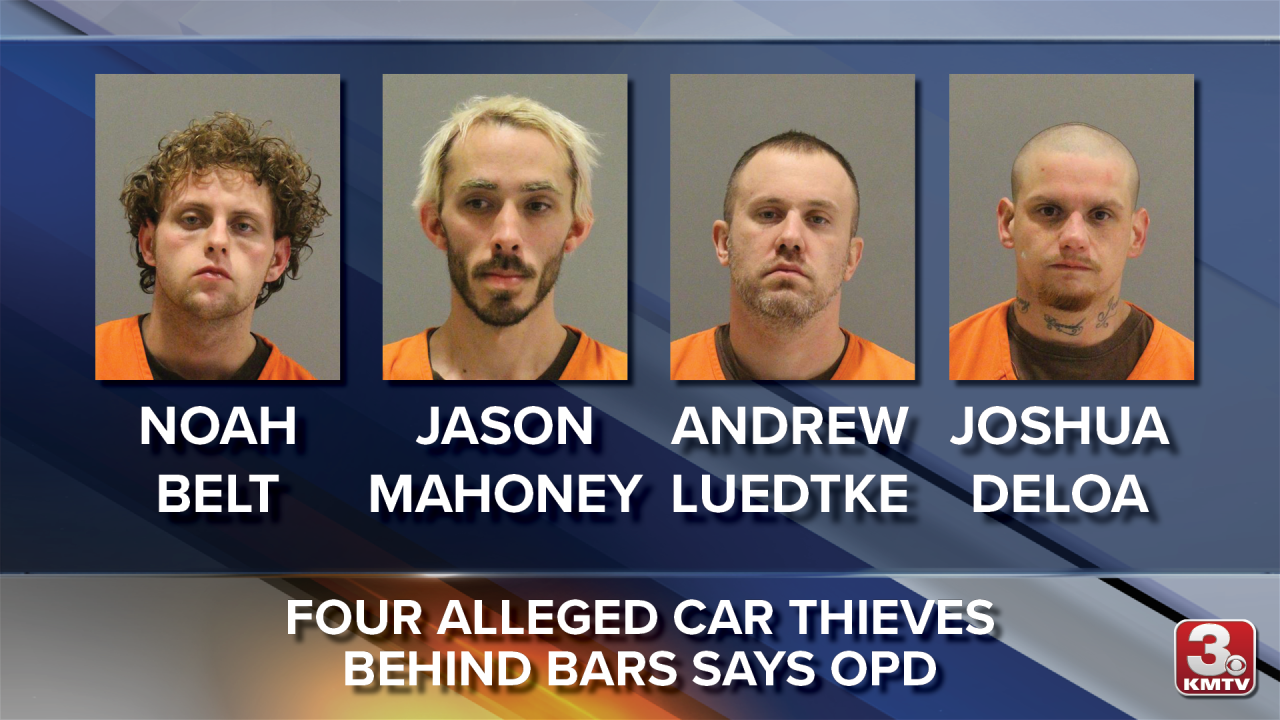 OMAHA, Neb. (KMTV) — The Omaha Police Department says it all the time and once again they are urging people to not leave their cars running and unattended after four suspected-car thieves were taken into custody last week.

On Thursday January 9th, 2020 at 08:30 am, Officers received a radio call to investigate suspicious activity at Comfort Inn, 10729 J St. Upon arrival, officers observed a white Toyota Tundra with no plates (one occupant) parked next to a white Honda CRV (two occupants). Contact was made with a male passenger of the Tundra who tried walking off upon seeing officers. The male was identified as MAHONEY, Jason. A passenger of the Honda CRV jumped into the Toyota Tundra and sped off. A male seated in the driver seat of the Honda CRV was taken into custody and identified as BELT, Noah. The Honda CRV was reported stolen. MAHONEY was found to have a stolen checkbook and laptop computer in his possession.

Both suspects were transported to Central Station to be interviewed by Auto Theft Unit Detectives. MAHONEY was ultimately booked for possession of financial transaction device, theft by receiving less than $500, and criminal impersonation. BELT was booked for theft by receiving over $5,000.

At 11:26 am Officers received a radio call to Lewis Enterprises, 4104 S. 90th St, for an abandoned vehicle. Officer located the white 2019 Toyota Tundra abandoned on the property. Employees stated that a male was observed running from the truck around 08:30 am. The Tundra had been reported stolen on 03 JAN 20 (AP19447).

Officers are currently working on a warrant for the individual involved that fled the scene in the Toyota Tundra.


On Saturday, Janury 11th, 2020, at 6:38 pm, officers were driving through the La Quinta Inn parking lot running license plates and looking for stolen autos. They located two stolen autos in the parking lot, and while investigating, two parties that officers recognized as stealing another car (Dodge Durango) walked into the parking lot. One suspect, LUEDTKE, Andrew was taken into custody without incident, and the other, DELOA, Joshua, ran from officers and was taken into custody. Both parties had methamphetamine and car keys to a respective stolen auto in their possession.

Detectives drafted a search warrant for a room the suspects were staying in and evidentiary items were located in the room.

Police say you should remove all valuables from your vehicle in addition to not leaving it running and unattended.