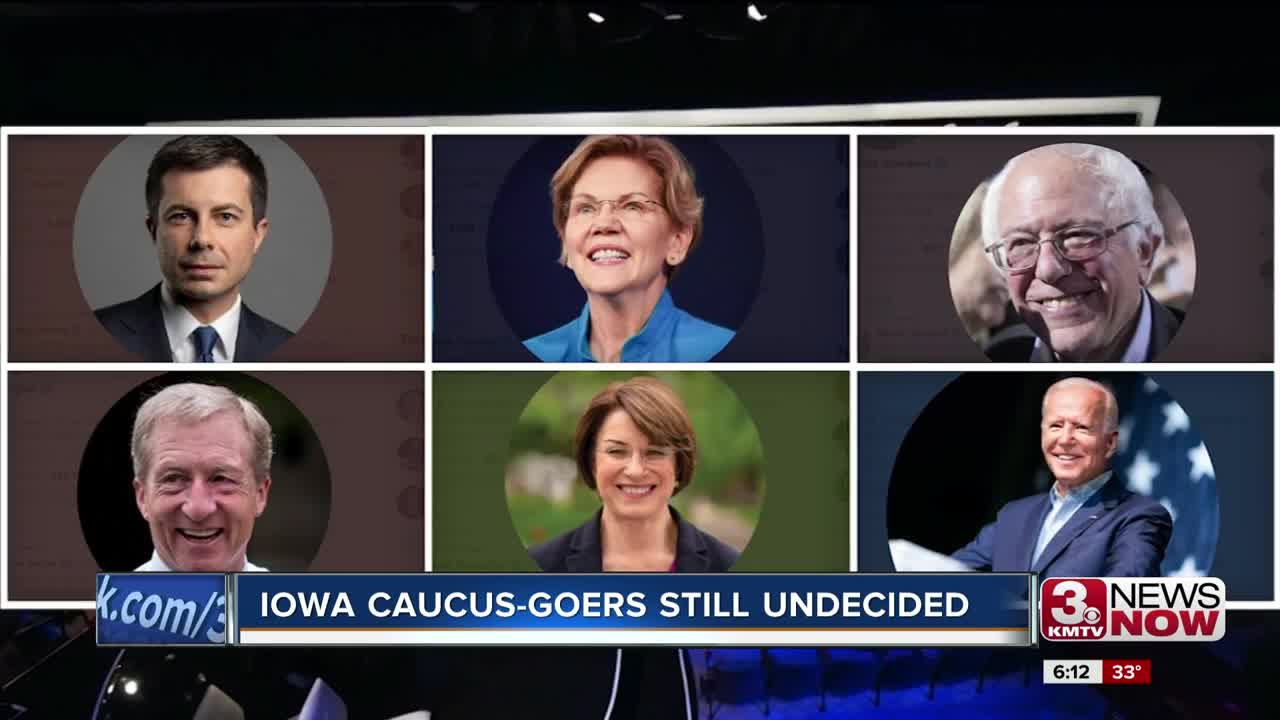 COUNCIL BLUFFS, Iowa (KMTV) — It's a tight and fluid race heading into the final week in Iowa for a lot of reasons. Bernie Sanders is attracting 26% support, with Joe Biden at 25%, as the top preferences of likely caucus goers. Pete Buttigieg is right there within striking distance at 22%. Elizabeth Warren has 15% support and Amy Klobuchar has 7%, but because of the way caucuses work, these are critical numbers with implications for the race.

Party rules make 15% the typical cutoff for awarding delegates, and supporters can shift to other candidates if they don't reach this threshold. So, it's critical to look at voters' second choices and who else they're considering, too.

Iowans still have time to change their minds and the Iowa poll suggests they may. Sixty percent of caucus-goers say they’re undecided.

“I'm not surprised, we have a very large field of qualified candidates,” said Jill Shudak, the Vice Chair of Pottawattamie County Democrats.

She said this year, people are considering more than just who’s beliefs better match their own.

“Who can beat Trump is playing more of a factor this year,” Shudak said. “I know I have a few friends who are still very undecided. When I speak to them, they are down to two or three candidates. Its more weighing out who can beat Trump that’s going to make their final decision.”

She thinks everyone's chances are still pretty good in Iowa.

“The sentiment from a democratic perspective is any of them would be better than Trump at this point in time,” Shudak said.

Most Iowa Democrats do not think candidates who have to be in Washington for the Senate impeachment trial will suffer much of an impact on their fortunes in Iowa.

Biden and Sanders have improved on their perceived electability among Iowa Democrats in recent weeks. More now think each would "probably win" against Trump than said so earlier this month, particularly of Biden. They are more confident (71%) now than they were in November (62%) that the party will nominate someone who can defeat Trump.

All of the four top candidates are seen as being able to handle political attacks from Trump at least somewhat well, but Sanders leads on handling them potentially very well. However, Warren has dropped on this measure since October.

Across the Super Tuesday states — the big delegate haul that comes after opening contests in Iowa, New Hampshire, Nevada, and South Carolina — the top tier remains Biden, Sanders, and Warren. Warren currently polls better across those contests than she does in Iowa, bolstered by support from college-degree-holding and post-graduate voters, and she runs even with Sanders among the very liberal.

CBS News contributed to the contents of this article.