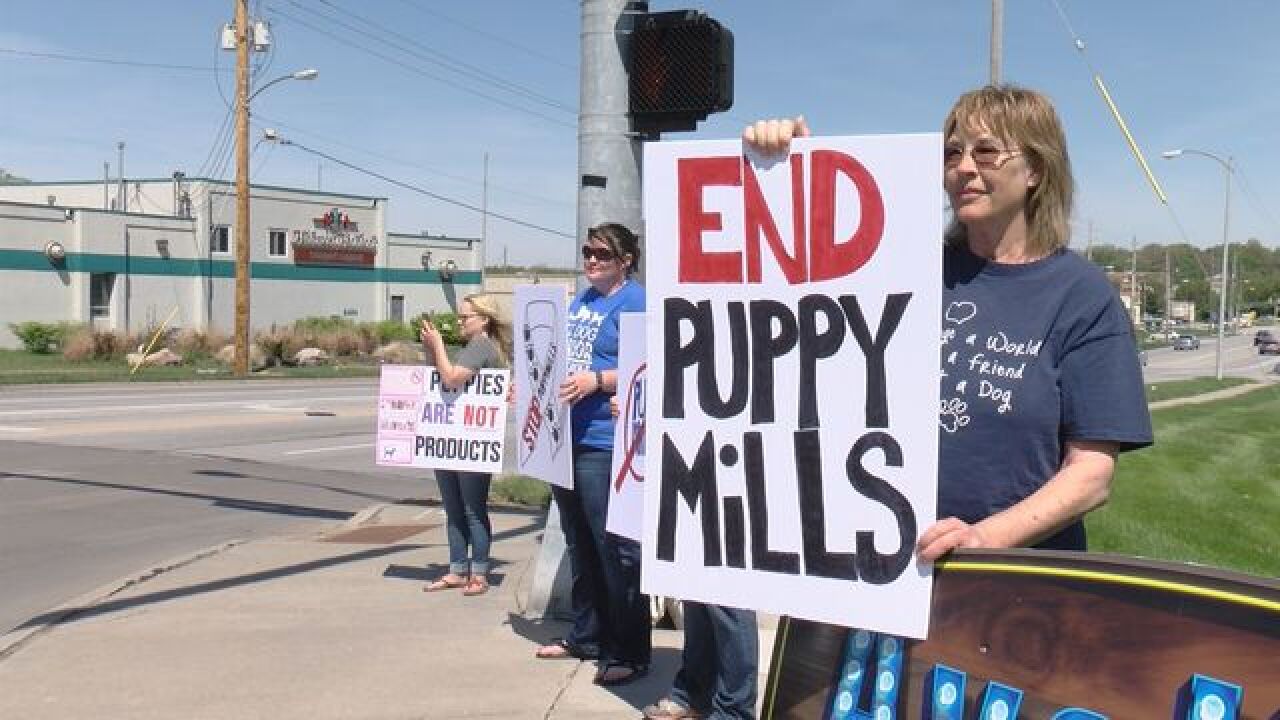 “Nobody wants problems.  We’re all dog lovers.  The only way you can be in this business is to be a dog lover,” said Tom Westman, operations manager of Tully’s Kennels, which sells puppies from breeding facilities.

“If somebody has a problem where it looks like the dogs aren’t being taken care of, we don’t do business with them,” declared Westman.

Nebraska law allows for commercial breeders that are subject to licensing and inspection every two years.

But Bailing Out Benji, a national animal welfare group, says that many of the puppies sold in local pet stores come from breeders that treat their dogs inhumanely.

“A lot of people think that a lot of their breeders are reputable, but if you go and actually visit the site, a lot of them won’t even show you because the conditions are so deplorable.  The dogs are kept in tiny cages, they’re not fed, they’re not provided medical care.  It’s just bad,” said protestor Samantha Stalnecker.

According to the group, 99% of the puppies come from puppy mills – a term for breeding facilities that crank out puppies without concern for the moms and dads or their conditions.

The group was joined by Hands, Hearts, and Paws; Hearts Untied for Animals; and other area rescues to protest two Omaha stores – Pets R Us in Rockbrook Village and Tully’s Kennels.

Westman says that Tully’s only uses breeders they’ve known for years and is just as opposed to puppy mills.

“Shut ‘em down.  Shut ‘em down. You know what, it makes me sick as a dog lover to try to see these dogs and see them a in a condition where they’re not being taken care of,” said Westman.

An unnamed Pets R Us employee also stopped at the protest to defend her store.

“I understand.  I don’t support puppy mills either, but why does my store have to be the brunt of what you’re doing,” said the employee.

“There’s two stores in Omaha that sell puppies from mills,” a protestor countered.

“Not me,” returned the employee.