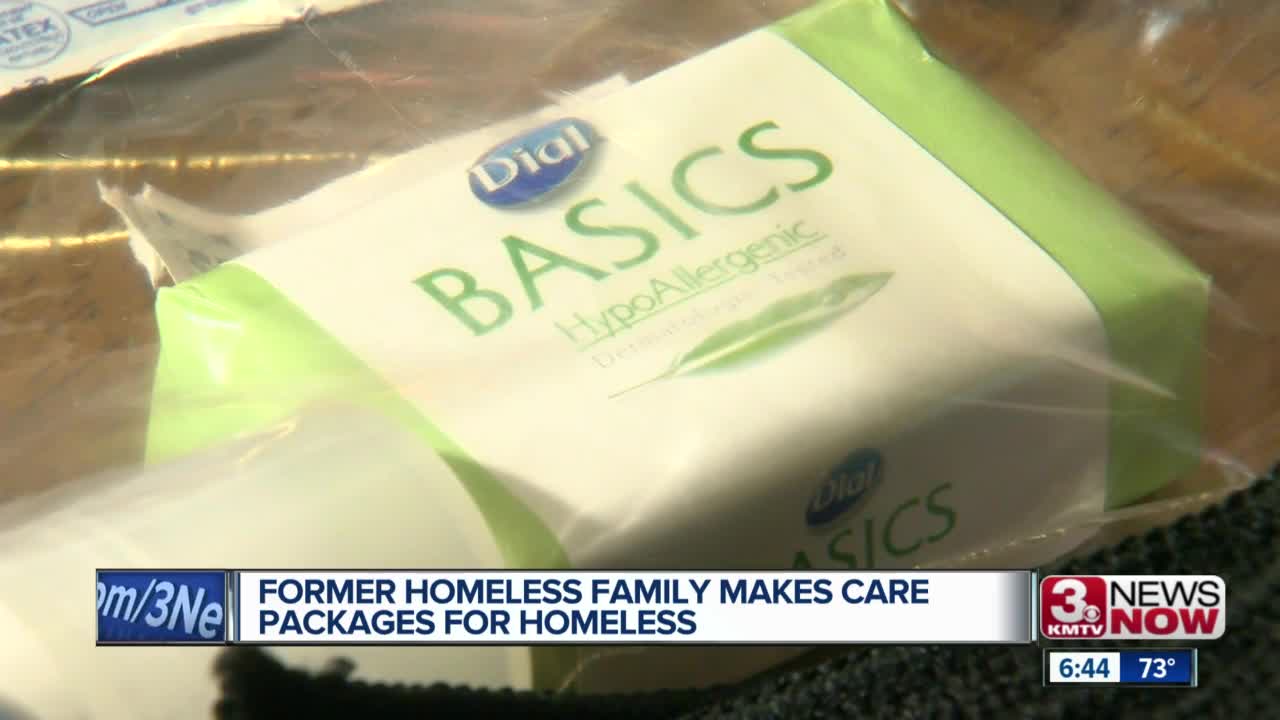 COUNCIL BLUFFS, IA (KMTV) - A Council Bluffs family, which used to be homeless a year ago, is making care packages for the homeless.

Angela Golden and her six kids, who range from ages 3-17, have spent the last month buying supplies and stuffing them in Ziploc bags to hand out to individuals in need.

The act of kindness sparked after the oldest son, Matthew, saw a homeless woman sleeping on a park bench. She was in a wheelchair and it was evident to him that she had nowhere to go and very little belongings.

He bought the woman food from McDonalds, where he and his brother Ryan work. She was so appreciative of the gesture, which for Matthew, sparked the desire to do more to help others.

The family decided to begin doing care packages with toiletries, filled with items such as toothbrush, toothpaste, band-aids, sunscreen soap, granola bars, a bottle of water, wash cloths, and for the ladies - a brush and hair ties.

“I’m surprised it took off the way it did,” said Golden. “We are a large family on a single-family income. So we aren’t necessarily fit to feed hundreds of people but we like to do what we can for everyone so in the last month we’ve just kind of collected certain things, whether it’s from the dollar store, or we’ve had luck with people volunteering to bring some things, and just started making the bags.”

Golden says seeing someone on the street who clearly needs assistance hits close to home for the family. Just a year ago, the family was struggling to find where to live, and would often stay at hotels or with friends.

In order to pay for the bags, Golden uses some of the family’s income. The two oldest boys also contribute some money from their paycheck. Friends and family have also begun donating toiletries and snacks to be used for the bags, and others have donates money to help buy more supplies.

“It takes about $5 to make a bag. I had a girlfriend donate $20 to the cause - I made four bags out of that. I just made four people’s day by putting in those $20. It isn’t even that it costs that much. So it’s worth the time to sit down and make the bags because it makes a huge difference,” says Golden.

The family carries four to five bags in the car and hands them out in Council Bluffs and Omaha.

Each time they encounter someone new, Golden thinks of the help she received a few months ago to help them find a home, especially from a woman who donated furniture to them.

“I have a sign hanging on my wall that says Simplify. And she gave it to me. That has a whole new meaning when you’ve gone through homelessness with six kids,” said Golden. “We don’t have everything we want, but we have everything we need. And we live life a lot more simple. And I've kept that sign as a reminder. Simplify us and we can show love to a lot more people and that’s what the whole thing was supposed to be about.”