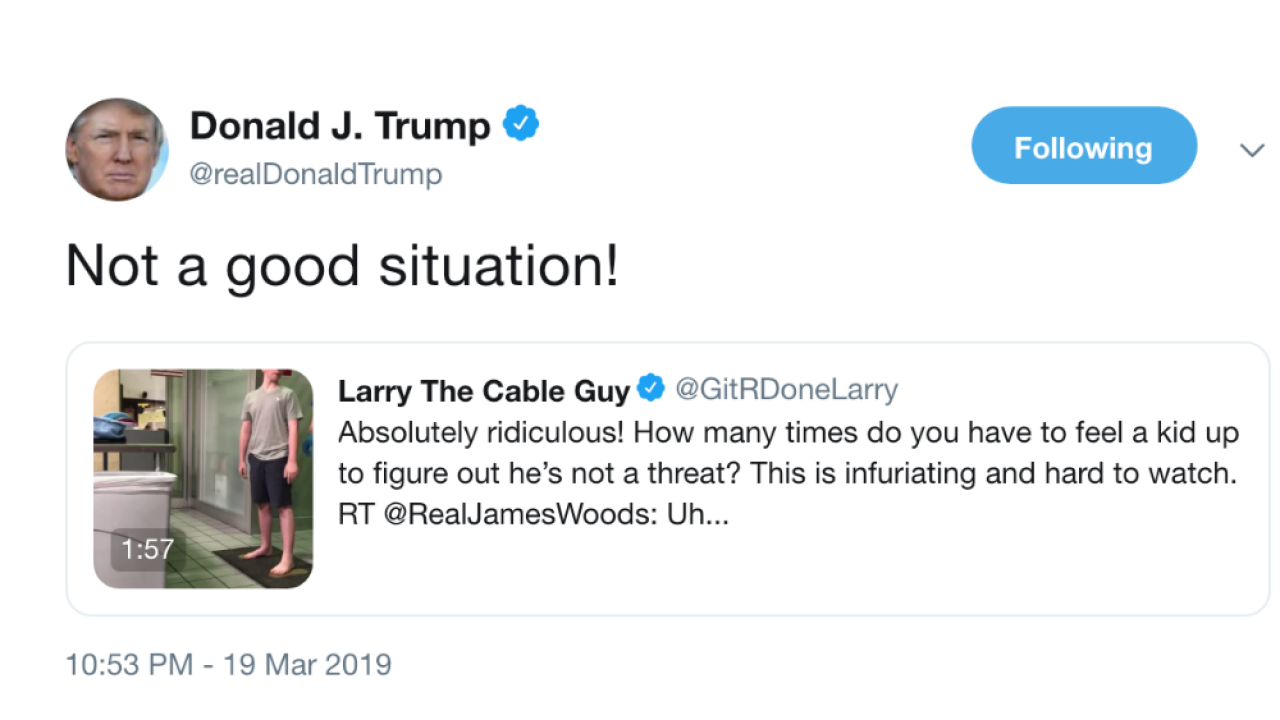 On Tuesday evening just before 11 p.m. Eastern, President Donald Trump retweeted a video that appeared to show young boy being searched by TSA agents at an airport security checkpoint. The two-minute long video showed the agent thoroughly patting down the boys legs, backside and even checking the waistband of his shorts.

The video had originally been tweeted by actor James Woods and comedian Larry the Cable Guy.

"Absolutely ridiculous! How many times do you have to feel a kid up to figure out he’s not a threat? This is infuriating and hard to watch," Larry the Cable Guy tweeted.

"Not a good situation!" Trump added.

The video Trump retweeted on Tuesday isn't new — in fact, it is about two years old. And according to the Trump administration, the video isn't out of the ordinary.

The video first surfaced in March of 2017 when a Texas woman posted the video of her 13-year-old son being patted down at the Dallas/Fort Worth International Airport. The mother wrote that the pat-down was part of a 45-minute security screening set off by her son's laptop.

At the time, the mother claimed TSA singled out her son because he forgot to take his laptop out of his suitcase for separate screening, and that the 45-minute delay caused the family to miss their flight.

In a blog post , TSA said the laptop triggered an alarm on an explosives trace detection machine, which prompted the pat down and the additional screening. The blog also added that the 45-minute wait included the time it took to explain the procedures to the mother, in addition to the time it took to hand-search three bags.

Not a good situation! https://t.co/uaMcSrX4yM

The video appears to have resurfaced after a conspiracy Twitter account tweeted the video on Monday afternoon. Contrary to the TSA — which is run by the Trump administration — the account claimed, without evidence, that the boy had been "detained" and that the TSA agent had "fondled" the boy.

According to the boy's mother in 2017, he had not been detained by the TSA — the family was given the option to leave the airport if they did not agree to the search. In addition, the video was consistent with the description of a pat down provided on the TSA's website.

The video was retweeted 4,000 times from the conspiracy Twitter account. It then caught the eye of Woods, an outspoken conservative and Trump supporter. His tweet got the video 6,000 more retweets. Larry the Cable Guy then retweeted James Woods' version of the tweet early Tuesday morning, spreading it further.

Trump's Tuesday evening tweet has now been retweeted 15,000 times. Since the video resurfaced on Monday, it's been viewed about 3.5 million times.