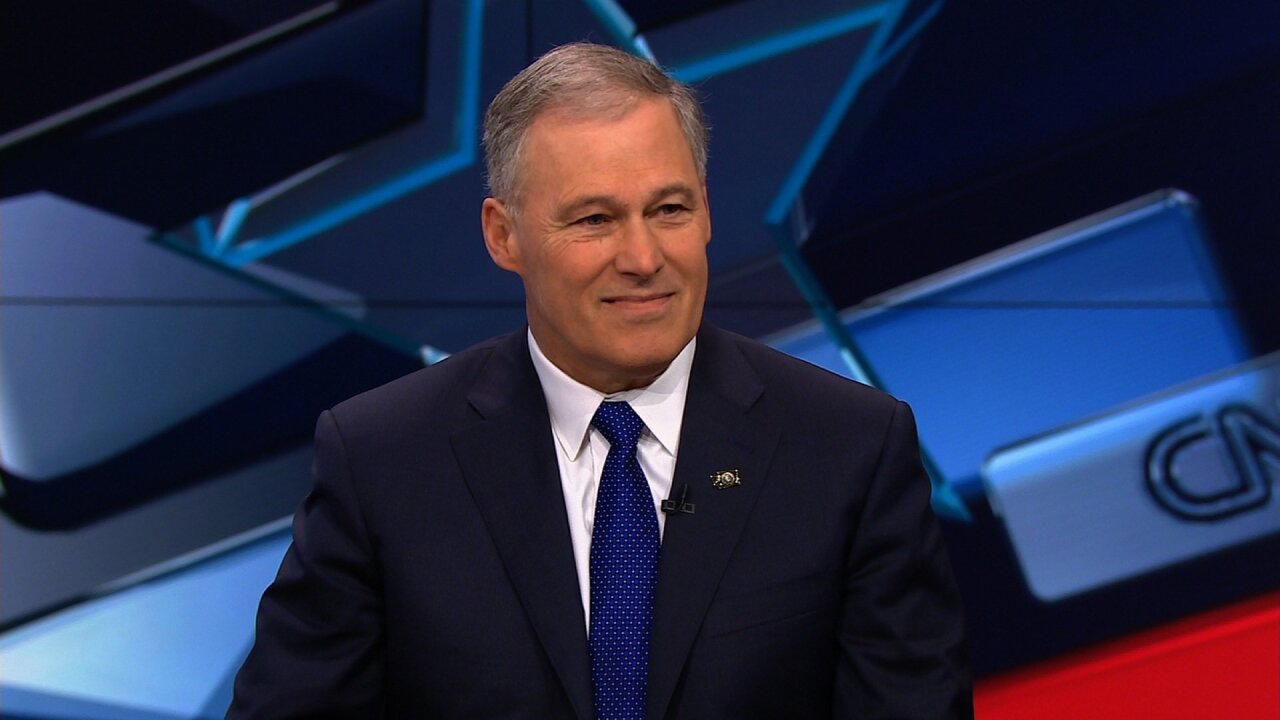 Washington state Gov. Jay Inslee announced Friday that he is running for President, launching a bid in which he intends to make combating climate change the central rationale for his campaign.

Inslee announced the bid in a video made public on Friday. He is slated to hold a news conference in Seattle at a solar panel installer to expand upon his presidential announcement. He will be surrounded by friends, family and business owners who the campaign says have benefited from his climate policies in the state.

"I'm Jay Inslee and I'm running for president because I am the only candidate who will make defeating climate change our nation's number one priority," the governor says in a more-than-a-minute-long video that highlights his decades-long focus on climate change and compares tackling the issue to President John F. Kennedy's focus on going to the moon.

"We're the first generation to feel the sting of climate change. And we're the last that can do something about it," Inslee adds. "We can do this. Join our movement. This is our moment."

The video ends with a string of straight-to-camera videos from voters and supporters saying, "Our moment." Among those featured is Bill Nye, the popular television star known as "Bill Nye the Science Guy," who often talks about climate change.

Inslee has been upfront about the fact that he has been exploring a presidential run for months. He now enters a crowded presidential field that boasts 12 other Democrats, including six senators, and could grow to more than 15 Democratic candidates in the coming months.

VIDEO: This is our moment, our climate, our mission — together, we can defeat climate change. That's why I'm running for president. Join #OurClimateMoment today https://t.co/zg8ILGyk0Z pic.twitter.com/pUZVxyzfc5

He will headquarter his campaign in Seattle, making his campaign the only 2020 operation to date to be based on the West Coast. He will follow up Friday's announcement with a trip to Iowa and Nevada in the coming days, an adviser added.

Inslee, who served as head of the Democratic Governors Association in 2018, traveled the country stumping for Democrats running for governor that year, but also used the trips to talk to Democrats about his platform focused on climate change. Inslee has told reporters and people close to him that he has been emboldened by what he has heard from those Democrats and believes there is a hunger in the country for someone with a singular focus on climate change.

"We know we have to have a candidate who will make climate change and building a clean energy economy a central focus, an organizing principle for the American people and we need a president who will do the same," Inslee told CNN in February.

"I am excited about this because, as I have traveled the country, I hear people waiting for the bugle call from the White House," Inslee continued. "We heard it from Kennedy when he said we are going to go to the moon. We need a similar bugle call to the American people on this."

Inslee has been in elected office for much of the last three decades. He was first elected to the Washington House of Representatives in 1989 and was first elected to the US House of Representatives in 1992. Inslee, though, lost his re-election bid in 1994, an election cycle called the "Republican Revolution" after the party picked up 54 seats in the House.

Inslee, by raising the minimum wage in Washington state, helping to pass a statewide paid family leave law and enacting a moratorium on the death penalty, has been an outspoken progressive executive since he became governor in 2013. But his profile truly rose after the election of President Donald Trump. After the President's inauguration in 2017, Inslee became a vocal opponent of the Republican leader, including by suing him after Trump tried to ban immigration from several Muslim majority countries.

Although Inslee has looked to make Washington state more carbon neutral during his time in office -- including by investing in a statewide fund that looks to help business go green in Washington -- the governor failed to enact a statewide carbon tax in 2018, delivering a stinging defeat for environmentalists after years of attempts to curb climate change through economic incentives. The proposal, which voters rejected by 13 percentage points, would have levied a tax of $15 per metric ton of carbon emissions, making Washington the first state in the nation to raise the cost of fossil-fuel-intensive activities.

Inslee's time as chair of the Democratic Governors Association during the 2018 cycle helped raise his profile, too. The year saw Democrats pick up seven governorships across the country, a fact that the governor has touted in the wake of the midterm elections.

He faces a significant level of skepticism from Republicans on climate change. Trump, as President, has left the Paris Climate Accord and has said he does not believe government reports that cast grave warnings about the impact of climate change. Republicans now hope to make Democrats' focus on the issue, namely through the newly proposed Green New Deal, central in their attacks against the party in 2020.

Inslee largely dismisses Trump's comments on climate change, arguing that the President doesn't understand where the American people are on the issue, especially young people.

"Donald Trump, fundamentally, is just fearful and pessimistic," he told CNN. "He doesn't think we are smart enough to do this. He is just wrong about the American people."

Inslee has praised the Green New Deal, saying it is "raising people's ambitions" and "making what might seem impossible within the realm of the possible," but the governor has not outright said he would support the entire package.