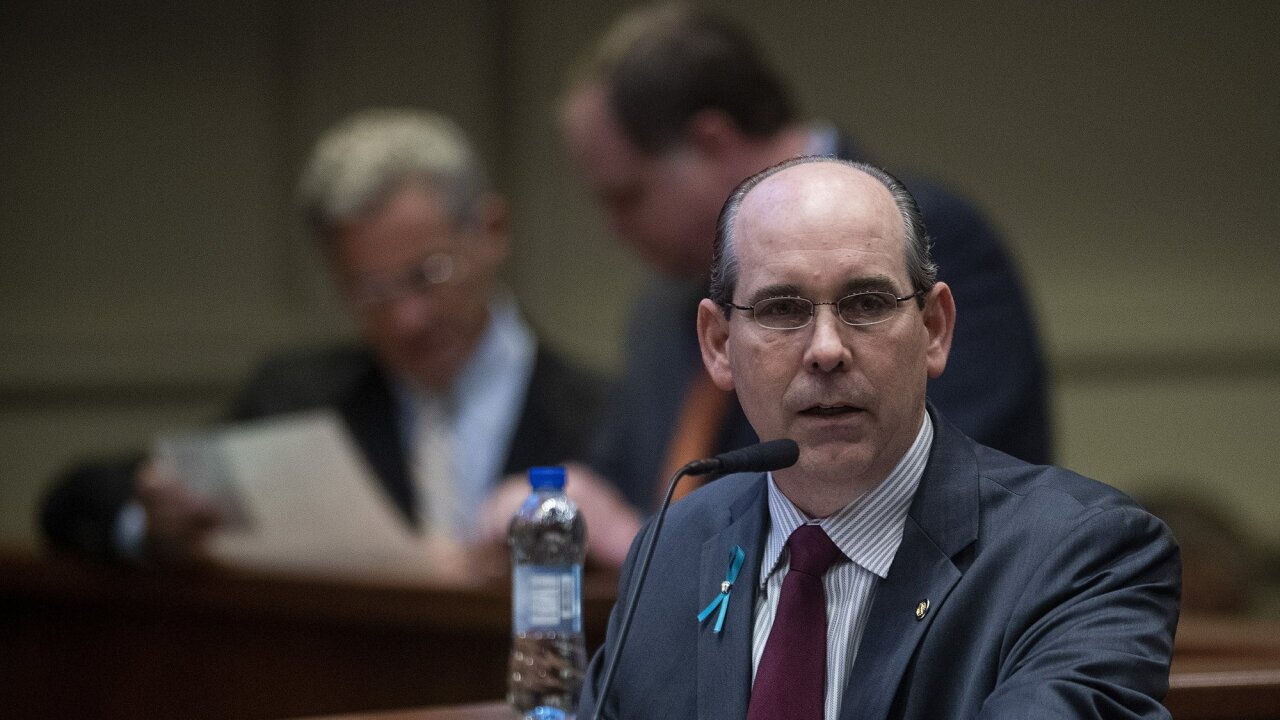 (Mickey Welsh/Montgomery Advertiser via AP)
Sen. Clyde Chambliss speaks as debate on HB314, the near-total ban on abortion bill, is held in the senate chamber in the Alabama Statehouse in Montgomery, Ala., on Tuesday May 14, 2019. Alabama lawmakers are expected to vote on a proposal to outlaw almost all abortions in the state, a hardline measure that has splintered Republicans over its lack of an exception for pregnancies resulting from rape or incest. Rep. Collins is the sponsor of the bill.

MONTGOMERY, Ala. (AP) — Alabama’s Senate passed a near-total ban on abortion Tuesday, sending what would be the nation’s most stringent abortion law to the state’s Republican governor.

The Republican-dominated Alabama Senate voted 25-6 for the bill that would make performing an abortion at any stage of pregnancy a felony punishable by up to 99 years or life in prison. The only exception would be when the woman’s health is at serious risk.

The measure now goes to Gov. Kay Ivey, who has not said whether she supports the measure.

Supporters said the bill is intentionally designed to conflict with the U.S. Supreme Court’s landmark 1973 Roe v. Wade decision legalizing abortion nationally, because they hope to spark a court case that might prompt the justices to revisit abortion rights.

“The question for me — for us — is: When is a person a person?” Republican Sen. Clyde Chambliss said as debate began on the proposed ban.

Senators rejected an attempt to add an exception for rape and incest. The amendment was voted down 21-11, with four Republicans joining Democrats in the seeking the amendment.

“You don’t care anything about babies having babies in this state, being raped and incest,” Democratic Sen. Bobby Singleton said angrily after the amendment’s defeat. “You just aborted the state of Alabama with your rhetoric with this bill.”

The bill’s sponsor and other supporters had argued exemptions would weaken their hope of creating a vehicle to challenge Roe.

Emboldened by conservative justices who have joined the Supreme Court, abortion opponents in several states are seeking to challenge abortion access. Kentucky, Mississippi, Ohio and Georgia have approved bans on abortion once a fetal heartbeat is detected, which can occur in about the sixth week of pregnancy.

“Our bill says that baby in the womb is a person,” Republican Rep. Terri Collins, the bill’s sponsor, said Monday.

There would be no punishment for the woman receiving the abortion, only for the abortion provider.

The text of the bill likens abortion to history’s greatest atrocities, including the Holocaust.

Democrats, who hold a mere eight seats in the 35-member Senate, criticized the proposed abortion ban as a mixture of political grandstanding, an attempt to control women and a waste of taxpayer dollars.

The debate became emotional at times as Singleton pointed out and named rape victims watching the debate from the Senate viewing gallery.

Singleton said doctors who perform abortions could serve more prison time, under the proposed ban, than the women’s rapists.

“This is nothing but a political game and women are the pawns,” Staci Fox, CEO and President of Planned Parenthood Southeast. “Let’s be honest, banning abortion does not stop abortion. It stops safe and legal abortion.”

A crowd of about 50 people held a rally outside the Alabama Statehouse, chanting, “Whose choice? Our choice.”

Several women dressed as characters from the “The Handmaid’s Tale,” which depicts a dystopian future where fertile women are forced to breed.

If signed into law by Ivey, the bill would take effect in six months. Critics have promised a swift lawsuit. Randall Marshall, executive director of the American Civil Liberties Union of Alabama, said a complaint is being drafted to challenge the ban.

Ivey has not publicly said whether she will sign the bill if it’s approved by lawmakers.

“The governor intends to withhold comment until it makes its way to her desk for signature,” deputy press secretary Lori Jhons wrote in an email prior to Tuesday night’s vote.